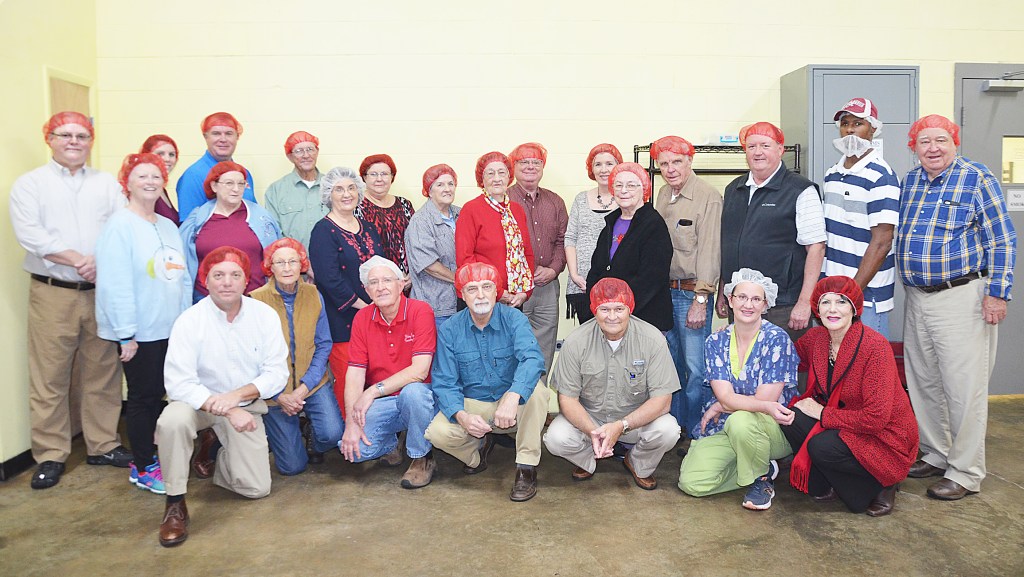 The Pike County Chamber of Commerce Farm-City and Business Development committees toured Whaley Pecan Company last week as part of the Chamber’s efforts to better inform its committee members about the businesses that are moving Pike County forward in the 21st century.

Whaley Pecan Company goes back to 1937 when Lester Whaley, grandfather of the current owner, Bob Whaley, bought a building that contained a pair of platform scales, a counter, a typewriter and some fruit tables. Along with selling fruit, Whaley began buying and reselling pecans.

That’s how Whaley’s Pecans started 80 years ago and the Troy company continues   to move forward as one of the premier pecan companies in the country today.

Two arms of the Pike County Chamber of Commerce, the Farm-City and Business Development committees, toured Whaley’s Pecan Company before Christmas and expressed amazement at the changes that have been made over the years and the growth the company has experienced, said Kathy Sauer, Chamber president.

“It was amazing to learn that pecans were bringing from 4 cents to 8 cents a pound in 1937 and that Whaley’s bought 95,000 pounds during that fall to haul to handlers in Georgia to be sold to uses and shellers over the country,” Sauer said. “Purchases and sales increased and Whaley Pecan Company became firmly established.”

Ed Whaley joined his father in the business in 1952. The Company continued to modernize equipment and increase production. Before long, the plant was shelling more than a million pounds per season. Whaley Pecan Company became a well-known and respected processor and shipper throughout a multi-state area.

Melissa Boatner, operations manager, said her father and grandfather, cleared the land for what is the present site of Whaley Pecan Company. Within a few years, an entirely new facility was built that was designed specifically for pecan shelling and processing. The new plant featured state of the art equipment and contained many innovations, which helped improve production and lower labor costs.

New additions were added increasing production and office space. In order to guarantee high quality and year around shipments, two on-site freezers were built enabling Whaley to store and ship large volumes to customers throughout the United States. Another 5.000 square foot addition has been added to provide additional packing and shipping space for the Specialty Trade Division.

In 2016, Whaley’s Pecan expanded their capabilities with the purchase Joe C. Williams mail order catalog line and their confection line after the owner, Joe Williams passed away.

Boatner said Williams’ daughter decided to sell to Whaley’s, a long-time partner. Purchasing the Joe C. Williams Company that had been in business over 60 years was a natural and innovative decision. The mail order catalog reaches customers throughout the United States who want pecans, pecan candies and gifts.

Whaley and been sending pecans to Joe C. Williams for their miniature pecan pies for decades so when the buying opportunity was available, Boatner, laughing, said she didn’t hesitate to “buy the whole she-bang.”

With the expansion and setting up the new division in Troy, Whaley’s Pecan now has the capabilities of producing 4,000 miniature pecan pies a week.

The Chamber group stayed around for pecan pie and coffee and to do some Christmas shopping.
“The diversity that we have in business and industry in Troy and Pike County is amazing,” Sauer said. “And, we congratulate the Whaley family that, for generations, has been a part of the growth of, not only their own business, but the growth of Troy. We thank all of those at Whaley’s who made our tour such an informative and delightful experience.”