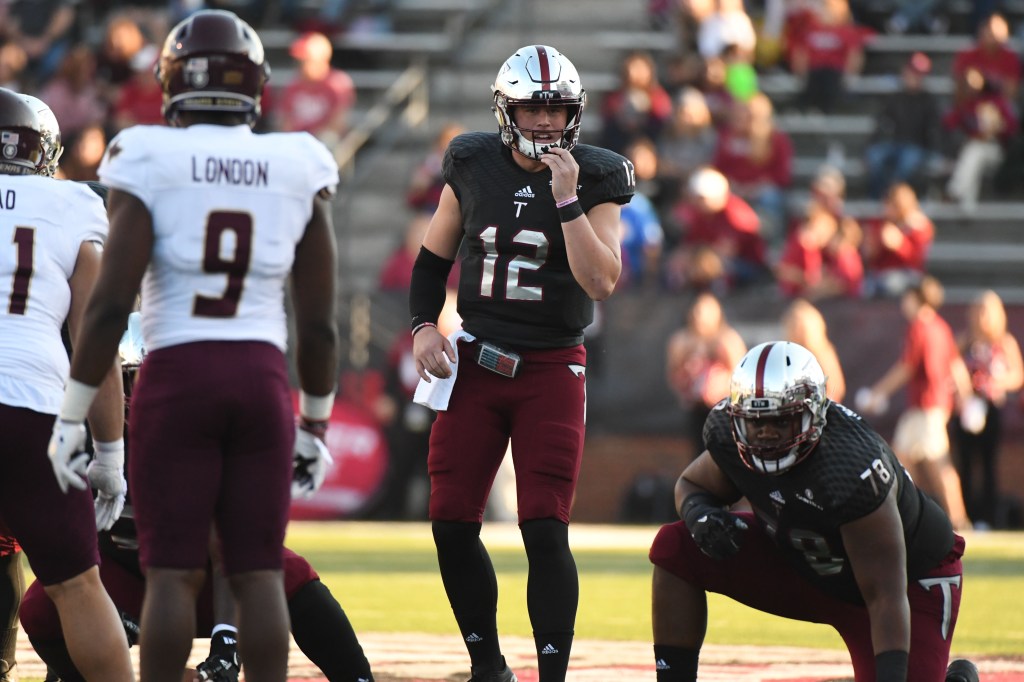 Troy quarterback Brandon Silvers (12) prepares for a play during the first half of an NCAA college football game against Texas State in Troy, Ala., Friday, Nov. 24, 2017. (Photo/Thomas Graning)

Following a record-breaking career, Troy quarterback Brandon Silvers is headed to the Reese’s Senior Bowl. It marks the second-straight year for a Trojan in the premier all-star game after offensive lineman Antonio Garcia played in the game last season; Garcia would go on to be selected in the third round of the NFL Draft by the New England Patriots.

Senior Bowl week begins Tuesday, Jan. 23, at Mobile’s Ladd-Peebles Stadium with the game scheduled for Saturday, Jan. 27, at 1:30 p.m. The game will be televised live on NFL Network.

A four-year starter for the Trojans, Silvers finished his career as Troy’s all-time leader with 87 career touchdowns responsible for (71 passing and 16 rushing), while finishing second in school history with 10,684 passing yards, 969 completions and 11,099 yards of total offense. His 71 touchdown passes are the third most in Troy history and the fifth most in Sun Belt Conference history, while his completion total is the second most in league history.

Silvers ended his career in true fashion as he was named the MVP of Troy’s 50-30 victory over North Texas in the New Orleans Bowl. The native of Orange Beach, Ala., completed 24-of-31 passes for 305 yards and four touchdowns, while rushing for another score in Troy’s second straight bowl victory.

He led the Trojans to a 21-5 record over the past two seasons, including a Sun Belt Conference title and a victory at LSU this season. Silvers started 48 of a possible 50 games in his career and completed 64.4 percent of his passes with just 29 interceptions; one every 51.9 pass attempts.

Silvers broke Oklahoma’s Sam Braford’s NCAA freshman completion percentage record as he completed 69.5 percent of his passes. He was named to the All-Sun Belt First Team following his junior season after leading the league with 23 touchdown passes.