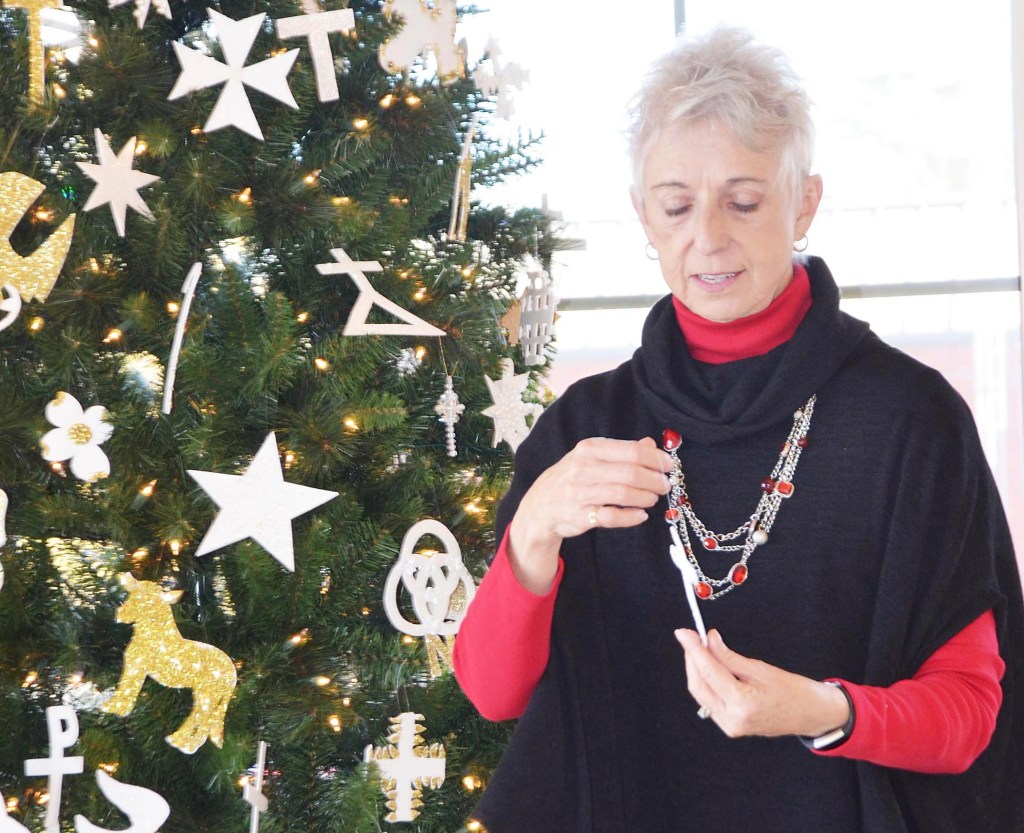 Claire Murphy, a docent at the Johnson Center for the Arts in Troy, often speaks to groups that visit the art center about the history of the Chrismon Tree and the symbolic ornaments that tell the story of the life of Jesus and the hope that His birth brought to the world. The Chrismon Tree is one of 10 Christmas Trees that comprise the JCA’s annual Christmas Tree Extravaganza.

The Johnson Center for the Arts’ annual Christmas Tree Extravaganza features a 20-foot tree as the focal point of the exhibit of Christmas trees that are decorated with ornaments handmade by students from the city and county school systems.

Over the years, other Christian symbols have been incorporated – crosses, stars, figures, numbers, artifacts, creatures, plants, flowers and more.

“Any symbol on the tree must, first of all point to our Lord and God,” Murphy said. “All Chrismons are made in either white or gold or in a combination of the two colors. White suggests the innocence, purity and perfection of Jesus. It is the color of joy. Gold represents the glory and majesty of God and the Son of God.”

A touch of red can be used as a reminder of the blood of Christ and the green evokes thoughts of life, growth and immortality, Murphy said.

“”Chrismons can be utilized in other ways, such as wreaths, mobiles and to help others learn the stories of the Bible,” she said. “Special symbols are used to illustrate the Christian calendar year.”

Among the monograms are the Alpha and Omega Greek letters representing the first and last, the beginning and the end.

“God will be with us always,” Murphy said.  “‘IHS is an acrostic formed in Greek for Jesus Christ, Son of God, Savior. The Holy Trinity is represented in several ways – the equilateral triangle, shamrock, a shell with three drops of water and three entwined circles.

Plants and flowers have representative places on the Chrismon Tree. The rose represents Mary, the mother of Jesus; the lily, immortality; the daisy, the innocence of the Holy Child; the palm branch, a sign of triumphant rejoicing; holly, the symbol of Christ’s suffering; and the olive branch, peace, harmony and healing.

“Animals are often found on Chrismon trees,” Murphy said. “The butterfly represents new life, eternity and the Resurrection. The dove represents innocence and purity and the Holy Spirit.”

Two farm animals, the rooster and the donkey, are sometimes found on Chrismon Trees. The rooster is a symbol of steadfastness and faith and the donkey represents the Holy Family’s journey to Bethlehem and Jesus’ ride into Jerusalem on Palm Sunday.

“The lamb symbolizes Jesus and his sacrifice and the fish designates people as being believers in Jesus,” Murphy said.

Other Chrismon Tree symbols include flames, which represent the Holy Spirit coming down. The harp is representative of music in praise to God. Angels represent the messengers of God and the shepherd’s staff represents the shepherds in the field who heard the angels tell of the birth of Jesus.

“And, God and Jesus are often referred to as shepherds,” Murphy said. “Chrismon trees are most often found in churches but many of the Chrismon symbols are also found on family Christmas trees. Knowing the symbols and what they represent are ways to put Christ in Christmas.”