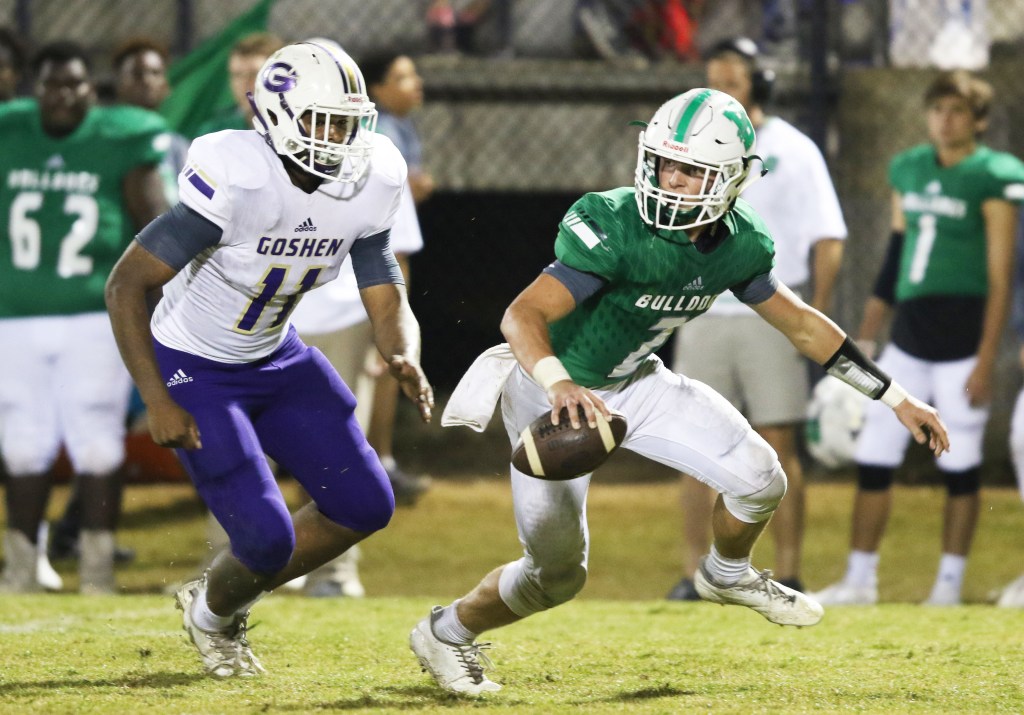 Wednesday will be the first day of the Early Signing Period for NCAA College Football, and Goshen’s Devin Bell will sign his name that morning to a letter of intent to play at Western Kentucky.

While the first week of February generally is when all high school student-athletes are allowed to sign, the NCAA is now offering an Early Signing Period in December.

At 6-5, 235, Bell was a formidable force on defense, and considering he did not play varsity football until his junior year, and that he has battled tonsillitis issues for years, his projection as a Division I pass rusher had several coaches in the Southeast drooling.

“His focus was on basketball, and he played a little bit of football in junior varsity, but just did not think football was something he wanted to do,” said Goshen head football coach Bart Snyder. “He came to us his 10th grade year and said he was ready to play some football. He came out that spring, then played during the fall of his junior year. He is just a great athlete with a lot of potential. He’s an extremely hard worker that loves the weight room. To me he is still young at the game of football, and he is going to be extremely good at it.”

While Bell loved basketball more than football years ago, he also struggled with tonsillitis, and with surgery slated for this spring, he expects to put on the size and weight.

“Since my 10th grade year, I’ve had a case of tonsillitis, and even now I have to limit what I eat because it hurts my throat,” said Bell. “I have been on antibiotics, so I have not been able to get as big as I can be. I am getting my tonsils taken out in March, so once I have that surgery I know I will get bigger and stronger and better.”

Although only playing two seasons for the Eagles, Bell caught the eye and received attention and some scholarship offers not only from Western Kentucky, but also Purdue, Tulane, Louisville, Eastern Kentucky, Union, Southern Miss and Florida International.

Bell is happy to sign this Wednesday and get that process behind him.

“It’s a good thing because I can put my focus on school and enjoy the rest of my senior year, and not have to worry about who I am going to sign with and who wants me.” Said Bell. “I can get that out of the way.”

Bell played tight end, defensive end and outside linebacker at Goshen, but with his 4.68 speed in the 40, Western Kentucky of Conference USA wants him at defensive end. Belli is fine with that, and happy with his choice of college.

Coach Snyder said Bell, who registered 61 tackles and 14 sacks as a senior, was a key part of the success of the Goshen defense, and those skills will carry over to the Division I level.

“Without a doubt, with his athleticism, once he has that surgery done, he is going to feel a lot better, and I just really believe he will be able to work even harder and do the things it is going to take for him to be better,” said Snyder.

“For us this season he was able on third down, and every down, to put pressure on the other team. His speed and strength would allow opposing teams to account for him and double team him, sometimes even triple team him to make sure he was not in their backfield. He was just a big factor in what we did.”