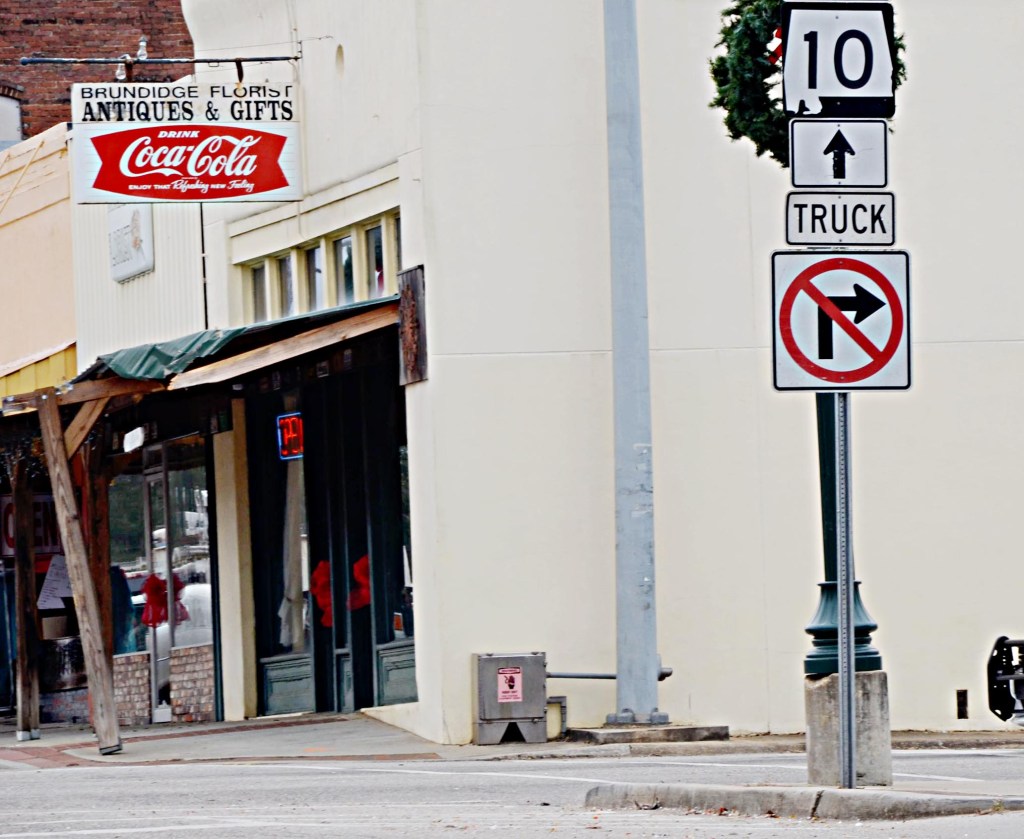 An 18-wheeler took an illegal right turn off North Main Street in Brundidge onto S.A. Graham Blvd. Thursday night and damaged the pole that supported the city’s classic Christmas lights at that corner.

“The driver hit the pole and attempted to back up but couldn’t,” Davenport said. “The ‘no right turn’ sign is visible. The driver made an illegal turn and a citation was written.”

The chief acknowledged that right turns onto Main Street are difficult to make.

Just recently, an 18-wheeler turned right off S.A. Graham Blvd. onto South Main Street and hit and damaged the awning on Brundidge Florist and also the florist’s corner support pole.

Jamie Bullock, Brundidge Florist owner, said that was at least the sixth time a truck has failed to make the turn and damaged the building.

However, there is no signage on S.A. Graham Blvd. that prohibits right turns onto Main Street.

Davenport said it is his understanding that the city has been in contact with the state highway department in regard to the problems caused by 18-wheelers turning right onto Main Street from S.A. Graham Blvd.

“There’s just not enough room for those big trucks to make those turns off of and onto S.A. Graham,” Davenport said.

Council Member Betty Baxter, District 1, said if truck drivers would pay attention and heed the no right turn sign, the problem would be alleviated.

“If the driver had paid attention to the sign, he wouldn’t have hit the pole,” Baxter said. “Mayor Boyd is checking into getting a sign on S.A. Graham to stop right turns off that street onto Main Street.”

Council Member Margaret Ross, District 3, said trucks are tearing up the town and something needs to be done to reduce the number of 18-wheelers that are using the downtown area like it’s the by-pass.

“Trucks are leaving Hardee’s and coming into town rather than getting on Highway 231,” she said. “I don’t understand why they would do that. We have got to do something about this problem.”

Mayor Isabell Boyd and other council members could not be reached.