NUMBER ONE FAN: Tim Magee is all in for Troy 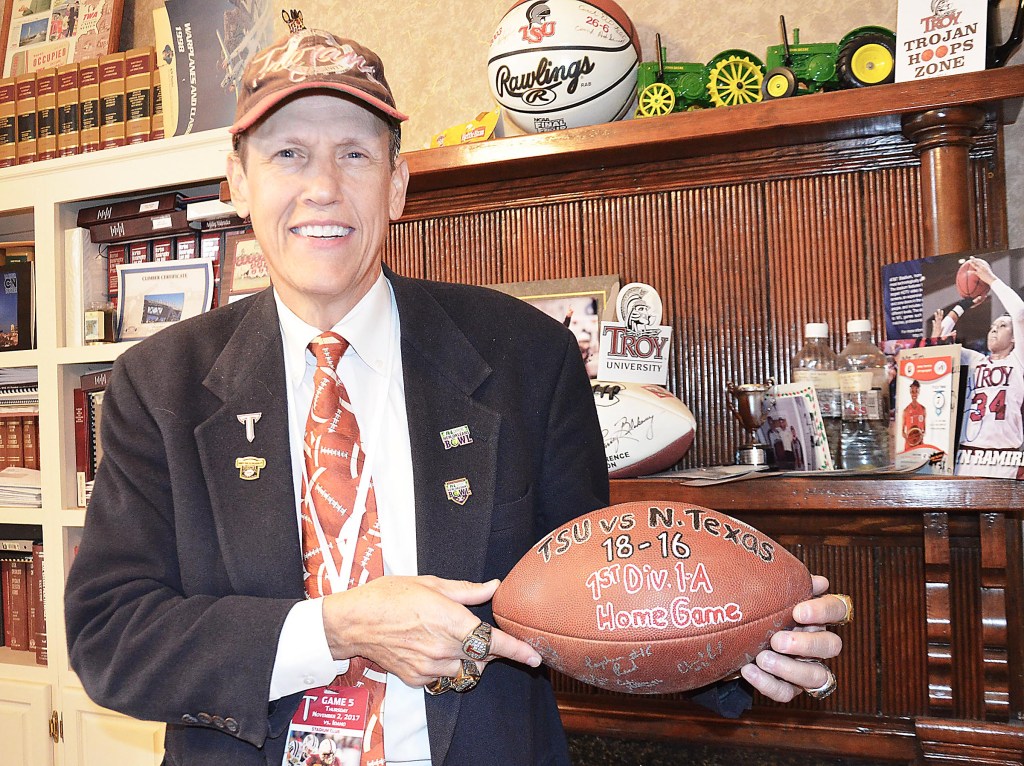 Tim Magee and Troy University football go together like hotdogs and fries or beer and pretzels or any other gridiron combination that comes to mind.

Blakeney ribbed Magee that he spent a small fortune following Troy University football. “And he was probably right but it’s been worth every penny I’ve spent,” Magee said.
The Troy attorney has not put the pencil and paper to what he has spent following the Trojans just since September 1, 2001.

“Don’t want to do it,” Magee said as he adjusted the well-worn Trojan baseball cap that he just might be a little superstitious about. “Maybe it’s a hundred thousand dollars, maybe more, maybe less but it just doesn’t matter. When the Trojans are playing and if I’m kicking, I’m going to be there.”

Magee is a die-hard Trojan fan. Wild horses couldn’t keep him away for the football games but die-hard Trojan fans aren’t hard to find. There are plenty of them around and for good reason. Troy football has brought a lot of recognition to the local university and to the city. The Trojans have been bowling and they’ve brought home conference championships and national championships. And, Magee has celebrated every win and lamented every loss up to 219 and counting.

“When I ‘suit up’ Saturday for the New Orleans Bowl, that will be the 220th game I have seen the Trojans play,” Magee said, with a boyish smile spreading across his face. “What a ride!”

Magee has missed a few Trojan football games but only a few.

And, what is a bit odd about Magee’s devotion to the Troy University Trojans is that his roots are not in Troy, not even in Alabama.

He grew up in America’s Breadbasket and his Saturdays were spent in the grain fields, not in a football stadium.

Magee was introduced to the Troy football back in Iowa around 1972 or 1973.

“Troy was the Red Wave back then but I never saw the Red Wave play,” he said. “I heard about them through friends. I started school at Troy State in 1976 and the Trojans have always been my team, my loyalty is to them, no divided loyalty here.

At one time, Magee had an attendance string of 137 consecutive Trojan games that began with the Trojans’ first Division I game in Lincoln, Nebraska. But, there were games before and games after and each one is engrained in Magee’s mind.

“All games are big and the big wins stay with me but the tough losses really stick with me and they hurt,” he said. “I was in McAllen, Texas when the Trojans won the 1984 Division II National Championship and that’s one of my great memories.”

And, had it not been for Trojan fan Charlie Nonnenmann, Magee would still be lamenting missing that Trojan highlight.

Magee was just out of law school and his wallet was flat.

“Charlie offered to loan me $290 to catch the chartered flight to the game,” Magee said. “I took the offer and paid him back $25 or $50 at a time when I got it. Charlie’s a great friend and he’s one of the many friends I’ve made through Trojan football.”

Having been in the stands for 219 Trojan football games, Magee has great memories of exciting last second victories and agonizing and even embarrassing loses.

But oddly enough, the Trojans 70-7 loss to the University of Montana Grizzlies in Missoula, Montana does not stick in Magee’s craw, as the saying goes.

“We had traveled more than 2,000 miles to that game and it was bone cold,” Magee said. “But it was one of those places where the collateral experience outweighed the embarrassment of the loss.

Magee and Joe Boutwell experienced the exhilaration of a mountain snowboarding and then a stillness so quiet that they could hear the snow falling.

“Each game, each place offered me experiences that I would never have had otherwise,” Magee said. “I’ve been to 26 states, just for college football games. I’ve been to 25 post-season games. I’ve made many friendships and had a chance to see and do collateral things like going to ice hockey games, Major League Baseball games and NLF games. I’ve visited 100 sporting venues and visited college campuses all across the country and, there’s no place like Troy University.

“I’ve followed the Troy Trojans wherever they have gone and I’ve never been anything but proud. My loyalty is to Troy. It’s my university and the Trojans are my team. Wherever I go, I say ‘Go, Troy’ and I say it with pride.”