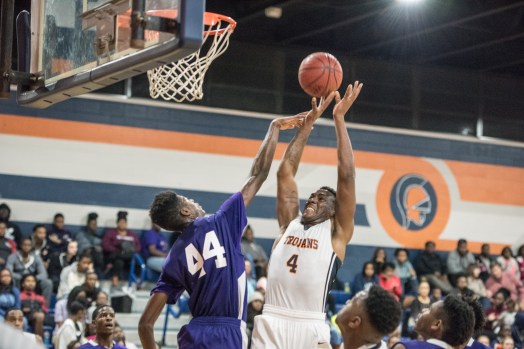 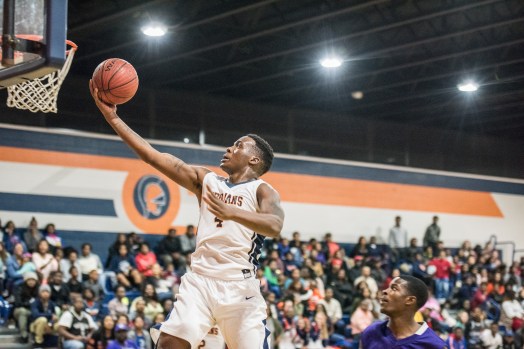 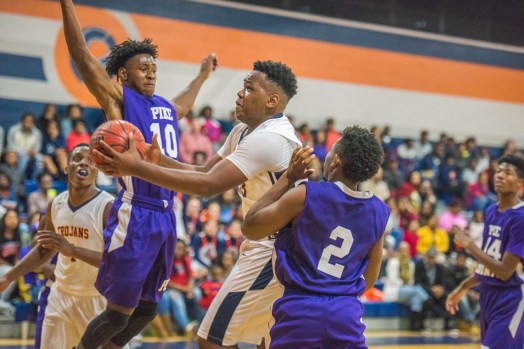 The Charles Henderson Trojans came out on top in a thrilling 62-60 overtime finish against cross-county rivals Pike County High School on Friday.

Charles Henderson took an early lead with two quick buckets to open the game but Pike County quickly opened up a 9-0 run that was highlighted by a put-back dunk by Andres Burney.

Down 9-4, Trojan Kelshun Campbell scored four points to help the Trojans avoid falling too far behind. By the end of the first quarter, Pike County held a slim 13-12 lead.

A lid was placed over the basket in the second quarter as both teams struggled from the field, combining for just six made field goals in the period.

Pike County dominated the offensive glass and forced a multitude of turnovers but failed to convert on the majority of its extra opportunities. Trojan center Laertis Brantley gave CHHS a 15-14 lead early in the second quarter but a Bulldog three-pointer from Elisha Green quickly erased it.

Later in the quarter, with the Bulldogs up 20-19, Pike County’s Jaidyn Wilson hit a layup with a foul and knocked down the free throw to finish the three-point play. That was followed by a breakaway layup by Kevon Harris just before the half ended to give the Bulldogs their largest lead of the game, 25-19.

The third period belonged to the Trojans. CHHS erupted on a 16-2 run to take a 35-27 lead. Trojan guard Jalen Tuck hit two three-pointers and a free throw in the scoring burst. A bulldog basket from Burney and a three-point play from Wilson stymied the run before the quarter ended.

With CHHS holding a 38-34 lead at the start of the final quarter, both teams began trading baskets. With just under five minutes left, Burney followed an offensive rebound with a put-back layup to pull the Bulldogs to within two.

A pair of free throws by Lampley and one from Xavier Newson capped a 7-0 run that gave Pike County a 45-44 lead. CHHS had an answer, however, in the form of back to back three-pointers from Tuck and Dequavian Toney to put the Trojans up 50-47 with three minutes remaining.

The momentum then swung back in Pike County’s favor as the Bulldogs rattled off a 5-0 run and took a 52-50 lead with 44 seconds left in regulation.

Pike County had a chance to extend its lead at the free throw line but couldn’t convert the front end of a one-and-one. On the ensuing Trojan possession, Tuck drove inside and hit a layup with the foul with seven seconds left. He then hit the free throw and the Trojans held a 53-52 advantage.

After a Pike County timeout, Lampley quickly carved through the defense and was fouled on his way up, earning a chance to give his team the win. Lampley hit the first shot to tie the game but was off on the second, sending the game to overtime tied at 53.

The teams traded sloppy possessions throughout the extra period. Tuck hit an inside shot and added a pair of free throws and Elisha Green hit a three to set the stage for the final minute of play.

With CHHS up 59-57 with just 13 seconds to play in the game, Tuck hit one of two free throws to give the Trojans a three-point edge. Coming out of the timeout, Pike County’s long three-point attempt was off the mark.

A few more free throws from Tuck iced the game while the Bulldogs nailed a last second three to cut the final score to 62-60.

Tuck had a game-high 27 points for the Trojans while Lampley led the Bulldogs with 17.

CHHS will return to action following the winter break with a tournament in Destin. Pike County will play next at Wicksburg on January 12th.