OUT IN STYLE: Hatten celebrates years as a mail carrier 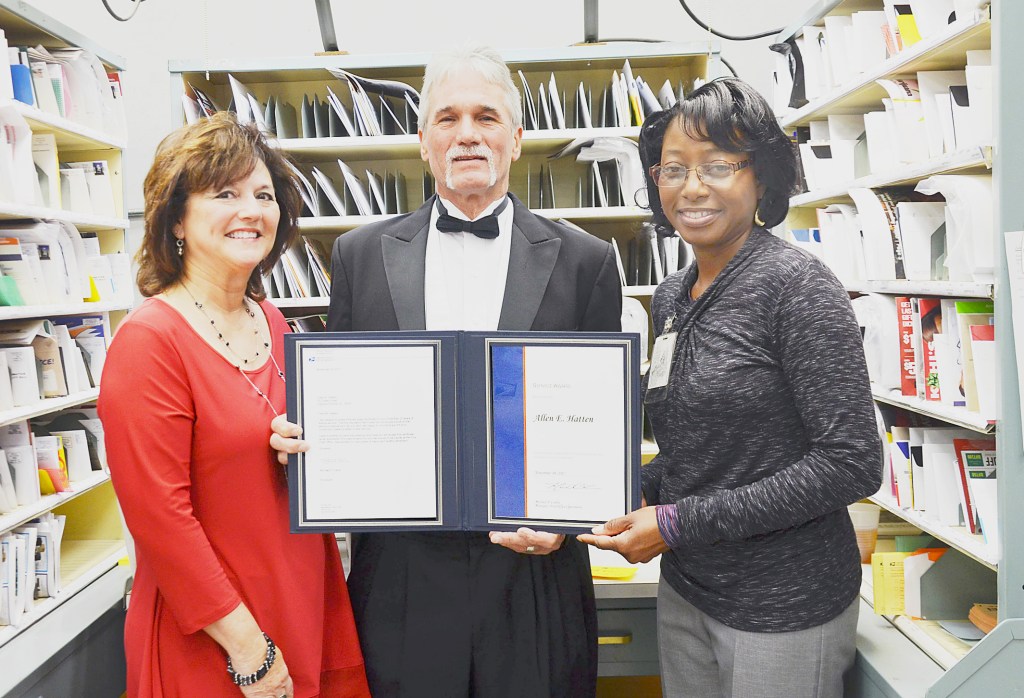 Allen E. Hatten was honored by his co-workers at the Troy Post Office Tuesday morning. Hatten retired after 36 years with the USPS. He fulfilled his desire to wear a tux on his last day as a rural mail carrier. His is pictured with his wife, Teresa, left, and Linda Smith, office supervisor.

Allen E. Hatten is not in the habit of going around wearing a tuxedo all willy nilly.

And, perhaps not many rural mail carriers don a tuxedo for their retirement party from the USPS. But, for Hatten it was the appropriate attire.

He had planned to wear a tux on his last mail route and, if his mail car had not “clunked out” on him, that’s exactly what he would have done.

“I was going to work another year but, I had to furnish my own vehicle and gas and keep the car up, so when I started to have car troubles, I decided not to buy another car, just go ahead and retire.”

On Tuesday, Allen’s retirement was honored by his co-workers at the Troy Post Offfice. He stood proud and tall at that junction of his life in a traditional tuxedo with his wife, Teresa, at his side.

“He cleans up good,” Teresa Hatten said with a teasing smile.

If there were any reservations about retirement, Hatten hid them behind a schoolboy smile.

“I’m looking forward to doing things on the spur of the moment,” he said. “If Teresa and I want to get up one morning and ride to the mountains or go to the beach for seafood, we can do that. If I want to spend the day spoiling the grandchildren, I can do that. This next part of my life will be another adventure.”

Working for the USPS has been a 36-year adventure for Hatten, with 22 of those years fulltime. Over those years, Hatten owned 22 cars, replaced eight transmissions and three motors, had 22 full brake jobs and fixed 367 flats.

“Two deer have hit me and I’ve gotten 92 wasp stings,” he said. “But, I’ve only gotten stuck twice. For rural mail carriers, every day is an adventure. You never know what each day will bring.”

Over the years, Hatten has gotten longer and better paying routes.

“My first routes were about 80 miles but during the last five years, my route was 128 miles and five days a week,” he said. “A lot of that time, I was just riding but at every stop I had an opportunity to speak to the friends I made on the route.”

Often, the residents would be waiting at or around the mailbox to get any news that Hatten could relay.

“Sometimes, they might need a little help and I’d take a minute to lend a hand,” he said. “One day, I pulled up to the mailbox and saw this dear, sweet lady out in the hot sun, slumped over in her wheelchair. I jumped out and ran to her, praying that she wasn’t dead. She looked up at me and said, ‘Will you help me?’ She had been out there in the sun for three hours.

“Another day, I pulled up and saw her waving for help. This time, she was just stuck.”

“That was the most somber day,” he said. “People met me at every mailbox. It was like a dark cloud was hanging over us but still something was pulling us together. I’ll never forget that day.”

Hatten said he will miss the many friendly faces that met him at the mailboxes along his Goshen route. He will miss the rides down the bumpy roads that he knows like the back of his hand. He will miss the solitude that sometimes affords a rural mail carrier and the friendships that he has forged with his co-workers.

“My postal family is made up of good people and I will miss them all,” he said. “I thank them and all of those on my routes.”

Hatten walked away from 36 years, with the USPS, not looking back but looking forward to hopping on his motorcycle with his wife and riding west to Yellowstone and places unknown. “High-ho, Harley!”