Nutcrackers on display at JCA 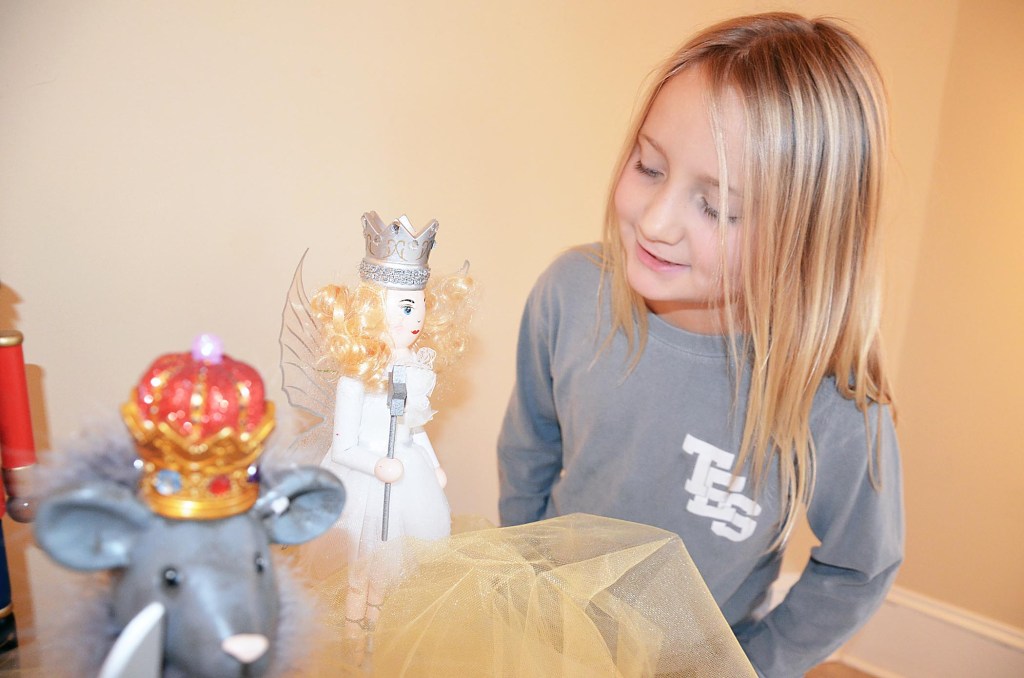 Josephine Dawson was among the first young people to view the Nutcracker display at the Johnson Center for the Arts. The Nutcrackers are from the collection of Claire Murphy and include nutcrackers handmade from flower pots as well as ones that are machine produced.

As a part of it Christmas Tree Extravaganza each year, the Johnson Center for the Arts displays a collection of Nutcrackers during the holiday season.

Wiley White, JCA exhibition coordinator, said Nutcrackers have become a part of the Christmas celebration for many families and children especially enjoy the story of the nutcrackers.

“The Nutcracker and the Mouse King” is the story in which Clara’s favorite Christmas toy, the Nutcracker, comes alive and defeats the evil Mouse King in a fierce battle.

Then the Nutcracker takes Marie away to a magical kingdom where dolls live.

“The story of the Nutcracker begins on Christmas Eve so it is a good story for young students to have read or told to them when they come to see the Christmas trees that are decorated with ornaments made by school children,” White said. “Some of the them are familiar with story but many are not. They really seem to enjoy the story and are interested in and curious about the nutcrackers on display.

For some of those who are hearing about the Nutcracker for the first time, it many be the beginning of a lifelong interest or even fascination with the wood characters. It happened that way with Claire Murphy, who had offered a part of her collection for display at the JCA during the 2017 Christmas season.

“My interest goes back to when I was n first grade and wanted to take dancing,” Murphy said. “My dad was a minister so, in a way, I ran away from home to go with a friend to dance class.”

The Sugar Plum Fairy peaked young Murphy’s interest in the story and that interest has continue through the years.

The late Susan Berry encouraged Murphy’s interest in nutcrackers and Clara later became the storyteller for school groups that visit the JCA during Christmastime.

Murphy’s first nutcrackers were Clara, Drosselmeier and the mouse are on display this year and will be front and center when Murphy or others share the story of The Nutcracker.

“I like to tell the story rather than read it,” Murphy said. “I like to look the kids in their eyes and I like to handle the nutcrackers. The visual and the interaction adds to the story.

Two children who were from the Ukraine lived down the street from Murphy.

“The didn’t get to do crafts when they were growing up so I would do craft with them. One of our projects was making nutcrackers out of flower pots. They are not as interesting as the store bought ones, but they were fun to make and they are interesting in their own way.”