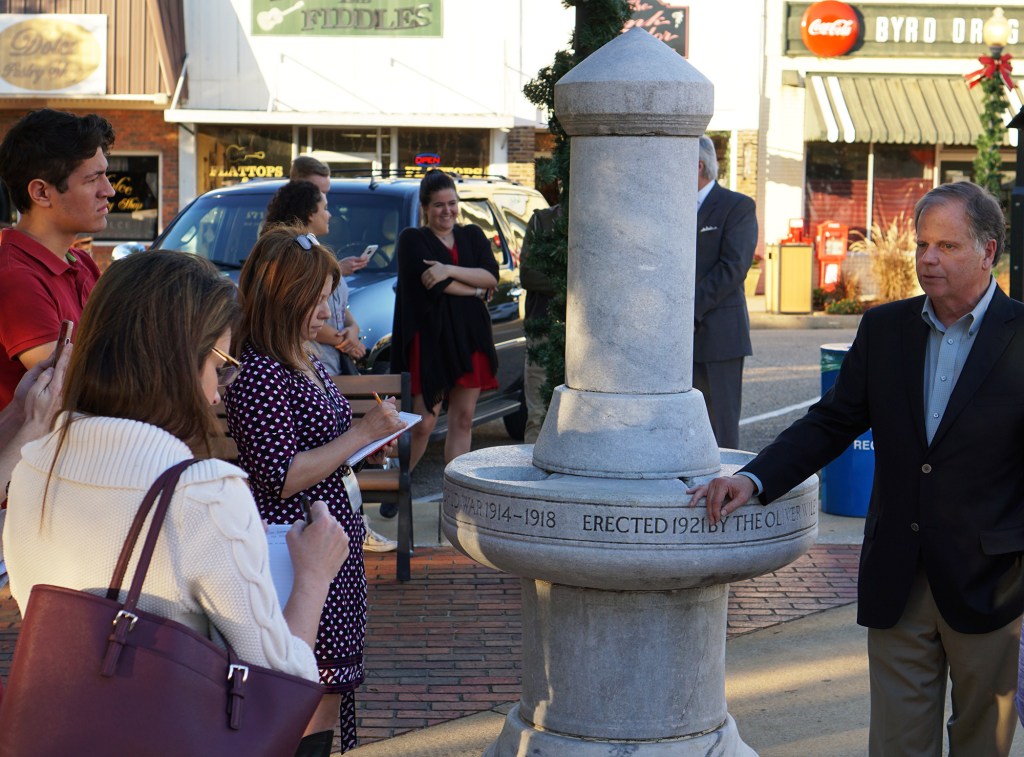 U.S. Senate Democratic candidate Doug Jones took time on the downtown square in Troy Friday to meet with voters and the media ahead of the Dec. 12 special election between Jones and Republican candidate Roy Moore for the seat. Above, Jones speaks on allegations that Moore engaged in inappropriate sexual behavior and about the issues important to him.

It was the first Democratic Senate victory in a quarter-century in Alabama, one of the reddest of red states, and proved anew that party loyalty is anything but sure in the age of Trump.

It was a tight race in Pike County as well, with Moore barely squeaking out a majority of votes, pulling in 50.41 percent. Jones garnered 48.41 percent of the vote while just over 1 percent of votes were write-ins.

“When I saw voter turnout was so heavy this morning, I really expected the tally to be more for Jones, to be honest,” Horn said, “He did a really good job campaigning in the last week whereas I didn’t see Judge Moore in the last week or so. I don’t think Moore voters were as energized.”

Local attorney Joel Williams, a Democrat, said the victory serves as a reminder that Democrats can win races in Alabama.

“It shows that the Democratic Party is still viable,” Williams said. “It’s a constant struggle here; I think Democrats have better policies but don’t do a good job delivering the message. We allow Republicans to set the message.

“But I ran as a Democrat for the legislature and carried Pike County by 700 votes. Democrats can carry Pike County – we’ve done it; and even in a race where Republicans were so galvanized to send their candidate, Pike County was still a coin toss.”

Now that Jones has been elected, Horn encouraged all Alabama citizens to get behind him and support him in his new role. Horn also outlined what she thinks Moore should do next.

“I think what Roy Moore should do now is if the allegations against him are false, he should pursue every allegation against him,” Horn said. “And if those allegations are true, he should stand up and say they’re true… He needs to settle those things one way or the other and move on with his life. He owes every person who campaigned and voted for him, he owes that to them.”

Pike County saw a voter turnout of 37.59 percent, nearly three times the percentage of voters to show up for the Republican primary runoff between Moore and Luther Strange in September.

“It was a lot more brisk at the polls today than it was back in August and September,” said Probate Judge Wes Allen. “I thank all the poll workers for their public service today.”