JCA fundraiser ‘Christmas at the center’ one of the biggest ever 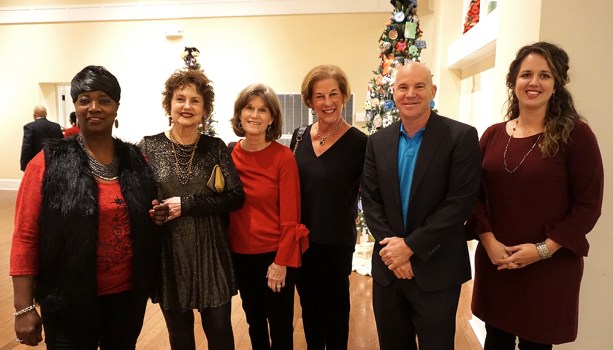 “Christmas at the Center” at The Studio in Troy Friday night was a tremendous success. So much so, that the annual fundraiser for the Johnson Center for the Arts might have been the best of them all, said Wiley White, JCA exhibition coordinator.

“The Johnson Center for the Arts is a non-profit organization,” White said. “‘Christmas at the Center’ is our largest fundraiser and it goes a long way in ensuring that we are able to continue to bring quality exhibitions and other arts events to the Johnson Center.”

White expressed appreciation to all of those who made the 2017 JCA fundraiser a success.

“‘Christmas at the Center’ was catered by Syndey’s Catering Service in Luverne and the food was a fabulous way to start the evening,” she said. “And, the entertainment was outstanding with Christmas music as well as other popular selections.

The silent auction was a highlight of “Christmas at the Center” with donations that should exceed the funds raised in 2016.

“The items donated to the silent auction were top quality,” White said. “The items included an Art Party donated by Day Barnes, a metal sculpture donated by Chris Beck, weekends at The Emporium and The Chapman House donated by Kelly Sanders, two class creations by Charles and David Adams of Adams Glass Studio, jewelry by Mary Holman Johnson and ‘Of Goats & Governors ‘ by author Steve Flowers.”

The exhibits at the Johnson Center include the Christmas Tree Extravaganza, the Juried Art Show and the Colley Complex Potters.

The JCA hours are from 10 a.m. until 5 p.m. Wednesday through Friday and until 3 p.m. on Saturday. The art center will be closed on the Fridays and Saturdays before Christmas and New Year’s Day.