THE ROLLING STORE: Banks Buy-Rite owner brings back a piece of history 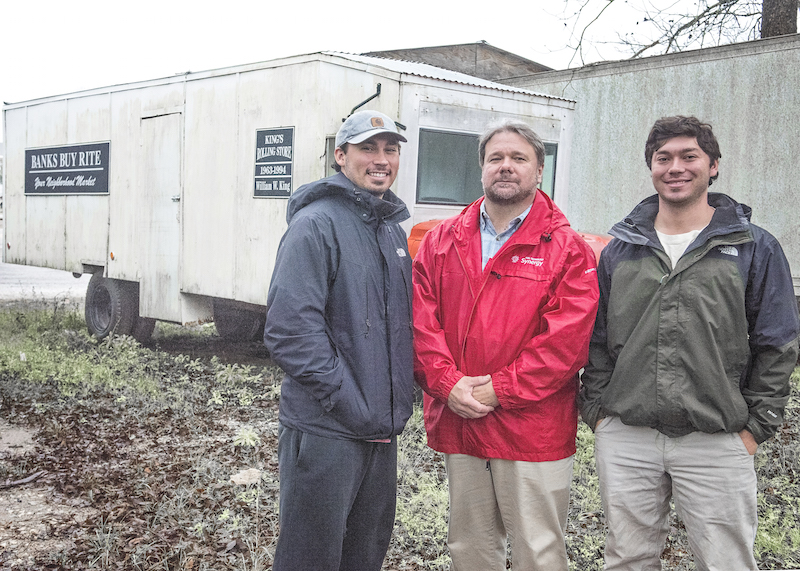 Tyler, Al and John Randall Roton stand in front of their old rolling store, which serves as a way to advertise their old country store in Banks.

Al Roton was driving down a long stretch of U.S. Highway 231. He could have been tapping the steering wheel in time to music on the radio. He had a good job with a meat packing company. His financial future was secure. Although he had no complaints about his job, something in his life was missing

As soon as Roton said “amen,” the phone rang and his life took a detour. He has never looked back.

“I had a good job but I didn’t feel like it was my calling,” Roton said. “I had always wanted to go into business for myself — to own a general store.”

The phone call in July 2002 was from Chester Garrett. He owned and operated the Banks Buy-Rite and he asked Roton if he would like to buy it.

“I didn’t have to think twice,” Roton said.

Banks is located in rural Pike County. The population tops around 175 and the town’s claim to fame is that it’s where Hank Williams met a local girl, Audrey Sheppard, when he was playing for a medicine show. They married and Banks has that bit of local lore to its credit.

“You could say Banks is a sleepy little town but it didn’t use to be,” Roton said. “It had several stores and a good bit of activity. Now, the Buy-Rite is the hub of activity in Banks.”

In other places, the Banks Buy-Rite might be considered a convenience store. In Banks, it’s a general store or, some say, a country store.

There’s no pop-bellied stove with pot-bellied men gathered around but it has that kind of feel.

And, it has a deli with some of the best chicken fingers and tater logs money can buy and homemade camp stew that sells out so fast that even money can’t buy it. Biscuits baking in the morning bring in people by the droves.

Tables are nudged next to the deli and are crowded during breakfast and lunch hours with farmers, loggers, hunters in season, stay-at-home moms and anybody else with a taste for good food and stimulating conversation or just small talk.

But the Banks Buy-Rite on state highway 29 is more than a general store. Some might say it’s a museum but that sounds too stuffy. The Buy-Rite is a storehouse of local lore. Antiques, old-tiques and treasured junk have prominent places around the store – on the walls, on the shelves, on the floor and, if you’re not watching your toes could get run over by a youngster cruising the aisles on an antique John Deere pedal tractor.

“A lot this memorabilia is family stuff, some of it we bought and some of it was donated to us,’ Roton said of the antique displays that occupy prominent places in the Buy-Rite. “We wanted the people in the community to feel a part of the store,” Roton said. “The Buy-Rite is all about community. We spend seven days a week here and we want people in the community to feel as at-home at the Buy-Rite as we do.”
Roton is passionate about the past as it applies to rural Pike County in general and, specifically to the Banks area.

His son, John Randall, 24, might be even more of a Banks-buff.

John Randall enjoys sitting around listening to the stories and tales that are told around the tables at the Buy-Rite.

“Usually, people talk farming, weather, sports and politics and then they get off on stories about things that happened back years ago –things they know or have heard. I like listen to all that,” John Randall said.

Those stories peak the interest of the young folklorist and inspire him to dig deeper into the history of the area.

One area of special interest to father and son has been the rolling stores that once serviced rural routes, taking supplies to those who were unable to go into town to shop.

Roton said the rolling stores carried everything from canned goods to candy and kerosene.

“They carried all the staples and other necessities like nails, tools, thread, whatever might be needed and some things wanted,” Roton said. “There would be an icebox for meats and ice cream. People would sometimes barter for items they needed. They would swap eggs, vegetables, and even live chickens. There was a chicken coop attached to the underside of the rolling store to put the live chickens in until the route was run.”

Roton said rolling stores were a part of the romance of the era. So, he and his wife, Sheila, and sons, John Randall and Tyler, decided a rolling store was the order of the day for the Banks Buy-Rite.

“We thought a rolling store would be a good way to advertise the Buy-Rite and, too, we just wanted one,” Rolling store. “Every general store needs a rolling store.”
When the opportunity presented itself, the Rotons didn’t hesitate.

Roton said the rolling store ran its last route around 1994 so it needs a little work and some fixing up. Just what role the rolling will store will be given, Roton said he’s not sure.

“It will be parked at the Buy-Rite and we’ll drive it in parades, not so much to advertise the store but for the nostalgia of it,” he said.” Some folks will remember the rolling store and many folks have never seen one. The rolling store is a part of the history of the rural South and we want to keep that part of history alive.”

And, it’s not out of the realm of possibilities that Roton and Sons will stock the rolling store and run a few routes every now and then. Just for old times sake.

The Rotons want to keep history alive. And, when a customer rounds an aisle in they Bank Buy-Rite, they just might come face-to-face with a photograph or an artifact that peaks their interest.

And, one of the Rotons will step around the corner with a story to share.