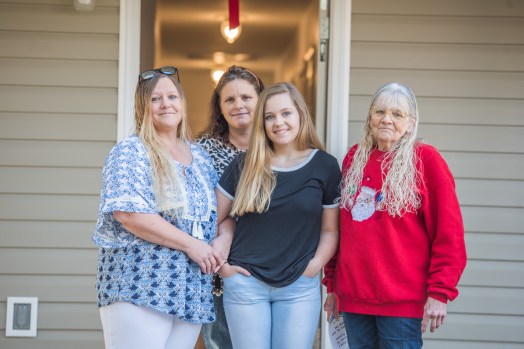 Today, Ashley Barron lives in a two-bedroom home with her two daughters and physically handicapped mother.

The home was formerly Barron’s grandparents. The windows are busted out, the foundation is crumbling and two electric heaters heat the house – when the electricity isn’t having problems.

“We’ve made it work,” Barron said. “We didn’t have another choice.”

That will change Sunday when Barron and her family are handed over the keys to their new home from the Troy-Pike Habitat for Humanity.

Barron had been out of work, depressed and in debilitating pain from fibromyalgia for three years.

“I woke up one morning in so much pain I couldn’t feel my feet on the floor,” Barron said. “I got depressed and I felt like I had given up, and that’s not who I am.”

Eventually, her pastor suggested she apply for a home from Habitat for Humanity. Barron did fill out an application, but without a job, she was denied.

Then one day she said she had had enough of staying at home.

Habitat told Barron to reapply for the home, and this time she was accepted.

So in March, she and volunteers from around the community began building a new home for the family.

“It never felt like I was working on my own house until the last few months,” Barron said. “You just want to pinch yourself.”

The home is finally finished and ready just in time for the Christmas holidays.

“This is one of the biggest blessings we’ve ever received,” Barron said. “God put the right people in our lives for this and I can never thank Habitat for Humanity enough. God sent us angels.”

Barron said the process is the most emotional moment of her life next to the birth of her two daughters.

See photos from the dedication here.