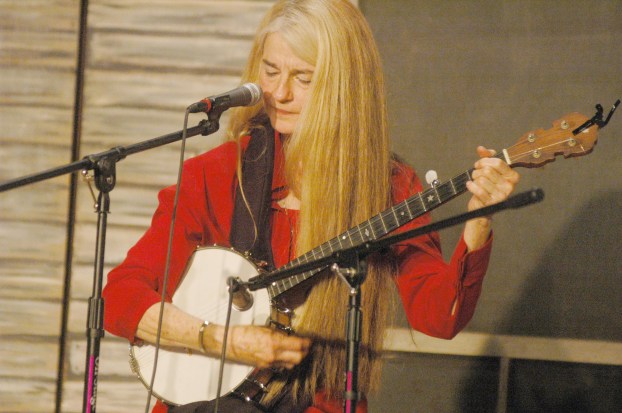 during the 2011 Pike Piddlers Storytelling Festival at the We Piddle Around Theater in Brundidge, Ala., Friday, Jan. 28, 2011. (Messenger Staff Photo/Thomas Graning)

Seventh-generation ballad singer, storyteller and claw-hammer banjo player Sheila Kay Adams from the mountains of Western North Carolina will take the stage at The Emporium in Troy at 6:30 Saturday night. Tickets are $10 and are available at The Messenger and at the door. Seating is limited.

“To have Sheila Kay Adams at The Emporium was an opportunity we could not pass up,” said Mernette Bray, a member of the sponsoring Brundidge Historical Society’s storytelling committee. “Sheila will be in concert at the We Piddle Around Theater Friday night and will play to a sold-out audience. But, since she will be in town through the weekend, we wanted to give others the opportunity to hear her.  The Emporium is a unique and rather rare opportunity to hear Shelia in an intimate setting.

“Sheila is very generous in doing this performance for us. Our hope is for a good gathering of folks who will appreciate her talent and her dedication to mountain tradition.”

Adams’ family came over from the “old country” in the mid-17th century and settled in the Western North Carolina mountain community of Sodom and didn’t come out for nearly 200 years. So, the way the unaccompanied ballads were sung in the 1700s was preserved. Today, Adams is invited back to the United Kingdom to teach the people of England, Scotland and Ireland how their ancestors sang the unaccompanied ballads 200 years ago.

Adams has performed balladry and her signature drop-thumb clawhammer style of banjo across the United States and the United Kingdom. She has earned multiple recognitions including a NEA National Heritage Fellowship, which is the highest award bestowed on traditional artists.

Adams performed and discussed the roots of her musical style in Scottish, Irish, and English ballad traditions at the 2017 Smithsonian Folklife Festival. She was also the keynote speaker at the Festival’s first USCIS Citizenship Ceremony.

She is the author of two award-winning books and presents at folk music festival across the country and at highly acclaimed storyteller festivals including the National Storytelling Festival.

Adams has also recorded several albums of ballads, songs and stories and appeared in the movies “Last of the Mohicans” and “Songcatcher” in which she also served as technical advisor and singing coach.

Troy businesses sell alcohol on Sunday for the first time

People bought alcohol on a Sunday for the first time in Troy after the ordinance allowing the practice took effect... read more