No. 6 Georgia holds the SEC Championship trophy after win over No. 4 Auburn 28-7 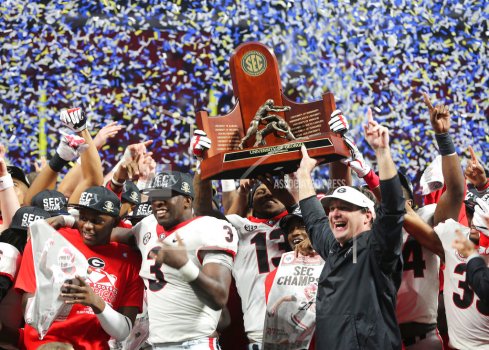 ATLANTA (AP) — Kirby Smart took the customary drenching with an ear-to-ear smile. He bounced up and down on the sideline with as much exuberance as his players. And when the coach waved his visor to the red-and-black faithful, he knew better than anyone how much this meant after a long, long wait.

Rebounding emphatically from a blowout loss at Auburn just three weeks ago, the No. 6 Bulldogs doled out a whipping of their own on Saturday. And what a time for some revenge, with the Southeastern Conference championship and almost surely a trip to the College Football Playoff going to the winner.

Roquan Smith gobbled up two crucial turnovers, freshman Jake Fromm threw a pair of touchdown passes and Georgia cruised to a 28-7 victory over the No. 4 Tigers in an SEC title game that was a total reversal of the last meeting between the teams.

“It’s great to bring it back to Georgia,” said Smart, who played defensive back for the Bulldogs in the 1990s. “The Bulldog Nation is certainly starved.”

Smart needed only two seasons to return his alma mater to national prominence, though he certainly learned a thing or two about what it took to get there in his previous job as Nick Saban’s defensive coordinator at Alabama.

Of course, there’s a bigger prize for the taking.

The Bulldogs haven’t won a national title since 1980, a drought that has only grown more and more irritating to Georgia fans as schools all around them — Alabama, Auburn, Florida, LSU, Tennessee, Clemson, Florida State — finished No. 1 in the years since.

“It’s been an incredible journey,” said Fromm, who took over as the starter when Jacob Eason was injured in the season opener and never relinquished the job. “I never thought it would shake out this way.”

The Tigers rolled into Atlanta as the hottest team in the country after impressive wins over Georgia and then-No. 1 Alabama in its last three games. But the Tigers were stymied by their own mistakes, which also included a blocked field goal, and they had no answer for a Georgia team eager to make up for its embarrassing 40-17 defeat on the Plains .

“They flipped the script on us from the last game,” Auburn coach Gus Malzahn said.

Nick Chubb, Sony Michel and freshman D’Andre Swift provided a much more effective running game , which opened up things for the young quarterback. Fromm completed 16 of 22 passes for 183 yards, including a 2-yard touchdown to Isaac Nauta in the second quarter and a 6-yarder to Terry Godwin with just over 13 minutes remaining that essentially sealed Georgia’s victory.

The Bulldogs, who were No. 6 in the latest CFP standings, should move into the top four after their dominating performance. Auburn was ranked second in the CFP poll, only to have its hopes fade away with a lackluster offensive performance. The Tigers were up held to 259 yards after piling up 488 in their Nov. 11 romp.

Swift, another impressive Georgia freshman, finished it off with a 64-yard touchdown run through a huge hole.He dashed to the end zone without being touched, sending the Georgia fans into a raucous celebration that figured to go on well into the night.

Swift finished with 88 yards, Chubb had 77 and Michel added 45 before he left the game in the third quarter with what is believed to be a minor knee injury. In the last game against the Tigers, Chubb was held to 27 yards and Michel 21 — their lowest outputs of the season.

Auburn started out like it was headed for another big win. Jarrett Stidham capped the opening possession with s 6-yard scoring pass to Nate Craig-Myers, and the Tigers pushed into position to extend their lead early in the second quarter.

That’s when the game suddenly turned.

Stidham dropped back to throw, couldn’t find anyone open and didn’t sense Davin Bellamy coming up behind him. The Georgia linebacker stripped the ball away and Smith fell on it for the Bulldogs at the 16.

Georgia drove the other way for the tying score and tacked on the first of two field goals by Rodrigo Blankenship for a 10-7 lead at the half.

Auburn wasted another scoring opportunity in the third quarter when Daniel Carlson’s 31-yard field-goal attempt was blocked by DaQuan Hawkins-Muckle . Then, trailing 13-7, another turnover on the first play of the fourth quarter finished off the Tigers.

Kerryon Johnson, who played despite an ailing right shoulder, was stripped of the ball and Smith scooped it up again at the Auburn 39 , retaining the spiked, Road Warrior-style vest that Georgia awards to players who take the ball away from the other team, the Dawgs’ version of the turnover chain.

Smith picked up another prize after the game: the MVP award.

Georgia: Smart did a masterful job of motivating the Bulldogs after they were thoroughly outmuscled in the first meeting. “They just physically whipped us up front,” Malzahn said.

Auburn: After being knocked out of the playoff, the Tigers will turn their attention to Malzahn’s future. He’s been mentioned as a possible candidate at Arkansas. “I’m happy at Auburn,” he insisted. “I think the best is yet to come.”

Johnson, whose status wasn’t known until game time, managed just 44 yards on 13 carries. Clearly, he was bothered by his ailing shoulder, but he wasn’t the only one who struggled.

Stidham, who played brilliantly during a five-game winning streak, was held to 16 of 32 for 145 yards by a Georgia defense that brought heavy pressure all game. He was sacked three times.

Georgia: Will likely head to either the Rose Bowl or Sugar Bowl to play in a semifinal playoff game.

Auburn: Could wind up returning to Atlanta on New Year’s Day for the Peach Bowl against Central Florida.