Heartbreaker: Goshen’s magical run comes to an end with loss to Leroy 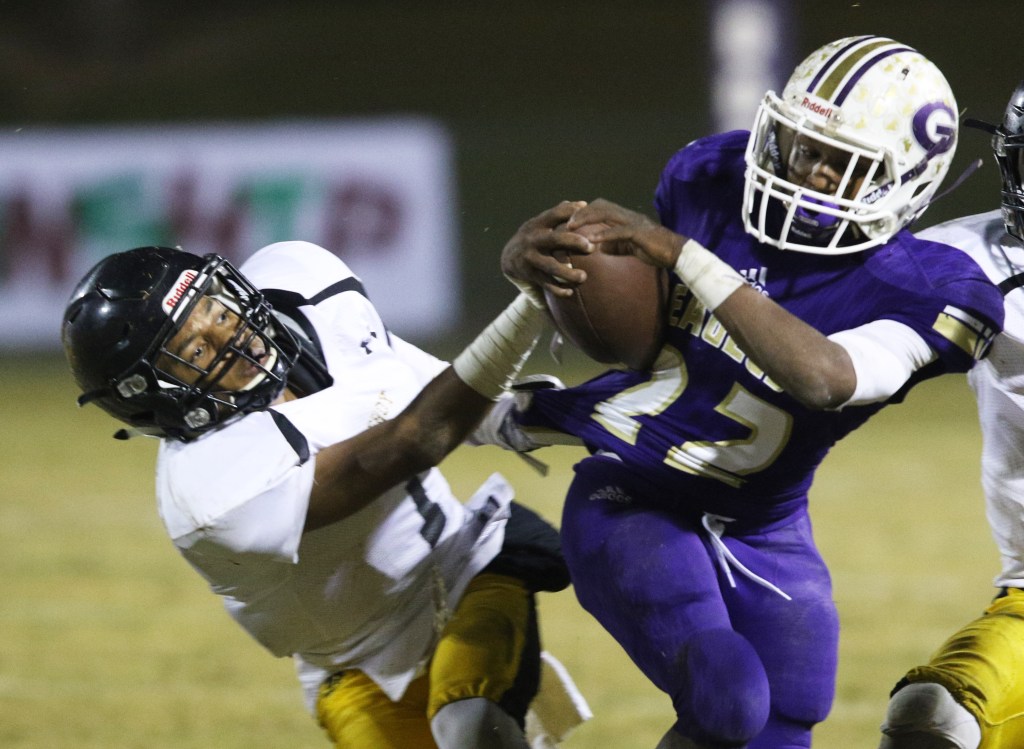 Messenger Photo/Dan Smith Damion Passmore of Goshen (22) breaks a run against Leroy as Jone Peoples pursues. The Eagles fell to the Bears 28-21 in the Class 2A state semifinals on Friday night to bring their season to a close.

With 15 seconds left on the clock, Goshen lined up for a 45-yard field goal to overcome a 22-21 Leroy lead, to claim another remarkable come-from-behind victory in what has been a remarkable season. Jacob Weaver of Leroy, however, broke through the line, blocked the field goal, DeClintae James returned it for a touchdown, and Leroy earned the right to the Class 2A state championship final with a 28-21 victory, Friday night in Goshen.

In a contest played in fog as thick as Conecuh River mud, both teams swapped scores and leads, and what seemed to be a miracle drive at the end quickly turned to heartbreak for the Eagles, head coach Bart Snyder, and the loyal Goshen fanbase.

“We thought that going down there, that we got the ball in perfect position,” said Snyder. “I just don’t know how they got in but they got in and made a great block, and I really think from the angle I was looking that it was a good kick, but they just made a great play, and it would have been heck to have won it that way, because it was a great ballgame. Both teams were deserving. Somebody had to come in second down here, and it just happened to be us.”

Leroy went up 14-7 in the second quarter on a 26-yard scamper by Fikes, and the PAT by James Sullivan was good. Fikes ended the evening with 158 yards rushing and 80 yards in receiving.

Goshen tied the score 14-14 in the third quarter with 5:19 showing when Zack Alford scored from 19 yards out and Hamlin kicked.

Goshen took a 21-14 lead with 7:45 to play in the game as the fog rolled in making visibility near zero. Alford took the ball in on an 8-yard carry, and Hamlin kicked for the Eagles lead.

With 1:29 to play in the game Leroy drove for their go-ahead score, with Taylor running it in from 1-yard out for the touchdown, the Bears went for two points, and Taylor again found the end zone for the conversion and a 22-21 lead.

Goshen took the kickoff and drove to the Leroy 28 with 0:15 to play in the game, where they attempted a field goal, but the attempt was blocked and returned for a touchdown and a 28-21 Leroy victory.

After the game Coach Snyder reflected on what has been a special season for his Eagles.

“The games we played this year, it’s been unreal since Homecoming, I mean, have-to wins,” said Coach Snyder. “We had to beat Pike County to come in first, we had to beat Brantley to come in first, and then when we won the region and got in the playoffs, and to get to the next game, you have to win. That’s a lot of stress to put on a young kid, and when you sit down and talk about the region stuff, I commend what they have done, but when you have a Township of 250, playing against a town of 1,500, and your kids have to travel 20 to 30 minutes to get to our school, it’s a huge disadvantage, but it is the way the cards are dealt and I am very proud of our guys. Being rural makes it tough. We are the last ones standing in that. I am proud of our guys and proud of the fan base. We’ll be back and we’ll be ready for next year.”