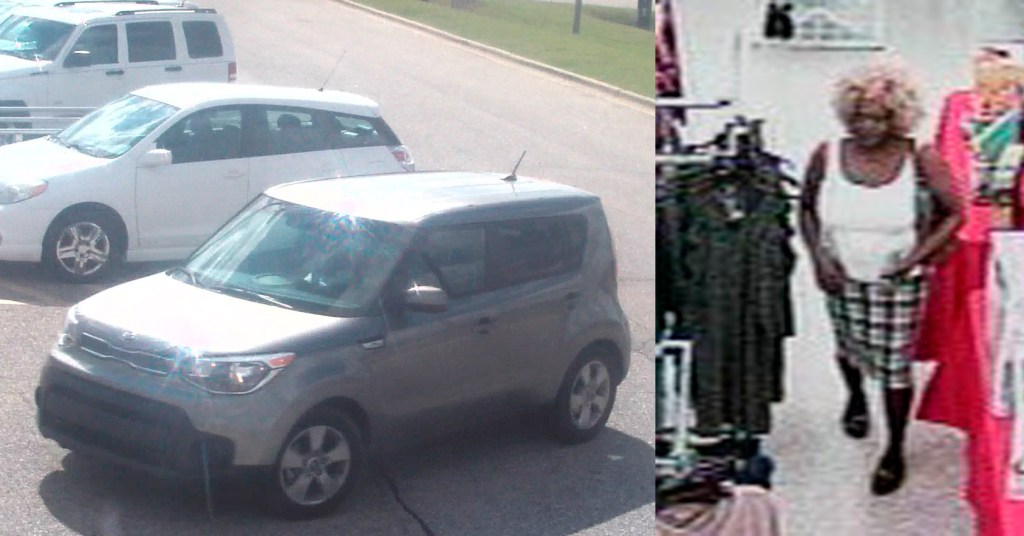 Police are looking for information on a woman (pictured right) who allegedly deceived a 74-year-old woman out of her money. Police say she arrived at the store in a gray Kia Soul (pictured left).

Troy police are asking for the public’s help to identify a woman they say used an elaborate scheme to deceive a 74-year-old woman into giving her money.

“The suspect claimed to have found a purse full of money and offered to split the cash with the victim,” said Troy Police Chief Randall Barr.” Through an elaborate series of events, the victim was convinced to withdraw a large sum of cash from her bank account and give it

Barr did not specify the amount of money that was given under the guise of the scheme, but confirmed it was over $2,500, meaning the suspect would be charged with first-degree theft of property, a Class B felony.

“This is theft by deception, but it falls under that same category,” Barr said. “She’s preying on the elderly is what she’s doing.”

Although the victim did not see another suspect, video surveillance captured the woman exiting from the passenger side of a gray Kia Soul. The driver is not visible in the video, Barr said.

Police are now asking for the public to come forward with information about the woman. She is described as a black female standing at approximately 5’ 6” with a slender or medium build and bushy blonde hair that may have been a wig. She was wearing a white tank top and knee-level plaid pants or a plaid skirt when the exchange took place on November 6.

Anyone with information about who may own the vehicle or about the suspect in this crime is asked to contact the Troy Police Department at 334-566-0500 or on the secret witness line at 334-566-5555. A phone call may also be placed to Central Alabama Crimestoppers at 334-215-STOP. A tip could lead to a cash reward.

Barr is warning citizens to be cautious when approached by people with one of these schemes.

“If it sounds too good to be true, it probably is,” Barr said. “We’d love to be called out and make contact with people doing this and find out what they’re doing.”