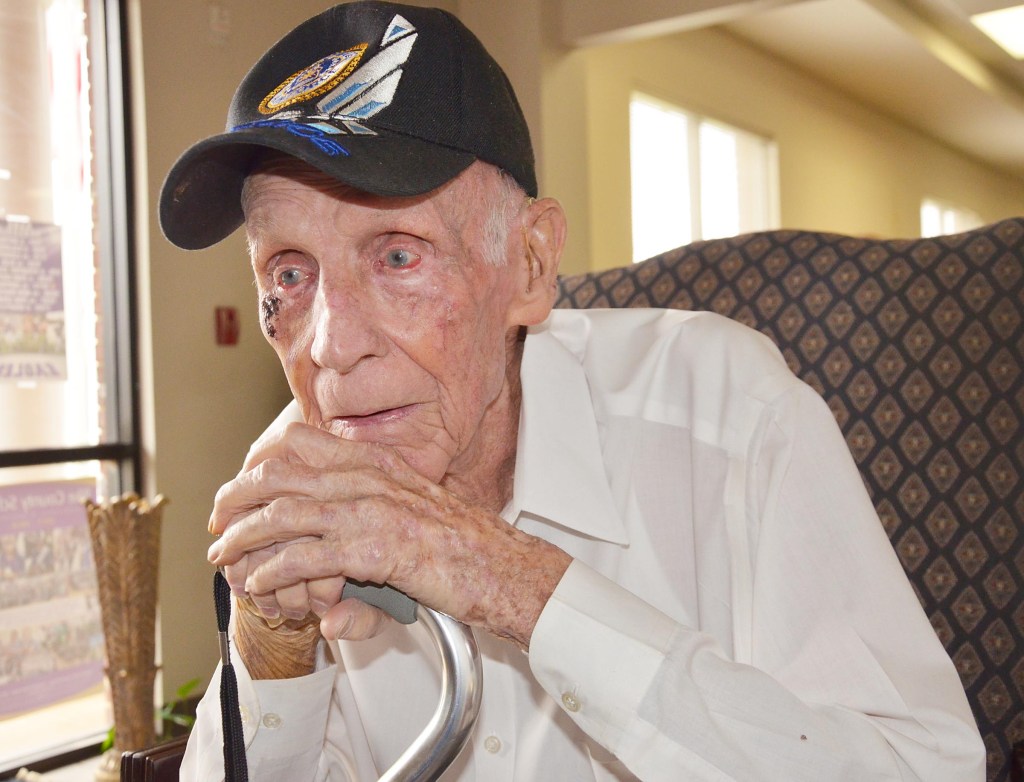 The letterhead read: United States Atlantic Fleet, Flagship of the Commander in Chief. It was dated 25 April 1943 and was directed to James. D. Collins.

“The Commander in Chief, United States Atlantic Fleet, in the name of the President of the United States, awards the Legion of Merit in the Degree of Officer to James D. Collins, Seaman First Class, U.S.N.R.”

The citation was “for service of a high degree of merit while attached to the U.S.S. Charles Carroll during the assault on and occupation of French Morocco from November 8, 1942 to November 11, 1942.”

Collins of Goshen was a member of the crew of a support boat that landed northeast of Ofedala on November 8, 1942. The group that landed at that point was attacked by hostile planes and ground forces and cut off entirely from support. Upon a call for volunteers to man a rubber boat to get help, Collins and J.V. Goleniecki, coxswain, responded. Under fire, they made their escape late that afternoon and succeeded in reaching other U.S. Naval Forces that evening. Their daring escape gave the Attack Force Commander the first information of the force, which was cut off and beleaguered by the enemy.

The courage and resourcefulness displayed by Collins were in keeping wit the highest traditions of Naval service.

Collins sat thoughtfully at Goshen Town Hall as he remembered and pondered why he volunteered to risk his life by manning that rubber boat.

Collins said he was young and crazy enough to be fearless. He remembered the rough ride with cold water slapping him in the face and bullets piercing the air, but fear? He doesn’t remember that.

“If we got through, we could live, maybe. That’s all I was thinking.”

Collins was not one to sit and wait. And, during his early days of enlistment, he did more waiting than he would have liked.

A native of Gibsonville, North Carolina, Collins joined the Navy on December 11, 1941.

Collins laughingly said he joined the Navy because he didn’t want to walk.

After 30 days on the ocean water and eating beans and rice and rice and beans, young Collins decided walking might not be so bad.

His memories of “the War” come in sketches but they always come powerfully.

He was a part of the African Invasion and remembers being shelled in the attempt to reach the beach.

“The breakers were seven to 10 feet and they crashed down on you like a ton of bricks,” he said. “The tank carriers would turn over on their sides. German soldiers were all over the place. Thirty-eight of us got surrounded and we held up in a metal building with no food or water. Then, the Germans found us and took us prisoners. After two days, when I realized nobody was watching, two of us took off and ran like hell.”

Collins said he was running through mine fields and four times was knocked to his knees.

“We got in sight of the water and, where it came from, I don’t know but we found a 12-man life raft that was turned upside down. We rowed all day and all night before we realized we were going the wrong way. We escaped from the Germans but were a long way from our fleet.”
During the Allied Invasion of Sicily, Collins remembers seeing Gen. George Patton with his pearl-handled “pistol.”

“General Patton was standing up in a tank and riding out through the battlefield,” he was the general,” Collins said, shaking his head in acknowledgement of the statue of the man.

Collins has memories of the Invasion of Africa, the Invasion of Southern France, of seeing the waters full of bodies. He cringes at memories of walking through a sea of dead soldiers, of smelling death all around and hearing the screams of the injured and the dying. He remembers what “the war” was like.

Collins served in the United States Navy until August 31, 1945. He came home find jobs hard to find and decided the military was the place for him. He enlisted in the U.S. Air Force in February 1947 and retired with the rank of Master Sergeant on August 31, 1963 after 20 years, two months and seven days of active military service.