Leaving a legacy: Hamlin contributes with leg and character 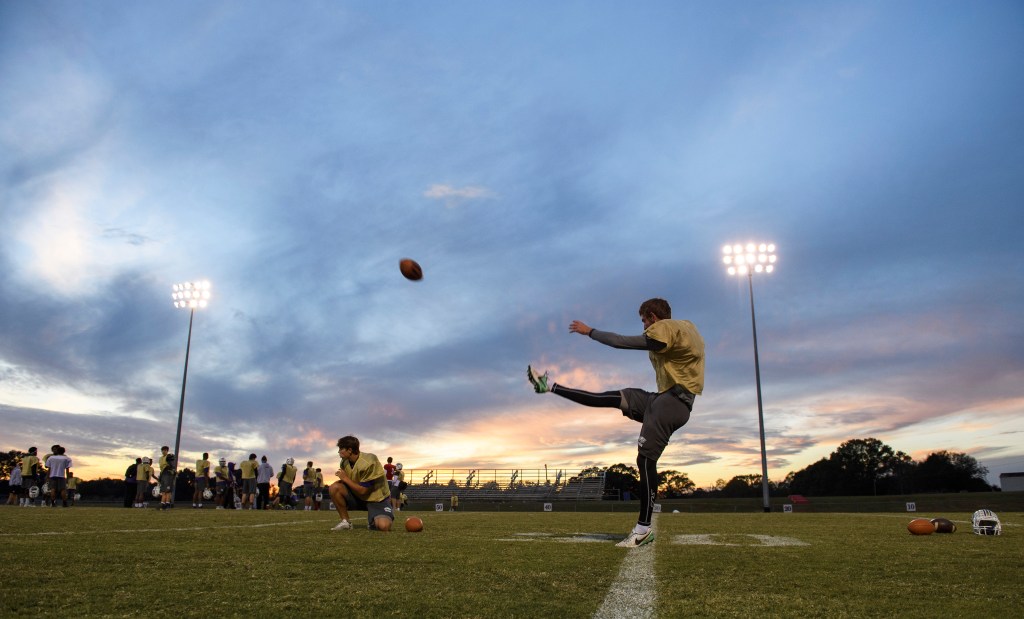 As strong of a right leg as Goshen High senior place kicker Dawson Hamlin has, it is through his maturity, leadership, character, work ethic and his faith, that he is an even more impressive young man.

Hamlin transferred after three years at Zion Chapel, but his impact in one season on the field for Goshen, and in Class 2A football, has made others take notice.

“Whenever you have someone like Hamlin, it’s a game changer,” said Goshen Head Coach Bart Snyder. “Watching the game film against St. Luke’s, as he started kicking the ball into and even out of the back of the end zone, their frustration became more apparent. Those guys are dangerous for St. Luke’s, and they want the ball in their hands. They know they can break one. But when you have someone like Hamlin that can kick like that, it changes things.”

Hamlin and the Eagles, 12-1, had a big night in a wild 56-52 win over St. Luke’s Episcopal of Mobile last week, advancing to the semi-final round of the Class 2A, AHSAA playoffs to be held this Friday in Goshen against Leroy, 11-2.

It is common in high school football in Alabama, at all levels, to see a team have limited success with kickoffs and extra points, and field goals are sometimes not even a consideration.

For a Class 2A team like Goshen to send a kicker of Hamlin’s talent out onto the field is rare.

At St. Luke’s Hamlin had seven of nine kickoffs not returned and he hit 8-of-8 extra points in a four-point margin of victory. The two non-touchbacks were designed as short, pooch kicks.

Hamlin, who also hit a 67-yarder in practice last week, is very thankful that Coach Snyder and his teammates invited him, and have accepted him into the family at Goshen High.

“My dad and I talked about it and prayed about it, and the Lord led me here,” said the senior.
“We realized it was time for a change, and after three years at Zion Chapel we knew that if there was going to be a run at a state championship at Goshen, it was going to be the 2017 season.

“Over the summer we all took a bus over to Samford (in Birmingham), and went to a big camp over there, and the summer before that too. Some of the players asked me to come over to Goshen, I told them I was going to Zion Chapel one more year, and this is where I am at now. Once I started practicing, it was unreal. I never had so many people text me so often, after camps, practices, asking how I was liking things so far, was there anything they could do? They were really, really accepting and encouraging. It has been great.”

Another senior teammate, tight end Iyan Hinkle, said Hamlin was considered one of the guys from the day of the first practice, and is an important part of the team today.

“He’s a great weapon,” said Hinkle, “We can get good field position on defense by him kicking it into the end zone, or if we need a field goal, and in a tight spot, he can easily kick in from the 40 on in. If we punt it, he can put it down to the one. He gets us in great field position, and we believe in him. He’s also a great person. He always asks about your day and is always a positive person. We have great team chemistry. We’ve grown up with each other, and whoever comes in, we welcome them as part of our family.”

Hamlin got his start as most kickers do, playing soccer. Beginning in Troy youth soccer leagues, Hamlin later evolved into kicking a football, and has visited numerous kicking camps while receiving positive support from his favorite fan, his father, Dr. David Hamlin.

“Playing youth soccer was absolutely instrumental,” said Dawson. “Almost every college kicker that played football comes from a soccer background. It’s a different motion, but you’ve got to have the basics from soccer. I played youth soccer in Troy, and Coach Doug McLendon was very influential. Since the end of last season I went to train in Birmingham in a one-on-one camp with Mike McCabe, who used to kick for the Chicago Bears. He flat knows his stuff. He is a pro if there ever is one. I trained my tail off with him over the summer.

“The most influential person in my own life is my dad. He always has told me he is not here to get in my face and tell me what I did wrong, but he is there to support me, to be a cheerleader. He is just so encouraging.”

The attitude and personality of a team is often defined by their head coach, and the Goshen Eagles mirror the strong, positive disposition of Bart Snyder. Coach Snyder is thankful for Hamlin’s abilities, but is more thankful of the character of the kicker.

“He is an outstanding young man,” said Coach Snyder. “His character, his faith – you just have to meet him. If you meet him, you understand. His ability to be a game changer in that sense is remarkable. He is so calm and so thankful. Sometimes as a coach you want to get on to somebody. You make a correction, and he tells you thank you all the time. You then say, okay, you’re playing football son, it’s okay not to be so nice all the time. But he humbles us all. Another thing I like about this young man is we want to build a kicking tradition here. He has taken several younger guys under his wing and started teaching them what he has learned at the many camps that he’s been to. He has shared that knowledge with them to get them ready for the future. We feel like in one or two years we will have another good kicker, because he is leaving his legacy.”

Hamlin and Coach Snyder have received attention from a number of college football teams, but the kicker hopes that he will be known, and remembered, for more than kicking a football.

“I could go a whole lot deeper, but since being at Zion Chapel and seeing what God brought into my life, I really found God while I was there,” said Hamlin. “He pushed me not to be average at football, but to work as hard as I possibly could, and that means working when nobody else is, when it’s not fun, when it’s dirty. You don’t see that many high schoolers that really want to talk about God, so if nothing else, I want to be a light. If I never play another down in football and people see Jesus in me, then I will be happy.”