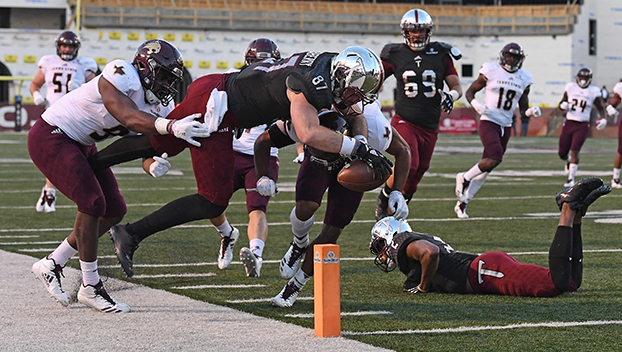 The Troy Trojans came out and dominated the Texas State Bobcats Friday, winning 62-9 in their final home game of the season.

The Trojans were in total control of the game from the start, scoring in just 39 seconds on the opening drive of the game to get on the board first 7-0.

The Trojans defense stifled the Bobcats in the first quarter, not allowing a single yard. Troy went on to put another 10 points on the board by quarter’s end.

It didn’t get any better for the Bobcats for the rest of the game. The Trojans tacked on another 24 in the second quarter while holding the Bobcats scoreless.

Troy twisted in the dagger at the very end of the second quarter, making the 24-point burst within the last 2:14 of the half. The scores included a 43-yard pass from Brandon Silvers to Tray Eafford, a 43-yard run by Jordan Chunn and a 19-yard pass from Silvers to Clark Quisenberry.

“We thought we would be explosive like that all year,” said head coach Neal Brown. “We’ve had some ups and downs, but we thought we could score like that.”

Silvers said the scoring spurt was all about tempo.

“Their defense didn’t really do well on our tempo,” Silvers said. “I feel like we hit a bunch of big plays with our tempo. Our tempo wasn’t as good early in the second quarter.”

Silvers was in top form for his final home game, throwing 4 touchdown passes before the night was over, the first time he has thrown that many since 2015. He finished the night completing 22 of 30 passes for 380 yards and no interceptions.

“We’ve got a good offense,” Silvers said. “We might not always put up 62 points, but that’s how the offense is supposed to be.”

Brown said Silvers has been playing at a high level all season long.

“Sometimes stats don’t tell everything,” Brown said. “If you take out the Boise game, Brandon has played at a really high level all year. I think he’s an NFL quarterback; look at the number of games he’s won over the past two years. He hasn’t had as many passing touchdowns, but it’s a lot easier to run it in to score a lot of times. I don’t want people to lose track of how good he is because of touchdown numbers. That’s ridiculous in my opinion.”

Jordan Chunn had a nice senior night as well with 10 carries for 80 yards and a touchdown. John Johnson and Emmanuel Thompson also came up big on senior night with a combined 150 yards receiving and big plays that set the Torjans up for touchdowns later in the game. Senior Clark Quisenberry also had a highlight touchdown in the second quarter, fighting his way in after a catch going over the top of two Texas State defenders.

“We honored 21 seniors tonight,” Brown said. “They’re a special group to me individually and special to the staff. I’m proud of how they handled today; I think they bought into the fact that we were celebrating them. Some of those guys played really well today and I’m proud that their families got to come see them. When I came here three years ago we talked about what we wanted to accomplish, what we wanted Troy football to be – playing with an edge. The guys that were there when I came in have been some of our best players.”

The win for the Trojans keeps them in the hunt for at least a share of the Sun Belt title. The Trojans are currently tied with Appalachian State, Arkansas State and Georgia State for the championship. Troy already has a head-to-head tiebreaker over Georgia State and can settle the tie with Arkansas State in the season finale against the Red Wolves next weekend.

Brown said the Trojans are focused on finishing with a championship this season.

“We’re in the exact same position we were at a year ago,” Brown said. “(Last year) we go to Statesboro, Georgia, we were 9-2, we got the ball on the 8 or 9 yard line and as time expired the pass was incomplete. We finished 9-3 and finished tied for second in the league. We’ve been working all year to get back in place for a championship opportunity. Now we’ve got to go finish the job.”

The Trojans will travel to Jonesboro, Arkansas next Saturday to take on the Red Wolves. The kickoff time is yet to be decided.