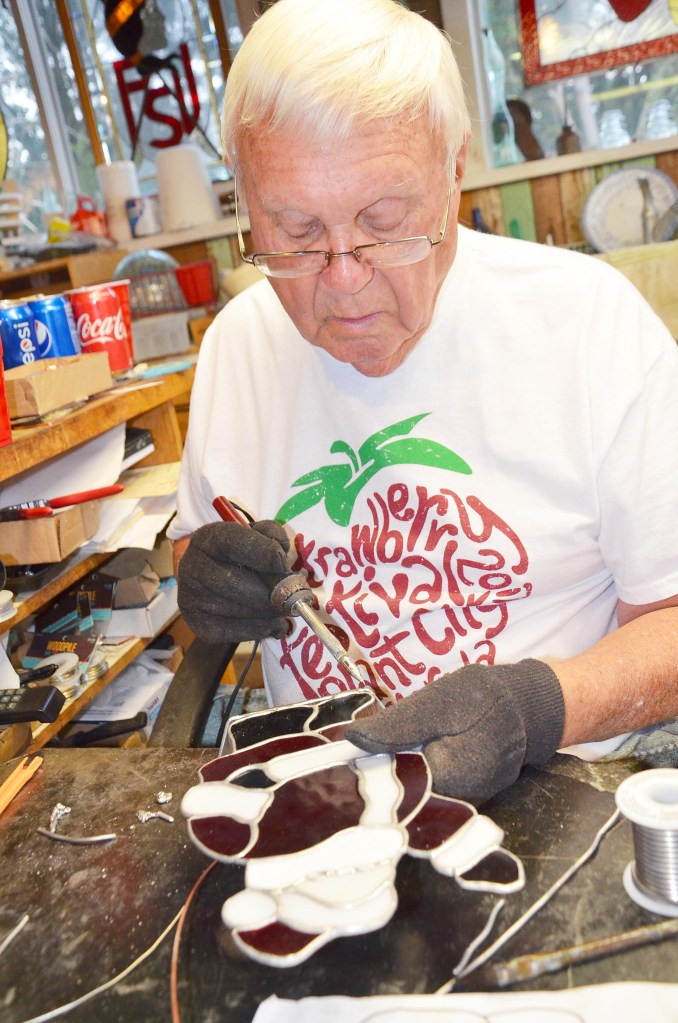 Open House at Adams Glass Studio is a Thanksgiving tradition for many people in and around Pike County. The annual event opens with a wine and cheese event on Friday night and continues throughout the weekend. Charles Adams, pictured, and David Adams have new creations for this year’s event including Christmas, college logo and “simply Southern” pieces and kiln-fired glass. Everyone is invited.

For Charles Adams and his family, the annual open house event at Adams Glass Studio the weekend after Thanksgiving could be somewhat of a chore. However, the Adams family considers it an opportunity for friends and neighbors to gather for a time of fellowship and friendly conversation aside from the hustle and bustle of the holidays.

“Just how many years we’ve been having open house at Thanksgiving, I’m not sure,” Adams said and added with a smile that it could be 30 but sometimes it seems like 50.

“It’s a busy weekend with Black Friday and football games but open house kind of gets people away from all that and offers them a place to sit and visit and talk about the good ol’ days,” Adams said. “The two words I hear most often at open house are ‘remember when…’ It’s that kind of event.”

Adams Glass Studio Open House begins as tradition dictates, on the Friday after Thanksgiving with wine and cheese from 6 until 9 p.m. and continues on Saturday from 9 a.m. until 4 p.m. and on Sunday from 1 until 4 p.m.

Visiting artists will include Walter Black with his amazing pottery, Carol McCraddy with her popular papyrus angels and Rex Thrash’s woodcrafts that will feature a new “breed” of birdhouses.

As for Adams, his holiday glass includes, as always Christmas angels and nativity sets.

“This year we have a stained glass backdrop for the manger scenes that really sets them off,” Adams said. “The backdrops can be used year around as backdrops or just stand alones.”

The Christmas glass includes ornaments of every kind, from Santa and snowmen to trains pups and cats.

Adams also has a new glass that is actually a throwback to his “old days” of making glass.

“We have a lot of glass do-dads that make great stocking stuffers and that little something extra for those who thought they had everything,” Adams said.

And for those who are looking for something tasty from the good ol’ days, Adams Nut Shop has Mule Days Maple Syrup, Mayhaw jelly, pepper jelly, honey and of course boiled peanuts and short Cokes.

“We have a lot of one of a kind items especially for Christmas but the best thing about open house is friends and neighbors coming together aside from the rush of the season,” Adams said. “We invite everybody to stop by this weekend. We’ll be glad to see you.”