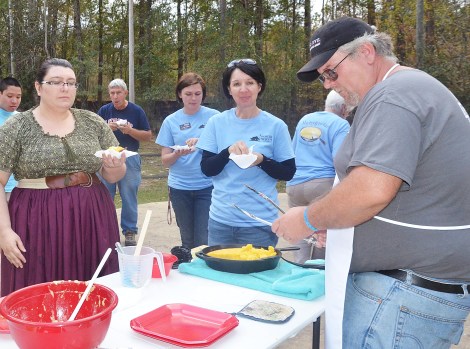 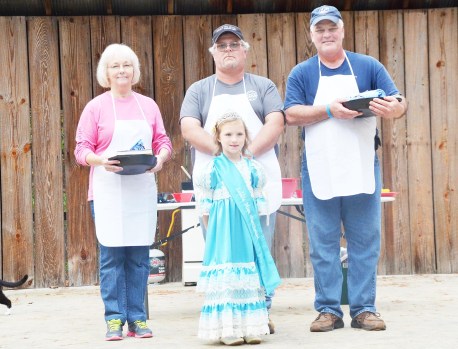 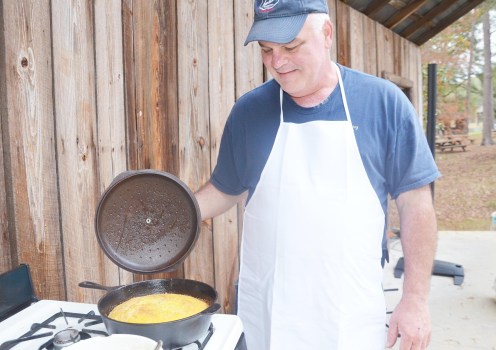 Bryan Barger of Luverne cooks up his first-place cornbread.

The preliminary round of the cornbread-cooking contest was held in the morning and the judges chose the best three entries for the on-stage cook-off at 2 p.m.

Martha Freeman finished in second place with her fried cornbread and Erik Pruitt took third place. Freeman and Pruitt are from Troy.

Barger said his winning baked cornbread recipe is no secret and he’s willingly shares it with “anybody that wants it.”

Barger was almost a reluctant participant in the cornbread contest.

“My wife thinks I make good cornbread and she got me in,” he said. “I learned to make cornbread from my grandmother and a lady that kept house for her. I sprinkle a little cornmeal on the bottom and sides of the pot to give the cornbread a little texture. That’s something that makes it a little different. It’s mighty good with ham and beans and a little honey won’t hurt it either.”

Freeman took the red ribbon in the Cornbread Festival cook-off with her fried cornbread.

“Fried cornbread is what I grew up on and I like it with all vegetables and all year around,” she said. “It’s a simple recipe. Just three ingredients – corn meal, salt and water.”

Freeman said she only turns her cornbread once.

“I use enough cooking oil so that it comes over the bread,” she said. “You want the grease to be hot so the cornbread will cook fast. If you let it stay in the grease long, it won’t be crisp.”

Pruitt also entered baked cornbread in the contest. He learned to cook cornbread watching his grandmother and great-grandmother at the stove.

“Cornbread was a staple for us,” he said. “I grew up on cornbread and buttermilk and I still like it. Cornbread is good with anything but especially field peas. I use eggs in my cornbread and the more eggs, the better I like it.”

“The cornbread cook-off was a lot of fun and we appreciate the support of the Lodge Cast Iron Company in providing us with the prizes,” Barley said. “Little Miss Cornbread Daelyn Seymour of Wicksburg presented the winners with their prizes. Our Baby Cornbread was Sydney Sansom of the Ramer community. We also had a photography contest and Emmy Lou Faircloth, a third-grade student at Covenant Christian School, was our winner.