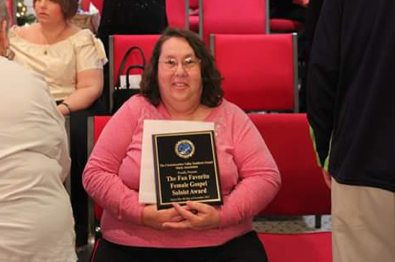 The association is based in Columbus, Georgia but has far reaches into Alabama as well.

Hartzog said to receive any award for what you do is special, but the Fan’s Favorite Female Award was especially rewarding because it came from the fans.

“The award means so much to me, first, because it was voted by the fans and, then, because it was such a surprise,” she said. “I never expected anything like this. I sing because I love the Lord and singing is one way I can show my love for Him and share that love with others.

Hartzog has been singing since she was “a little bitty girl.”

“God gave me a gift and I’ve always wanted to honor Him with this gift,” she said. “I’ve never had any voice lessons or musical training. A lot of people in my family sing. My dad played the guitar and an uncle was a professional steel guitar player and played for Ernest Tubb, Lynn Owsley and other outstanding country music stars.”

Hartzog said her family would have other musicians and singers over to their house and they would go to other houses to pick and sing.

“Of course, we sang in church and I loved to sing those favorite old hymns,” she said. “When I was about three years old, I sang my first solo in public. It was ‘Daddy’s Girl.’ I guess I never minded getting up and singing before people.”

Although Hartzog does not read music, she needs only to listen to words, “catch the beat,” and she’s “got it.”

She’s not exactly sure which part she sings but in church she sings the alto part.

“I just sing from the heart,” she said. “Whatever the part, it’s the part that God has given me and I sing it to His glory.

Hartzog began to sing what might be said as professionally in 2012. She recorded a CD of gospel songs and she began to feel like “a real singer.”

“I sing with soundtracks unless I’m singing in church, then I sing with a piano,” she said. “I don’t really have a favorite singer or group. I enjoy most anyone that sings gospel music. But I do have a favorite song or two. ‘My Home’ is a song that means a lot to me but, if I had to say one song is my favorite, it would be ‘God on the Mountain.’ That song lets me know that God is with me in the good times and He’s with me in the bad times and when things go wrong, He’ll make them right. That’s my God.”