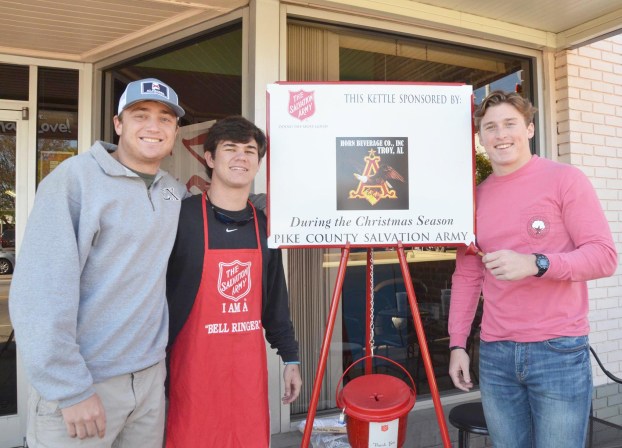 Bells will be ringing soon

“The Sigma Chi Fraternity has been ringing the bell for us at Momma Goldberg’s at lunch and we really appreciate the support of these young men,” said Kim May, Pike County Salvation Army director. “Not only have we been able to get off to an early start, it is encouraging to see young people involved in our Red Kettle Campaign.”

Strauss Outlaw said he is ringing the bell for the Salvation Army as a commitment to community service.

“I’ve always seen bell ringers and know that it’s a part of Christmas but, now I realize that the money that is donated helps people in our own community,” he said.

Gabe White and Tyler Hussey said they have also gained insight about the role the Salvation Army has played in helping those in need and continues to play today.

“We are proud to help by ringing the bell,” they said. “Other fraternities and sororities will ring, too. It’s a good community service project.”

“As always, we need bell ringers,” she said. “Whether you are an individual who wants to ring only an hour or two or a member of a group that volunteers to ring a morning, an afternoon or an entire day, you are making a difference in the lives of people in our community who are in need and there are people who are in great need.”

May said this is the time of year when elderly people who are living on fixed incomes are too often faced with decisions as to whether to pay their utility bills or have prescriptions refilled or even whether to visit a doctor.

“There are many needs in our own community,” she said. “Being a bell ringer for the Salvation Army is a way to help others.”

To volunteer as a bell ringer for the Pike County Salvation Army, call 334-808-1069 or visit the Salvation Army Service Center and Thrift Store at 509 South Brundidge Street in Troy.

Sweet 16: Eagles throttle Thorsby 42-8 to advance to the third round of the Class 2A Playoffs

The Goshen Eagles are heading to the third round of the Class 2A State Playoffs after they defeated Thorsby 42-8... read more