BACK AT THE GRIND: Robinette revives sugarcane mill 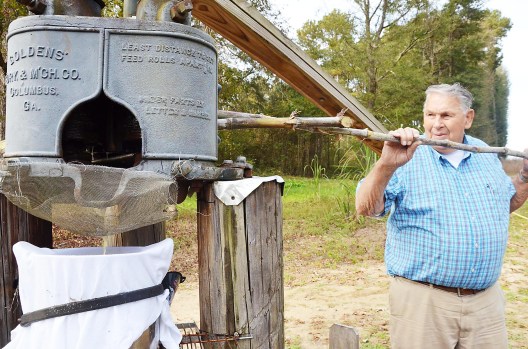 Lomax Robinette is breathing new life into an old tradition with his sugar cane mill operation on rural River Road. The cane mills of yesteryear were mule-powered. Lomax and Pat Robinette power their sugar cane mill with a modern kind of “mule.” 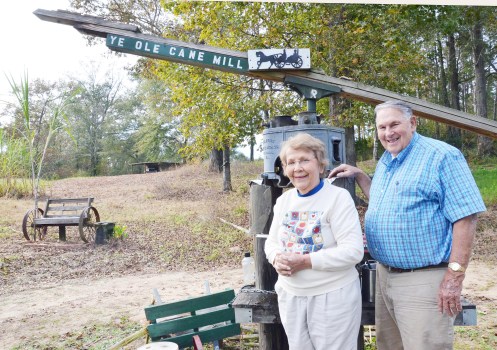 Lomax Robinette is breathing new life into an old tradition with his sugar cane mill operation on rural River Road. The cane mills of yesteryear were mule-powered. Lomax and Pat Robinette power their sugar cane mill with a modern kind of “mule.”

Lomax Robinette can’t exactly explain why he’s doing what he’s doing. Maybe he’s just carrying on a family tradition. Perhaps he’s doing his part to keep a dying art alive. Or it could be that he just enjoys grinding cane.

Whatever the reason, it prompted Robinette to invest  $25 in a rusting Golden’s New Model sugar cane mill 40 years or more ago.

And whatever it was that prompted the purchase also urged and coaxed Robinette into putting that mill to “good use.”

He picked out an open spot in a wooded area over on River Road as the site for his sugar cane mill.

He gathered up a few “thick” poles and a yea-high stack of 2x4s and built a frame to hold the mill and a “pole” to turn the mill. And it works “pretty good,” Robinette said, with a boyish grin and a hint of pride.

And, what’s a cane mill without a cane patch so he planted enough P.O.J. — “Plain Ol’ Juice” — to supply the expected demand and went to work in the same way that his daddy and his daddy’s daddy did before him.

“When I was growing up, a lot of people had cane mills because everybody wanted cane syrup,” Robinette said, adding that cane syrup was a staple for most households. “We had a cane mill but we didn’t make syrup; we let a neighbor do the syrup making. I never liked cane syrup. It’s just too strong for me.”

Robinette said syrup kettles were usually located near a creek because a lot of water was needed to make syrup. Syrup making was hot, sticky, bone-tiring work so he was glad his daddy was just on the juice-squeezing end of it.

“I’ve always liked cane juice,” he said. “A lot of people don’t or can’t drink it. I took a gallon of cold cane juice over to the Veterans Day lunch at Elam Baptist Church and I had to pour most all of it out. One lady said one little cup of cane juice would run her sugar up to 600. The older people couldn’t drink it and the younger ones wouldn’t.”

Robinette laughed at the thought that maybe his cane mill produces more cane juice than he can expect folks to drink.

“I just enjoy being out here at the cane mill,” he said.

“Grinding cane on a mill is the end of an era. You don’t see it much anymore and I don’t guess there’s much of a demand for cane juice.”

In the good ol’ days, cane mills were turned by mule power. Robinette doesn’t have a four-legged mule that whinnies but he does have a noisy, motorized “mule” that his wife, Pat, willingly pilots while he feeds the mill.

“The hard part of grinding cane juice is stripping and cutting the cane,” Robinette said. “I’ve got an old cane stripper and I’ve got some 15-foot cane so getting the cane ready for the mill takes a lot of work.”

The cane patch is just a hop and a skip from the downhill cane mill. So, the Robinettes can grind as much as is needed to meet the demand, which can usually be met with a couple of trips to the patch and back. “I can remember going to cane mills where the juice was caught in an old tin can with a crocker sack as the strainer,” Robinette said. “Rats and roaches had probably crawled all over that dusty ol’ sack. But I don’t guess anybody died from it or maybe we didn’t know they did.”

The Robinettes go to almost extreme measures to make sure their juice is A-1 or five-star pure. There’s nothing in their juice except pure ol’ juice.

Many fall mornings Lomax Robinette makes his way to the cane mill. He cuts a few stalks of sugar cane and feeds them into the mill as his wife powers the mill. Anyone who stops along the road is welcome to a cup of the purest cane juice around. Even those whose sugar shoots up at the thought of the juice can peel a sett and enjoy a chew that Robinette said is sweeter than even Juicy Fruit gum.

Those who travel River Road and want to watch an ol’ cane mill in operation are welcome to stop and watch or toast the day with a cup of P.O.J. or just “sett” a spell back in the good ol’ days.