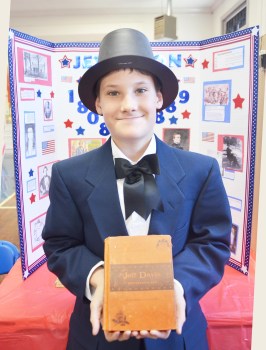 The sixth-grade students culminated their unit on the Civil War with the creation of a Banks School Wax Museum that featured the Civil War period characters of the student’s choice, said Phyllis Jackson, sixth grade teacher.

“The Wax Museum is one of our sixth-grade students’ favorite history projects,” Jackson said. “The idea of the wax museum is for the students to step back in time and bring historical figures of the Civil War era to life. By learning about the Civil War and circumstances surrounding it, they will understand why it is so important that history not repeat itself.”

Jackson said the sixth-grade students chose three characters of the Civil War era that they would like to research and present in the Wax Museum.

“They had many people to choose from and, if they didn’t get to portray their first choice of historical figures, they got one of their three choices,” she said. “We did have several students that portrayed the same person, only because they expressed so much interest in that person.”

Each student researched his or her historical figure, prepared a display board and the information to present at the Wax Museum and planned an appropriate costume.

Parents and family members were invited to visit the Wax Museum along with all Banks Middle School students.

Troy Police Officer John Daniel Johnson, who is a history buff, visited each classroom before the students visited the Wax Museum and gave them an overview of the Civil War, Jackson said.

“Having heard something about the Civil War and some of the major characters of that era better prepared the students for their visits. We really appreciate Office Johnson for his interest and involvement,” Jackson said.

As the visiting students came through the Wax Museum, they pushed the buttons that activated the “wax” figures.

Austin Boswell and Jayden Evans each portrayed Buffalo Bill Cody, who is not often thought to be a Civil War figure. However, Austin and Jayden said Cody was a member of the Pony Express and served as a scout for the Union Army during the last years of the Civil War.

There was little doubt about the role Harriet Tubman played in the Civil War.

“She worked with the underground railroad to get slaves to a safe place,” said ShaNiyah Williams. “She was brave and helped a lot of slaves get free.”

Rowdy Yates portrayed General U.S. Grant who was a great general but said he would have rather portrayed his favorite U.S. president, Abraham Lincoln. But he liked getting to carry a sword and a pocketknife.

Kaidyn Hazel, who portrayed Mary Todd Lincoln, said she found the lady Lincoln to be inspirational.

“She set up the president’s widows’ pension and did a lot of other things for women,” she said.

For Emily Hussey, learning more about Elizabeth Cady Stanton helped her realize the struggle women had in order to gain the rights they have as women.

“The Wax Museum was a great learning experience for our sixth graders,” Jackson said. “They learned a lot and were able to pass what they learned on to the other students. They did a great job and we are proud of them.”