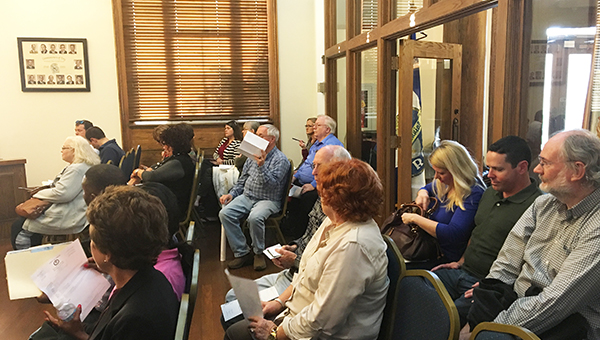 The City of Troy Board of Adjustments on Tuesday granted a variance allowing Sam C. Green of Montgomery to build 14 patio home lots on the curbed only street. City codes require curb and gutter streets for all patio homes.

More than a dozen residents of the Maple, Orange, Fairview street areas were on hand for the meeting to voice concerns about the proposed Highland Oaks development.

“A lot of our concerns may be coming from misinformation,” said Von Brantley. “But we have questions.”

The property in question is located on the southern side of Vine Street and east of Willow Street in an R2 zoned neighborhood. Walt Stell, who spoke on Green’s behalf, told the board that the current property owners had received approval nearly 10 years ago to develop this section of land. That approval expired because no action had been taken by the developer within a year of final plat approval. “Mr. Green has offered to purchase the property, pending final approval of his plan,” Stell told the board.

Green’s proposal includes the construction of 14 patio homes on the property, with two access drives. He said the homes would be 1,100 to 1,300 square feet each and would conform to zoning codes and requirements. “We’re not trying to build low-income housing,” Green said. “We’re going to build homes that sell in the $130,000s or higher.”

The average appraised market value of homes in the neighborhood is about $85,000 according to records from the Pike County Tax Assessor GIS website.

Stephen Smothers, like other residents, sought specifics on Green’s plan for the development.  He questioned if Green would be required to honor the specifications outlined in the current property owner’s plans. “Those called for the homes to be 50 percent brick. Will they still be 50 percent brick?”

“Everything we are going to do will be within the laws of the city,” Green said. “We’re not trying to take away from the neighborhood; we’re trying to add to it.”

Jack Norton, chairman of the Board of Adjustment, said the board could only address the specific variance request to allow the construction of patio homes on a curbed only street. “That is all we can address here today.”

Mayor Jason Reeves also spoke on Green’s behalf. “In this case, he’s trying to put a better product on the property there than what the code allows,” Reeves told the crowd. “He wants to build a product that is more reflective of the neighborhood than the code allows.”

Because the property is zoned R2, developers could build duplex or single-family residences on the property and could build structures with a lower price point. The city has extensive codes in place for patio home developments, including requirements such as curbing and gutters.

Residents also raised concerns about water runoff and drainage, citing existing erosion issues on the property and runoff onto nearby properties. “There’s a serious erosion problem on that property,” said Nikki Hall. “That property runs off into my property … and when they add 14 more houses it’s going to get worse.”

Reeves also said the city is working with engineers to address drainage and runoff issues and Norton reiterated that any drainage issues would have to be addressed by the developer through environmental impact studies and engineering plans.

Any final plans for a subdivision must go before the city’s planning board, Norton said.

In other business on Thursday, the Board of Adjustments granted a variance to Matt and Stephanie Baker to allow construction of a wall of up to 11 feet high at the back of their property at 215 W. College St. and a variance to Jerry Spurlock to allow three PH-50 lots on a curbed only street along A Street at 300 Corman Ave., where he plans to build two homes.