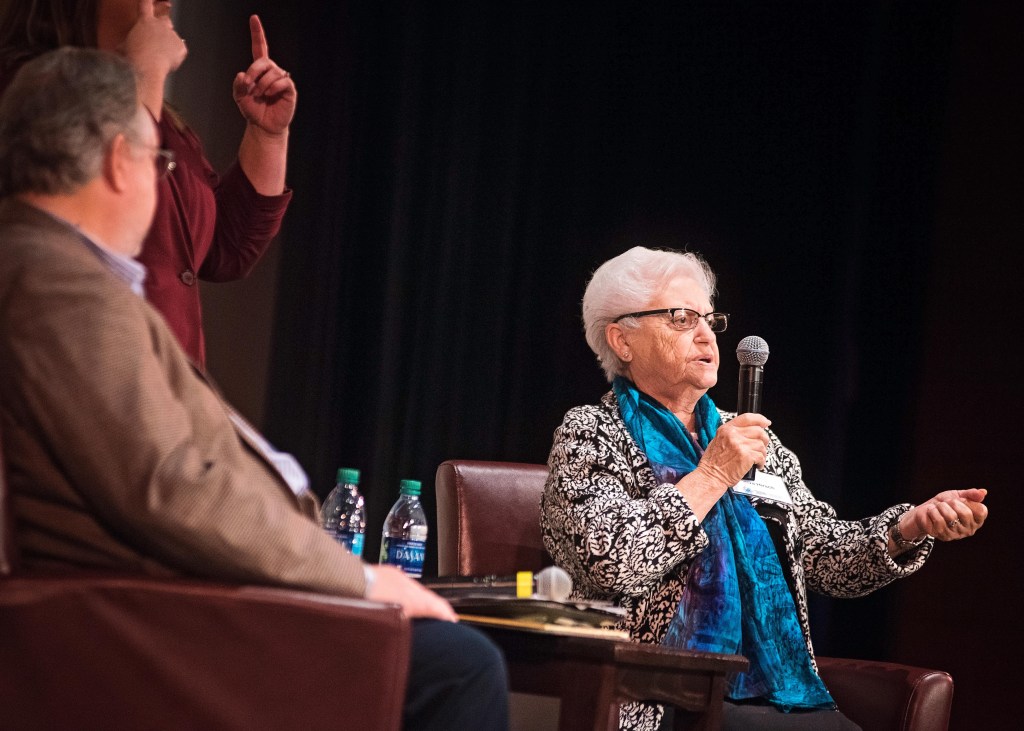 Holocaust Survivor Riva Hirsch spoke to a full auditorium in Crosby Theatre on the Troy campus on Wednesday Nov 15. Mrs. Hirsch who was taken by the Nazi’s when she was seven, along with her family, spoke of her experiences in surviving the camps for an hour with students and others.

When a college student is so captivated by a story that he is moved to put his arms around the teller, then it’s a story that needs to be – must be told.

Following Riva Hirsch’s presentation at Troy University Wednesday, freshman Jacob Parauka made his way to the stage and gave the Holocaust survivor a hug.

“With all that Mrs. Hirsch has been through, she deserves all the hugs she can get,” Parauka said. “She is a breathing piece of history. We needed to hear her story just as we need to hear the stories of our World War II veterans. Hearing their stories is the only way we can know – really know.”

Riva Schuster Hirsch told her story with great passion but without tears. Her mission in telling her story is not to relive the horrors of the Holocaust but to make sure that it never happens again.

“And, it could,” she said. “It could happen again and it could happen here. There are those who deny that the Holocaust ever happened. I am here to tell you that it did.”

The horrors of the Holocaust began in 1941 for 7-year-old Riva and her two brothers, one older and one younger, in their modest but comfortable home in Romania.

Until Jacob came, Riva father had not spoken the message to his children.

“My papa came and told us we had to leave,” she said. “We had balls and dolls and he said to leave them. We could take nothing except packages our mother had prepared. He told us to kiss the mezuzah as we walked out the door because he did not think we would ever come back again.”

The family walked into the forest, which was a place for hiding. Planes were flying overhead and bombs could be heard in the distance. In an attempt to protect their children, Riva’s parents went to the home of their friend, Jacob, asking for a hiding place.

“My mother stripped herself of all of her jewelry – her diamonds and earrings – for the favor,” she said.

The family hid in Jacob’s mill until doing so was unsafe for him and his family.

“Jacob and his family would be killed if we were found,” Riva said.

The family walked back into the forest and walked and walked with no place to hide.

“Our shoes were broken; we were hungry, just walking and walking until we were captured,” she said. “Then, we were ripped apart. I was pushed away, crying. We were given yellow stars to show that we were Jews.”

From there, Riva told how the trains would come, not passenger trains, cattle cars and dead bodies would be thrown out. She, a little girl with braids and lice in her hair, stood watching, waiting to be loaded onto the train.

The horrors that she witnessed deeply embedded in her memory – the drowning of many people, animals ripping dead bodies apart, stepping on the bodies of children not much younger than she was, and people dying like flies and the stench of it all.

Riva was taken to the “main camp.” She was naked, famished, freezing, her teeth were bleeding and she was sick with malaria and typhus.

“I could not walk,” she said. “I crawled. That was not life. One day a miracle happened. A man came and turned me over and said don’t cry. Don’t say a word.”

She was place in a wagon under hay and told to play dead if she were discovered. At the end of the journey, two gates opened for the little Jewish girl and a lady with a white strip on her head took her inside to be hidden.

From 1943 until 1945, the sick little girl was kept hidden in a six-foot square bunker at the convent with only rats and mice to keep her company.

At the age of 12, Riva was liberated. She was pulled out of the bunker by the legs and had a blanket wrapped around her. She was told she could leave but she could not walk. She lay on the sidewalk until a couple stumbled over her and carried her on their backs for a while. But they left her only to stumble over her again. This time, the couple said they would not leave her anymore.

The Red Cross took the sick, naked, lice infected little girl and gave her a “peel of orange.”

Lying on the ground, she looked up a saw a naked filthy man with a straggly beard.

“I did not know who he was but he said, ‘I’m your papa,’ and he hugged me. I wanted him to stay with me but he went to look for my brothers.”

He found Riva’s mother and two brothers.  He found the younger brother more dead than alive. He passed away. The older brother was also found but also died.

Riva was sent to a refuge camp in Cypress where she stayed for two years. She arrived in Israel in 1948 and was reunited with her family. In Israel, she met her husband, Aisic Hirsch, who was also a survivor. In 1962, they moved to New York and Birmingham in 1992.

Riva Hirsch is one of two Holocaust survivors from Alabama who tell their stories but both share their stories with the warning that “This could happen again.” Only by the telling and receiving of the story of the Holocaust can it be prevented from happening again, Riva said.