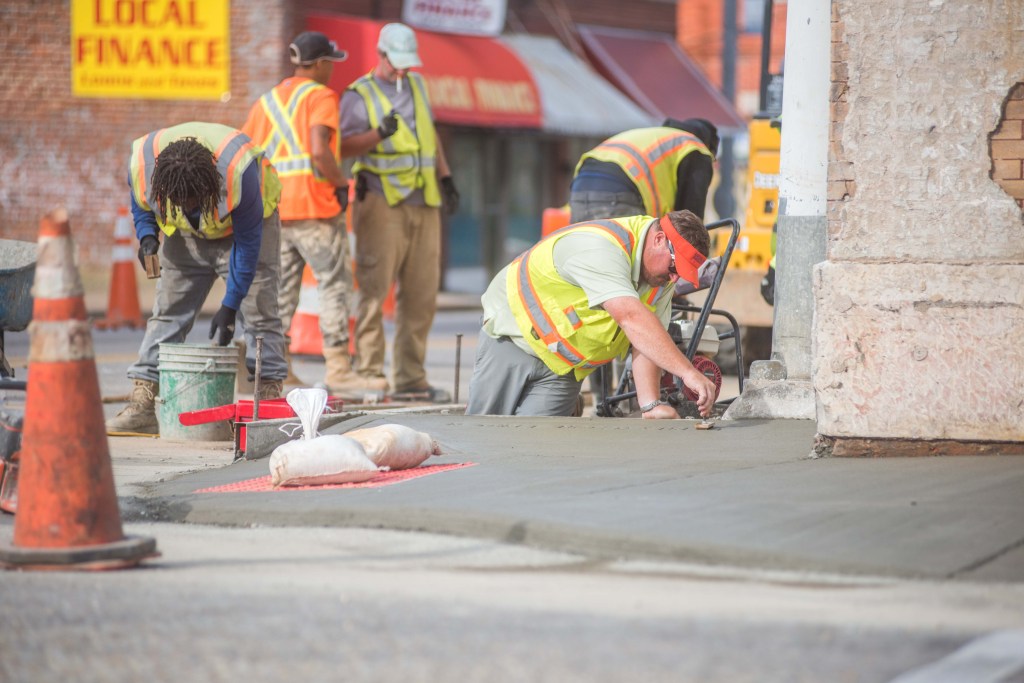 Messenger photo/Jonah Enfinger Crews with Geisler Contracting work to stamp street names into the concrete as they build new sidewalks in the 100 block of North Three Notch Street in Downtown Troy. The sidewalk improvement project includes the addition of lighting and landscaping, as well as making the sidewalks ADA compliant. City officials said the project won’t interfere with upcoming Downtown events.

An ongoing sidewalk improvement project shouldn’t interfere with the annual Christmas parade or other upcoming activities in Downtown Troy.

“There won’t be any work going on during this weekend’s Downtown Open House or during the Christmas parade (on Dec. 4),” said Melissa Sanders, planning and zoning administrator for the City of Troy. “However, visitors may find part of the sidewalk closed as the repairs are made.”

Crews began working on sidewalks this week in the 100 block of North Three Notch Street, north of square, and the improvement work could take up to a month to complete.

“This is part of our 2014 TAP grant program,” said Melissa Sanders, planning and zoning administrator for the City of Troy. “The grant allows us to make the sidewalks ADA compliant while extending pedestrian lighting and landscaping to incorporate these areas of Downtown into the Square.”

And while the improvements will be much welcomed by patrons and businesses, Sanders said officials realize the work comes with temporary inconveniences. “(We)  will have no parking along the street during the sidewalk construction in this area,” Sanders said. “In an attempt to maintain two-way traffic, the traffic will be shifted over the parallel parking area at times during construction for the safety of the workers and pedestrians in this block.”

Motorists are being asked to use extreme caution during the construction period and to watch for pedestrians.