HONORED: Pair of WWII vets among those honored during Elamville event 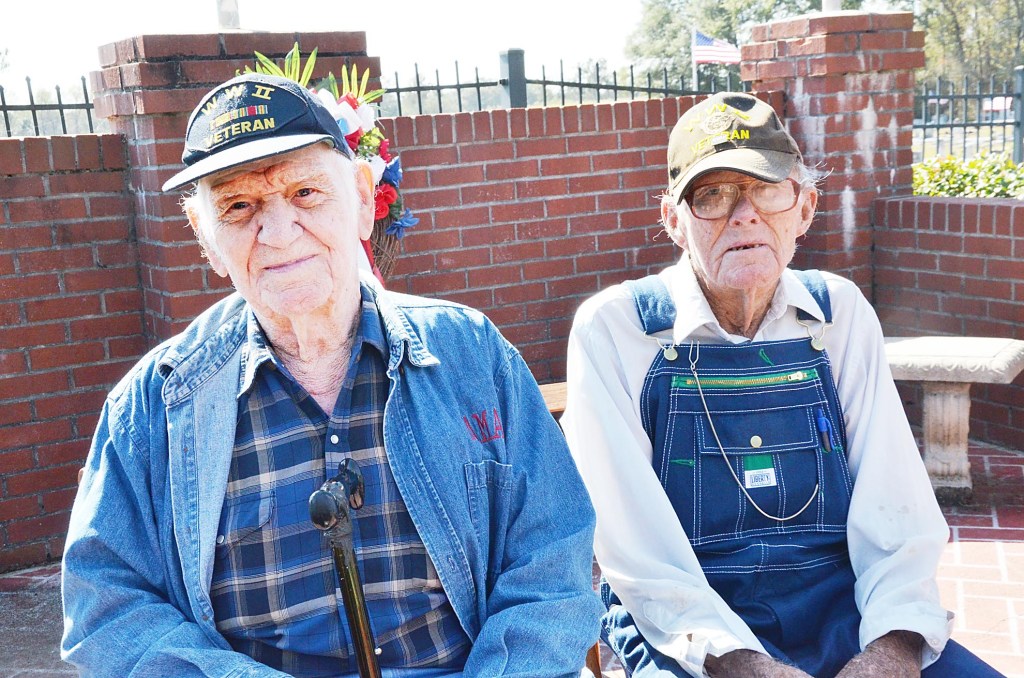 Among the veterans in attendance at the Veterans Day program at Elam Cemetery were Word War II veterans, Coy Danner, left, and Max Thrash.

The Veterans of Foreign Wars Post 7055 in Brundidge hosted three Veterans Day ceremonies Saturday at the Veterans Memorial in Brundidge, the post home and at Elam Cemetery in Elamville.

Alabama Air Force Reserve Col. Ben Bowden spoke to a large gathering of veterans and area patriots at Elam Cemetery at the 11th hour of the 11th day of the 11th month.

Bowden said he always wanted to be a veteran.

He said his father, Lawrence Bowden’s, service in Korea and the National Guard were driving factors. He joined the military through the ROTC program at the University of Alabama, spent about five years on active duty with the Air Force and then entered the reserves. In 2008, he was deployed to Balad Air Force Base, Iraq as a legal advisor to the special operations air wing.

Bowden said all veterans have stories to tell and one common denominator in their stories is the story of sacrifice.

“As veterans, we sacrifice our identity when we first get to basic training,” he said. “We sacrifice career opportunities when we legally obligate ourselves to a tour of service. We sacrifice relationships when we constantly move to new assignments or deploy. And, all too often, a veteran will make the ultimate sacrifice for his country.”

Bowden told the story of SSgt Nathan Chapman, a member of the U.S. Army’s 1st Special Forces group, who told his father after 9/11,  “America’s going to war over this and they’re not going without me.”

In closing, Bowden spoke about veterans’ issues, which he said are important.

“But, in my opinion, if you asked most veterans what they really want, you’ll be surprised to find out it has nothing to do with health care, a pension or even recognition,” he said. “What most veterans want to know is that their sacrifice was worth it – that their particular sacrifice meant something.

“As you honor veterans by celebrating Veterans Day, what I hope you remember is that you honor them most by doing your part to keep this a great nation. May God bless each of you and may God continue to bless the United States of America.”