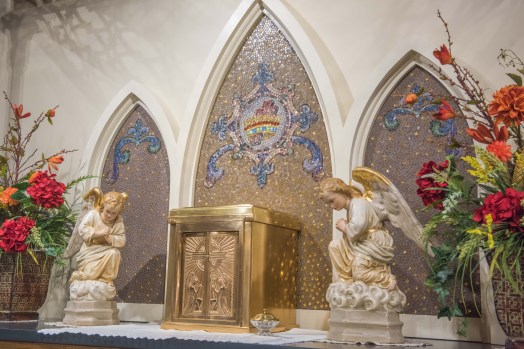 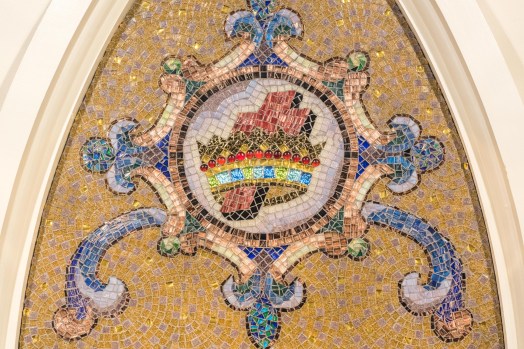 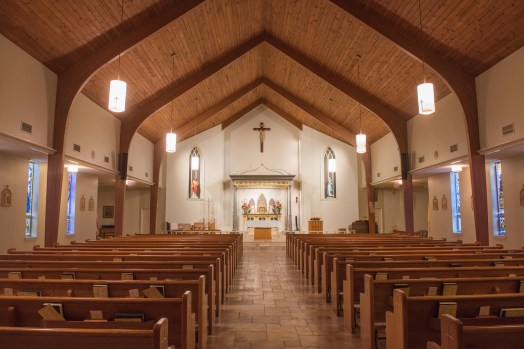 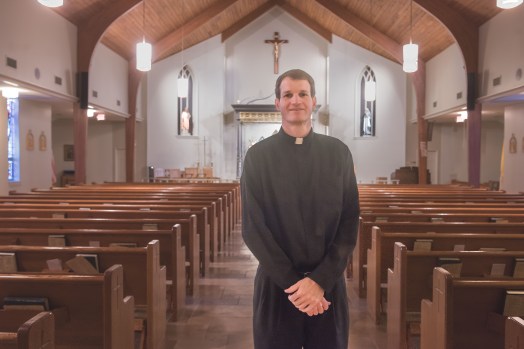 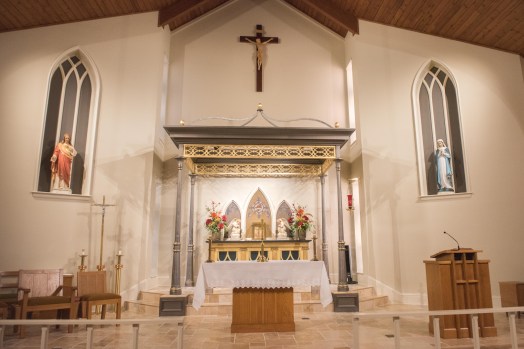 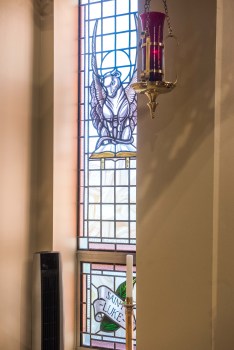 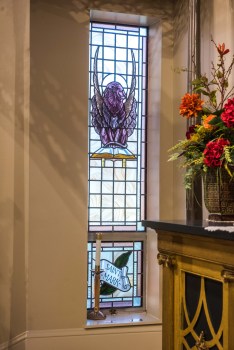 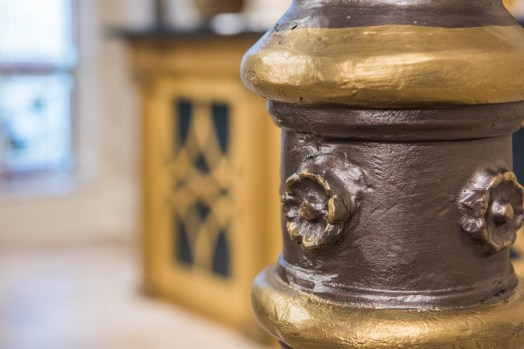 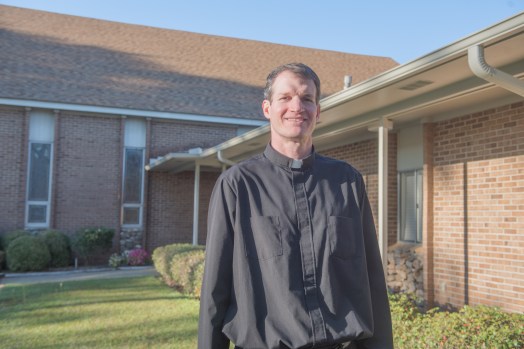 St. Martin of Tours Catholic Church in Troy celebrated 100 years in the year 2015.

The Rev. Den Irwin, along with his parishioners, realized the milestone year was a great opportunity to renovate the storied church to give it a more sacred look.

“We began to think and to plan,” Father Irwin said. “Those plans included the removal of the carpet and replacing it with a tile floor and the addition of a baldacchino –a canopy.

As church renovations plans at St. Martin were finalized last year, Father Irwin was left with a major question as to what to do behind the tabernacle, which was brought to St. Martin from the old St. Martin church in downtown Troy.

“Decoration was needed to better complement the new baldacchino, the new high altar- which is about one step and half higher- and the side niches for the statues of Mary and St. Joseph,” Father Irwin said.

The idea for the decoration came from parishioners Anne Christensen and Carolynne Estis who proposed mosaics. Christensen and Estis aren’t professionals, but have a knack for handicrafts and a passion for church beauty. Christensen previously worked on a painting of mosaic tiles at Christ the King Catholic Church in Andalusia and completed a faux mosaic of the Paschal Lamb at Our Lady Queen of Mercy Catholic Church in Montgomery. Although neither one had ever done a mosaic before, they were confident they could do it and embarked on this ambitious project with enthusiasm.

“People will sometimes said they do a certain thing but what these ‘volunteers’ did blew me away,” Father Irwin said.

Christensen and Estis labored more than 600 hours over the past year, as they used thousands of pieces of glass of at least 30 different colors to create the mosaics which were completed in July and installed by the construction company in charge of the church renovation.

The mosaic consists of three parts—a central piece about four feet tall and two lateral ones about three feet tall. The design of the central mosaic is based on a stained window found in the old St. Martin church on Walnut Street, locally known as The Emporium.

The design represents a cross within a jeweled crown inserted in a round medallion decorated with fleurs-de-lis and other natural motifs. The mosaic repeats this imagery, but it has also been adapted to include references to St. Martin of Tours’ life, the fleurs-de-lis and the four small green triangles representing pine trees that are part of the saint’s story.

The background is designed in waves and is decorated with gold and purple tiles.

“One of the hard debates we had was whether or not to have the same background color for all three mosaics,” said Christensen. “Over time, we ended up kind of melding them together, the purple and the gold. The side mosaics feature a natural motif mounted by a fleur-de-lis against a prominently purple background interspersed with gold.”

The three mosaics allow the observer to notice that the golden pieces are not distributed evenly but are more prevalent at the top and at the bottom. Christensen said this signifies the outpouring of God’s grace for us: Graces come down from Heaven and intensify as they get close to the Precious Body in the tabernacle.

Christensen and Estis wanted to make sure the mosaic was not a distraction not the center of attention. The focus should always be directed toward Christ in the tabernacle.

“We wanted to complement the tabernacle but not take anything away from it because Christ is and has to always be the center,” they said.

The final result is more beautiful than Father Irwin had expected.

“What a magnificent work — a real work of love, something that will always be here,” he said. “The mosaics certainly add a lot of beauty to the church and they make a great connection between the old church downtown and the present church. People have been astounded by the work and even more impressed by the fact that it was done by two individuals who are not professionals, just two dedicated parishioners.”

Father Irwin said the tile is not as quiet as the carpet but the parishioners are getting accustomed to it.

“We are happy and pleased with the renovations,” he said. “People have expressed their appreciation for the renovation. The interior designers, Crystal Walker and Jan Hale understood what we wanted and did a marvelous job.

“The mosaics bring out, in a more powerful way, the sacredness of the tabernacle. What a great place for something very precious like that. I think it helps you to pray when you are in a place that speaks about the holiness of the thing that happens there. It has definitely put the icing on the cake.”