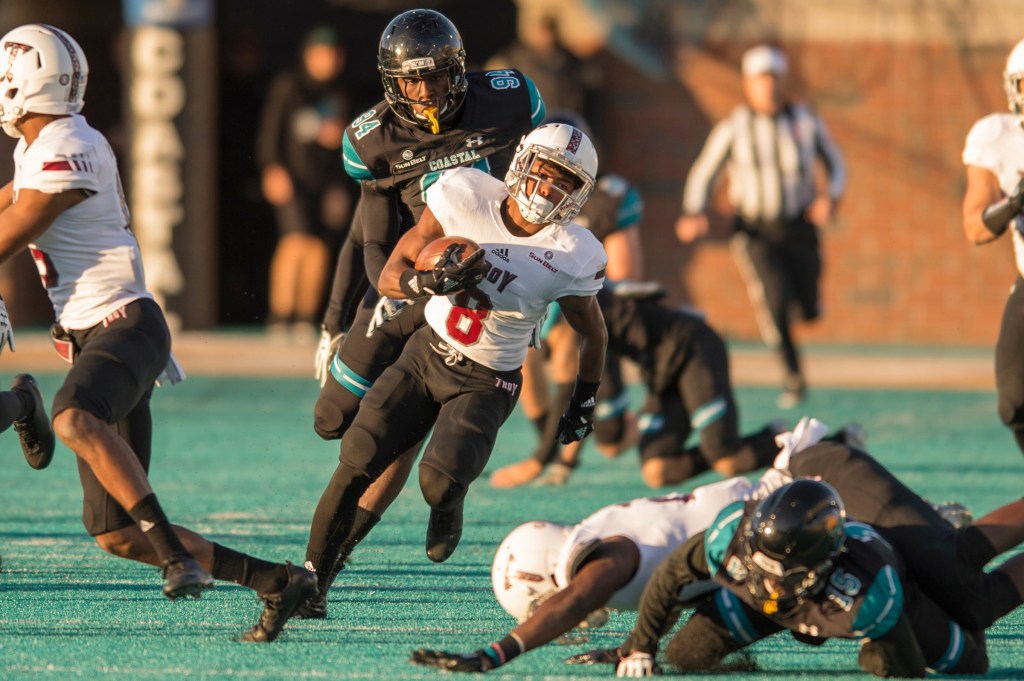 “Anytime you can go on the road and handle business in our conference, it’s a positive. This win gets us to 1-0 this week, 5-1 in the conference and 8-2 overall.”

Chunn found the end zone for the 46th time of his Troy career with an 8-yard run in the second quarter. It gave the Trojans (8-2, 5-1 Sun Belt) a 28-10 lead and established Chunn as Troy’s all-time touchdown leader as he passed Troy Hall of Famer Danny Grant in the annuals of Troy history.

Troy’s defense continued to be a dominant force despite playing without three starters in the first half and two starters the entire game. Troy remains just one of three teams in the country to have not allowed more than 24 points in a game this season.

The Trojans held the Chanticleers (1-8, 0-6) to just 258 yards in the game and 94 yards on the ground. It marked the seventh time this season that Troy has held an opponent under 100 yards rushing this season tying the school’s FBS record.

One week after recording 16 tackles, linebacker Tron Folsom recorded 11 stops to lead the Trojans, while Marcus Webb led Troy with 1.5 sacks and 2.5 tackles for loss. Troy finished the game with five sacks – the fourth time in the last five games with four or more sacks – and 13 tackles for loss.

Quarterback Brandon Silvers used his legs to put Troy up 21-10 early in the second quarter with a 10-yard run – his fourth rushing touchdown of the season – before Chunn sent Troy to the break with a 28-10 advantage.

Kilton Anderson completed 13-of-25 passes for 157 yards and two touchdowns for Coastal Carolina, while Osharmar Abercrombie rushed 14 times for 55 yards.

Troy improved to 66-38 all-time in Sun Belt Conference games … that is the most wins in the league since 2004 (when Troy joined the conference) and the second most all time (the Sun Belt was formed in 2001).