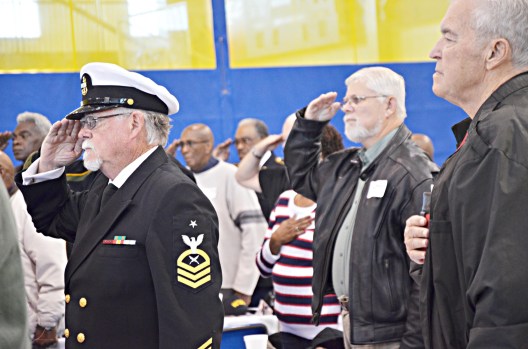 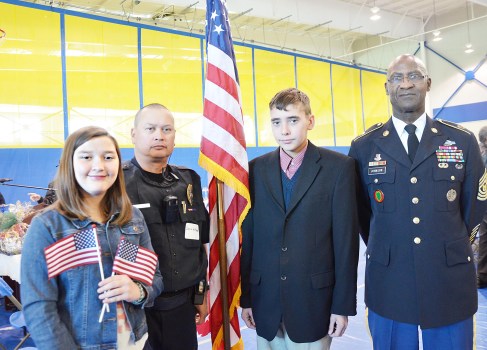 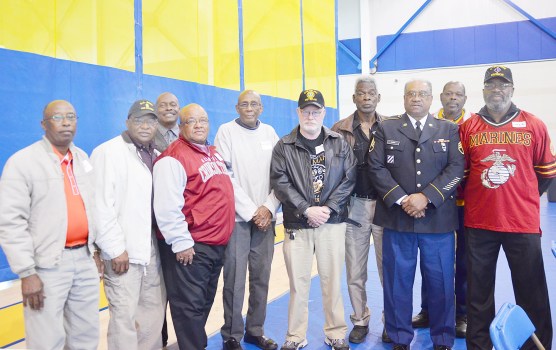 The Colley Senior Complex in Troy honored the veterans of America’s wars with its annual Veterans Day Breakfast Friday at the Troy Recreation Center.

Catherine Jordan, complex director, said it was the senior center’s tremendous privilege to honor to the veterans on their day but the veterans are heroes and should be honored every day for their sacrifices and service.

“If it were not for our veterans, we would not have the freedoms that we enjoy today,” she said. “We should keep them in our thoughts and prayers every day of the year.”

Sgt. Major Anthony Johnson, JROTC instructor at Charles Henderson High School, was the featured speaker for the breakfast event. He, too, spoke of the service of all veterans, whether it was on the home front or defending freedom in some distant land.

“This is our day,” Johnson told the assembly of veterans, their spouses and children. “This is our day to be honored and to also honor those who have served to gain and preserves the freedoms that we have.”

Johnson said he lived half his life as a child and the other half learning from children.

As a part of the program, the students discussed “What is a veteran?”

“They learned that a veteran is one who fights for freedom in foreign lands,” Johnson said. “They also learned that veterans are those who never go to war but serve their county in times of peace and here a home.”

The students learned that veterans can be women as well as men.

“And, I consider the wives of men in the military veterans,” he said. “The wives make sacrifices, too. They keep the family together and the home. They accept the responsibilities and pay the bills. They are American veterans. Today is about us. It’s about veterans. It’s our day.”
Johnson gave the veterans an opportunity to speak and veterans of America’s modern wars accepted. Billy Jackson, an Army aviator with the Army Air Corps during World War II, spoke about commitment to country and dedication to a cause greater than one’s self.

Charlie “Sarge” Dunn, a veteran of Korea and Vietnam, gave God the glory for “seeing me through” during times of war. Freddie Turner spoke of his time as a medic in Vietnam. “My eyes still leak at all I saw,” he said. John Lester served in the Air Force and expressed his hope that all of those who enjoy the freedoms for which the country’s veterans fought and died “get it” when it comes to what it means to be an American.

Jordan thanked the veterans for their service to their country and to their fellowmen.

“We will not forget you, your service and sacrifices,” she said. “Thank you all. This is your day.”