Trojans season comes to an end with loss to Volunteers 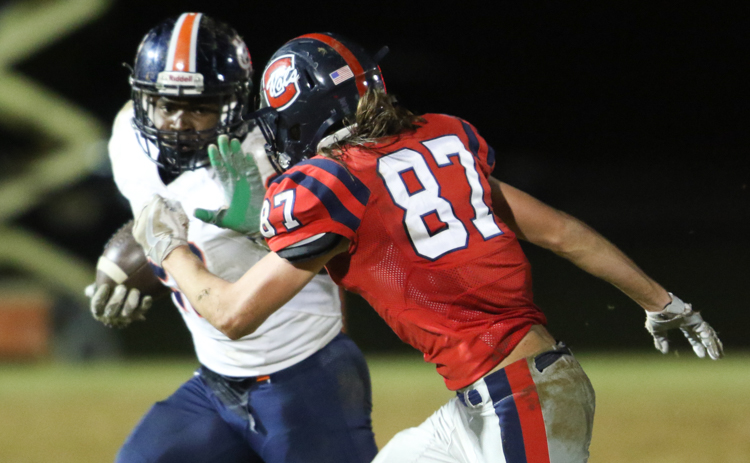 LINEVILLE – The running game of Central High of Clay County was too much for the Trojans of Charles Henderson Friday night, as the Volunteers ran away with a 42-14 victory over CHHS in the first round of the AHSAA Class 5A playoffs.

Camerun Peoples rushed for 174 yards and three touchdowns to pace the Volunteers, sending Central to the second round next Friday against Demopolis.

CHHS Head Coach Brad McCoy was disappointed for his players, in a year that was full of injuries and challenges.

“It’s not the outcome that our team or I wanted, we knew it was going to be a challenge, I just think it came down to early on, we were not able to get off the field on third down,” said McCoy. “ They completed two big third down conversions to continue drives that later turned into touchdowns, and in the second half we came out with the correct and right kind of intensity to try to claw our way back in the game, but they got some breaks that led to scores.

“For our seniors and our football team, we had a lot of adversity this year. We played without some people, having to play three 9th grade offensive linemen tonight. Those are just excuses, but I’m stating facts, that we just did not have some guys that normally we would have, and it happened throughout the whole season. We would patch some holes and another leak would spring up somewhere.”

Central scored on their first possession of the game when Peoples went 19 yards for the TD, Dawson Harry was good on the extra point, and the Vols led 7-0 at the 8:44 mark.

Peoples scored his second touchdown early in the second quarter, a 49-yard gallop, the extra point failed, and Central led 13-0 with 6:56 to play in the first half.

Central quarterback Benjamin Street found Shamari Simmons for a 14-yard touchdown completion on the next series, the try for two was successful with Street running it in, and the Vols led 21-0 with 3:47 to play in the half.

CHHS got on the board on a 41-yard touchdown bomb from Noah Lowery to DQ Toney, Cameron Bush was good on the extra point, and the score was 21-7 with 8:15 remaining in the third.

The Trojans scored a touchdown on an 18-yard pass from Lowery to Kelshun Campbell, Bush added the PAT, cutting the lead to 35-14 at 5:40 to play in the contest.

Central scored its final touchdown on the next series, with Quentin Knight taking it in from 4 yards out for the 42-14 lead with 4:50 remaining, which held up to be the final.

CHHS was led in rushing by Jared Wilson with 55 yards on 13 carries, while Lowery gained 48 yards on the ground and completed 19 of 32 passes for 261 yards.

Central was led by Peoples with 174 yards and three TD’s, while Knight added 79 yards and Garrett 75 yards.

Coach McCoy was complimentary of his coaches and players for their effort this season.

“My hat is off to our coaches, this staff, and these kids for handling the new things we were trying to teach, and they took it all in stride,” said McCoy. “My guys are sore losers. They just don’t like to lose. Sometimes we have to handle that. I’m still proud of our team and some of the strides we made this year. We did improve throughout the season.”