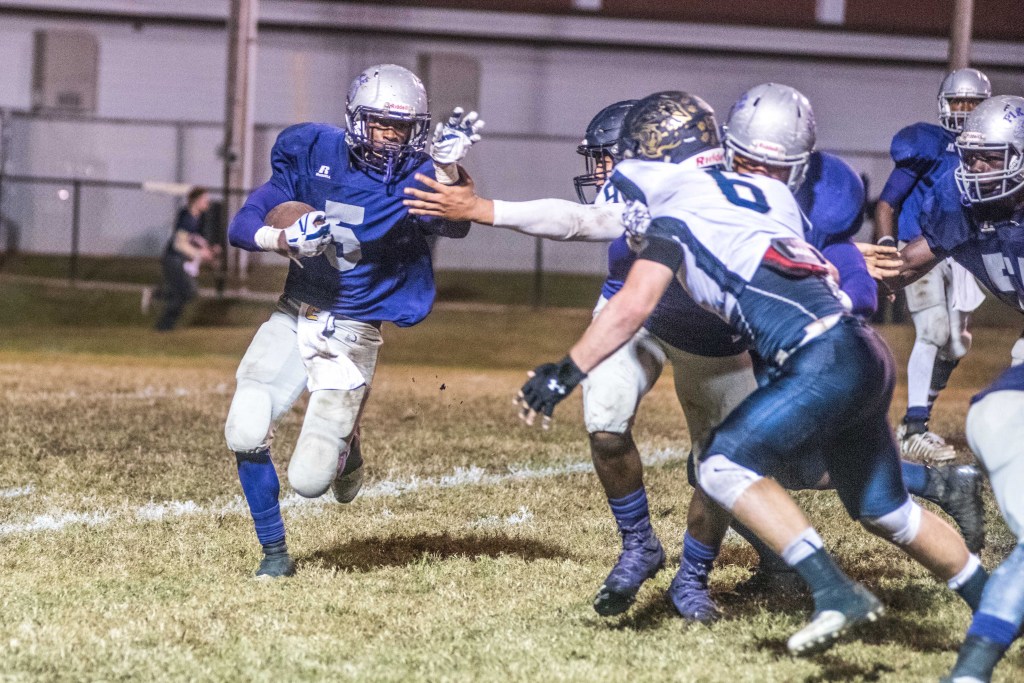 Photo/Jonah Enfinger Jahzarian Lampley carries the ball for Pike County during their game on Friday night. The Bulldogs fell to Mobile Christian 21-0.

The Pike County Bulldogs played host to the Mobile Christian Leopards in the first round of the class 3A playoffs on Friday night. The Leopards stymied Pike County in a 21-0 win to move on.

Pike County opened the game by forcing Mobile Christian into a three and out but just a couple of plays into the Bulldogs first offensive possession, a bad snap sailed over quarterback Jaidyn Wilson’s head and was recovered by the Leopards at 24-yard line.

Mobile Christian could not capitalize on the field position, falling short on fourth and two. After forcing Pike County into punting inside its own 10-yard line, the Leopards continued to win the field position battle by pinning the Bulldogs on the one-yard line with a punt.

Pike County could not move the ball and punted again. On the ensuing Mobile Christian drive, quarterback Alex Moore had a deep pass intercepted by the Bulldogs at the one-yard line and Pike County started its second consecutive drive backed up against its own end zone.

The two teams traded punts as the first quarter came to an end. Pike County started the second quarter with the ball at its own one-yard line for the third straight drive. Once again, the Bulldogs could not advance past the five.

The Bulldogs punt was blocked by the Leopards and Mobile Christian’s Judd Duke recovered in the end zone for the game’s first score.

Now down 7-0, the Bulldogs took over with its best starting field position of the day at its own 44-yard line. The Bulldogs had its longest play up to that point with a 21 yard pass to running back Jahzarian Lampley. However, it came on a second and 26. The Bulldogs could not convert on third down and punted the ball away again.

The Leopards then put together their best drive of the game, using two screen passes that turned into long gains to get inside the red zone. The drive ended with a one yard touchdown run by Andres Fox to put the Leopards up 14-0 with 1:33 left in the first half.

Pike County quickly got the ball moving with a 35 yard connection between Wilson and wide receiver Rayshawn Reynolds. A holding call killed the drive, however, and the two teams went into the locker room for halftime.

Through two quarters, Mobile Christian held a 115-76 advantage in total yards in a defensive first half. Neither team could move the ball on the ground with 39 rushing yards between the two.

Pike County opened the second half with the football and were able to pick up a first down before Wilson threw an interception.

Mobile Christian took over and marched down the field. Pike County defensive back Kevon Harris ended the drive by picking off Moore’s pass in the end zone and returning it out to the 16-yard line.

The Bulldogs could not turn the turnover into points and were forced to punt after three plays. Pike County linebacker Jeremiah Foster gave the Bulldogs another chance by intercepting Moore’s third down pass.

Pike County was once again unable to capitalize and punted the ball back to Mobile Christian. On the Leopards’ first play, Moore quickly made amends for his interceptions with a 79 yard touchdown pass to wide receiver Keith Gallmon. The score put Mobile Christian up 21-0 late in the third quarter.

In Pike County’s first possession of the final quarter, the Bulldogs were able to move the ball before Wilson threw his second interception of the game.

Mobile Christian was able to chew several minutes off the clock behind the running of running back Nick Ellis but was forced to punt midway through the fourth quarter.

The Bulldogs ensuing drive yielded very little and had to punt the ball away. The Leopards, however, fumbled the ball back to Pike County and their second play of the drive.

Pike County only went backwards and failed to pick up a fourth and 24 to give the ball back to Mobile Christian.

The Leopards ran the remaining time off the clock and advanced to the second round of the playoffs.

“We got outplayed. They made some plays and we failed to do that,” Pike County head coach Fred Holland said after the game. “I’m really proud of our kids for what they did this season. It was a good season for our seniors.”