CHHS student ‘reaches for the stars’ 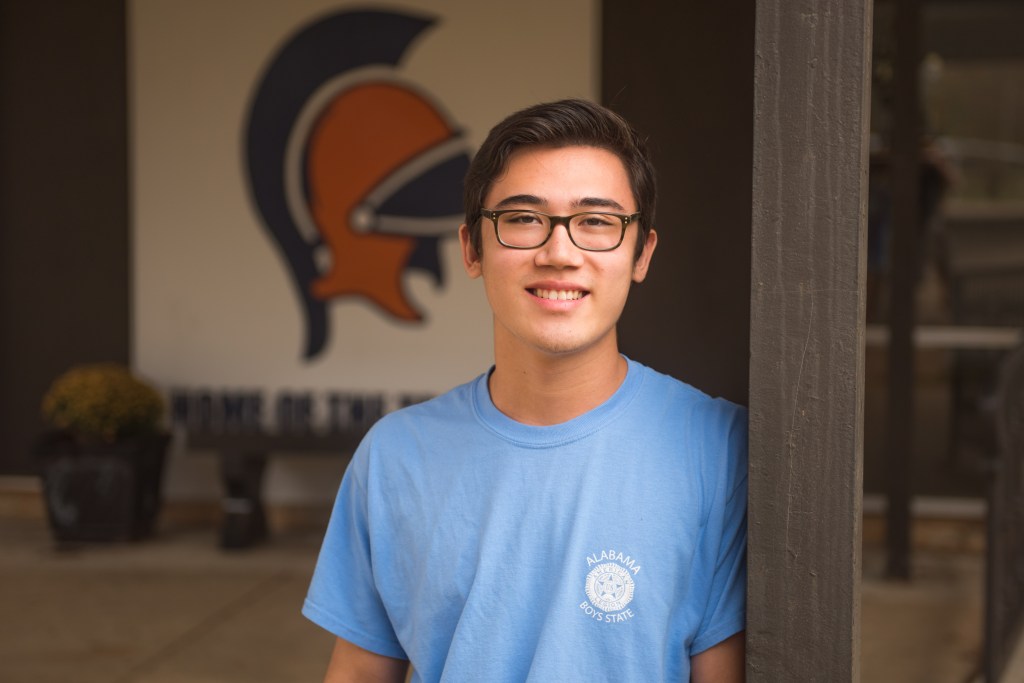 Messenger photo/Jonah Enfinger Charles Henderson High School senior Orion Nokes, left, doesn’t believe the sky is the limit; he’s reaching for the stars and encouraging others to do the same. Nokes participates in public speaking competitions with the FBLA club, where he has placed in the top 10 nationally twice and won the state competition as a freshman.

“Society tells us the sky is the limit, but there is a problem with this,” Orion Nokes told the crowd gathered at the national FBLA public speaking competition in Anaheim this summer. “Society is setting a boundary for all this great talent. It’s time for us to break past the atmosphere and reach for the stars, and grab as many as you can until you create the great constellation you were meant to be.”

That quote was the final punch of a speech that won Nokes a ninth place finish in the national competition.

The success was not new to Nokes, who had finished sixth nationally the previous year and took first place at the state competition for his first speech while a freshman at Charles Henderson High School.

“Nothing about me screamed public speaking other than my voice,” Nokes said. “They just suggested me because I was known as a good student.”

Although Nokes has now gotten on stage and spoken to large crowds numerous times, he said he’s still a bit of an introvert and always nervous about speaking.

“It took a lot of practice so I wouldn’t choke up. Even for just a class presentation for a bunch of people I’ve known for all 12 years of grade school, I still get nervous.”

Nokes described one great experience where his speaking was able to touch someone’s life in an unexpected way.

““In Anaheim this last summer, I watched a person from Alabama get first place for her public service announcement and she gave me a hug afterward and said I was her inspiration,” Nokes said. “She had placed third in state competition and said she would not have come if I had not placed nationally after getting third in the state.”

After winning the great honor of first place in state his freshman year, Nokes has not won another state title. However, both ears he failed to earn the top spot in the state, he placed higher in national competition than the others from Alabama who had placed higher than he did on the state level.

“Of course, we thought he should have gotten first in state the past two years,” Sanders said.

Nokes said the greatest thing he has gotten out of his experiences competing is to take every opportunity that comes his way.

“Before I got first in the state, it was not something I was expecting to go far with,” Nokes said. “It was just another opportunity for me to do. I remember telling Mrs. Sanders I wasn’t even that excited that I got into finals because I didn’t think I was going to place; I was doubting myself. When I got first place, I realized that was something that I could do. It has opened up so many doors. I’ve learned to take basically any opportunity that is offered to me.”

One of those opportunities was a chance to participate in the Mercy College Leadership program, where Nokes was invited based on his public speaking success and qualified in the top 200 of 2,000 applicants. When he got there, he was offered the highest scholarship possible while also learning more about the business world.

Nokes is still figuring out what path he will take once he graduates from high school, but he knows his public speaking experience will be a benefit to him no matter what business or profession he eventually goes into.

“My goal is to eventually become an entrepreneur,” Nokes said. “I’m going to start off in college trying to work in companies learning about how business works… At Mercy College I learned about the corporate world and that success is 5 percent academic skill and 60 percent the way that you communicate. If you can’t communicate very well, you can’t climb the ranks of society or a corporation. Even if I don’t go into business public speaking is in every single job that there is. I’ll be able to use that to further myself into any occupation that I choose.”

Whatever path he goes on, Nokes said he is determined to be successful.

“As I wrote on one of my essays, I basically haven’t allowed people to define my path and define my success,” Nokes said. “I no longer hear ‘No you can’t.’ I hear ‘Try harder.’ That kind of encompasses the way that I think.”

And with that kind of thinking, not even the sky is the limit.

Editor’s note: “Bright Futures” is an education feature of the Troy Messenger that highlights local students that are going above and beyond in their educational journeys.