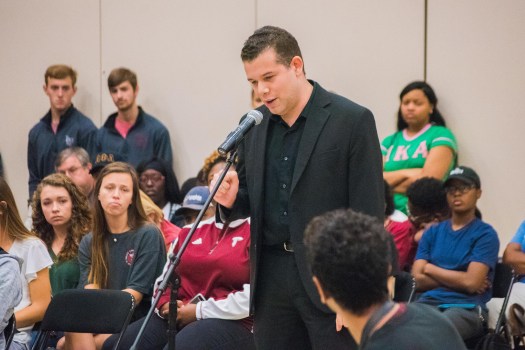 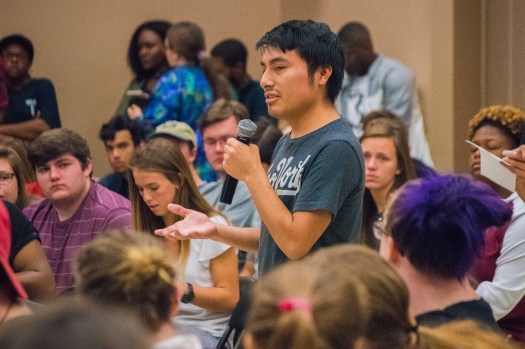 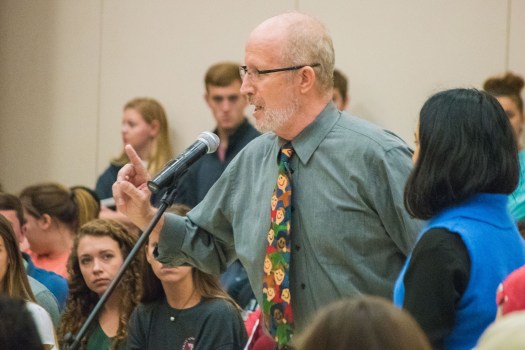 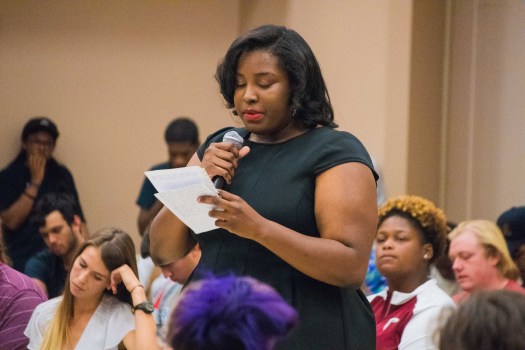 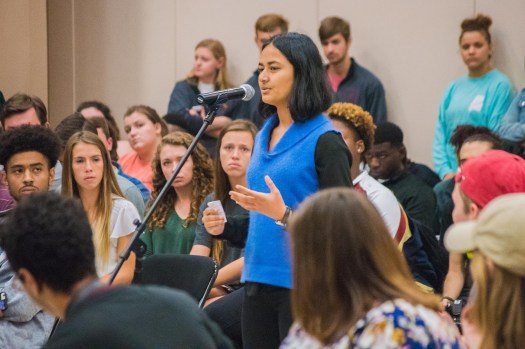 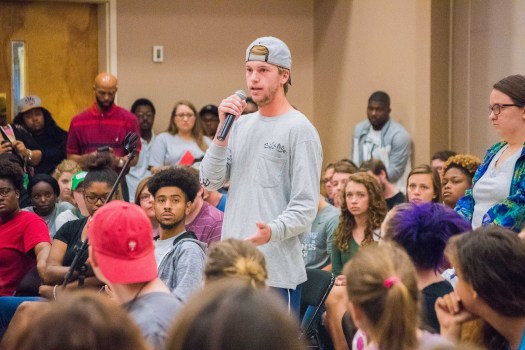 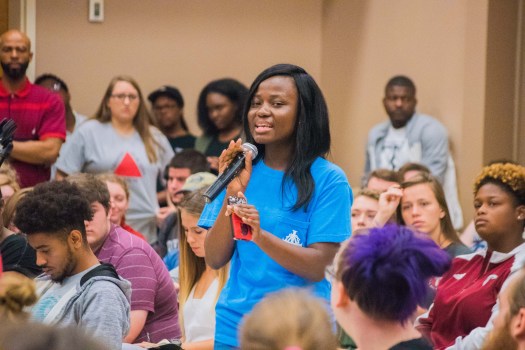 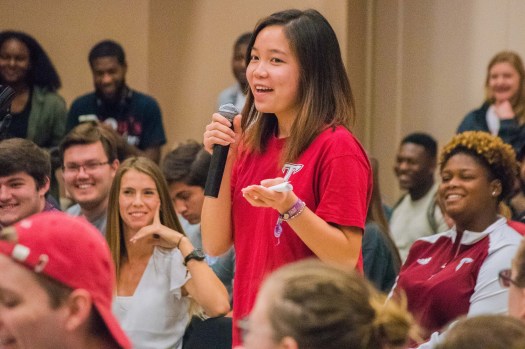 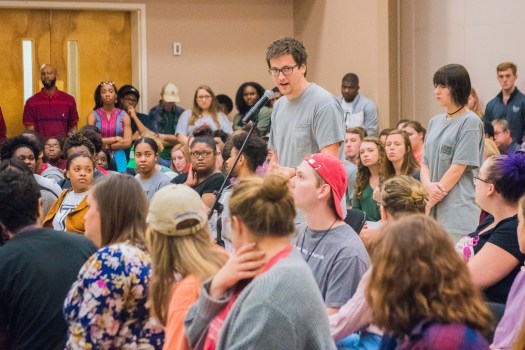 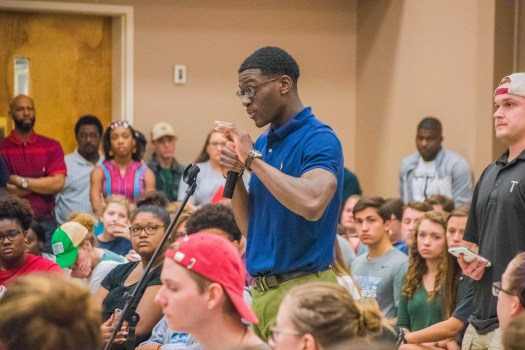 “The boys torture the frog in jest, but the frog suffers in earnest.”

McCall, who serves as the advisor to Troy’s International Student Cultural Organization (ISCO), was one of many people to make remarks at a town hall meeting Friday regarding the video, its effects on other students and what action the university should take in the matter. Nearly 200 students packed the Trojan Center ballrooms to participate in the forum facilitated by the SGA. Herbert Reeves, dean of student services was also in attendance.

The video, which became the center of news reports this week, shows a member donning a Donald Trump mask and Make America Great Again hat with two other FarmHouse members dressed as border patrol agents chasing a student dressed as a Mexican immigrant. The caption reads “When you ask them to build the wall.” Another video showing the “agents” returning with the “immigrant” in custody has a caption that reads “Got him.”

Several international students spoke out about the incident.

The students involved in the incident did not attend the town hall meeting, as SGA President Ashlii Morris said they have received death threats in the days following the video’s release. FarmHouse did, however, issue an apology to the university via a statement.

“We sincerely apologize for the actions that occurred during an event at the fraternity house on October 31,” the fraternity said in the statement. “These actions fall well short of the standards we expect of our members, and the individuals responsible will face appropriate disciplinary action.

“We deeply regret the hurt caused to members of our Troy community, and we are working closely with University officials to ensure something like this does not happen again. We will learn from this and take steps to regain the trust of the University and community.”

Nathaniel Rodriguez, a U.S. citizen from Puerto Rico, said he may not be an immigrant, but said he knows what they go through and it’s “not a joke.”

“I’ve grown up knowing undocumented immigrants and I know Dreamers and I’ve studied these people and what they go through to get here and to stay here,” Rodriguez said. “Kids started coming to the U.S. in droves because of gang violence and human trafficking. Sometimes they are killed, beaten, raped and left to die in the desert. This is not a joke to the people that have to live in this reality. For them to dress up like that as a caricature of a Mexican or Central American is degrading and mocks the struggle that these people go through.

“So I do not accept their apology. If you’re sorry prove it. If you don’t represent the values of the president that did this, prove it. This is a FarmHouse problem right now; whether it becomes a Troy University problem depends on how it is handled.”

A student from Honduras who did not identify himself said he doesn’t necessarily want the whole fraternity to be disciplined, but he does want action taken against the members involved in the incident.

“I don’t think everyone in FarmHouse is racist,” the student said. “I don’t think FarmHouse should be in trouble, but I’d like to see something happen to those involved. If I would have known it was like this at Troy, I wouldn’t have come here.”

Many other students expressed shame in the incident happening at their university, and some took the opportunity to discuss broader issues of concern.

“I was so proud to say I went to Troy University before this incident,” Banks said. “I love my school so much and am so proud to go to the international university. I have so many international friends and know so much more about their cultures because I came here.

“This incident breaks my heart. The first time I saw it, I was in shock; things like this don’t happen at Troy University. I love this university so much and wanted to be a part of this culture that now has gotten so twisted.”

“The issue on our campus is that we’re an international university that’s on George Wallace Drive and we have a building named after high member of the Ku Klux Klan in the center of university,” said Matt Fulton. “And it’s also a university that has the opportunity to run the Rosa Parks museum. We’re a contradiction. I say ‘Oh but we’re not like that; Troy is an international school’ – I don’t know if we can still say this. I want to see the administration support changing the names of buildings that were names of people that were racists that don’t support the values of Troy University and show we truly support diversity.”

Jenna Oden, who identified herself as a “proud FarmHouse girlfriend,” said she was at the party and pleaded for forgiveness for the students involved.

“I hate all the immigration crap that is going on,” Oden said. “I went up and told (one of the students) that ‘Hey, this is racist and you shouldn’t be doing this.’

“The problem is all the hatred. I’m on the other side listening to attacks and hate; these guys are getting death threats. Let’s show love; they also need getting love. I honestly believe, as much as we want to punch them in the face … let’s show them love and show them it’s wrong. I just want you to love them. Love is going to change this problem and change their minds.”

Will Walker, president of the Troy Sigma Chi chapter, apologized on behalf of the Greek community.

“I wanted to speak for the Greek community and really say that I’m sorry,” Walker said. “I’m not here to defend it, and not just for this incident, but any incidents that have happened. I did feel like someone needed to say that. I feel committed to a change. I don’t know how to change people’s beliefs, but I’m committed to a change.”

Besides reactions and descriptions of how the incident affected them, the town hall also called on the students to provide ways that the university might be able to solve the issue.

“We hate (people) because we don’t know them,” said Pratiksha Joshi of Nepal. “I challenge you to love instead. Every Friday, a group of friends and I write love letters to people all over campus trying to tell people they matter and are special and are loved. I ask everyone in this room to join me and write letters with us, to help people feel that they matter in this world no matter what happens.”

Both American students  and international students challenged other to interact with people of different races and nationalities through the organizations and programs offered at the university.

“If you see someone different than you, befriend them and talk to them,” said Caroline Hughes, ISCO president. “(Professor Joseph) McCall always says ‘If I get to know you, I’m going to love you.’ We need to cultivate that kind of love. It’s really hard to hate someone when you get to know them. The way we do that is to break that boundary. I feel like if we can just get over that initial fear of what we don’t understand, that’s how we make a difference.”

Katie Curington said white people need to be unafraid to stand up for minorities.

“If you watched that video and felt no anger you’re part of the problem,” Curington said. “I’m not an immigrant, but that doesn’t mean I can’t make a change. Some white people need to stand up for their friends, because some white people will only listen to other white people.”

The town hall lasted about an hour and a hand, and at the end SGA officials said the situation remains fluid.

“As your representative, I needed to hear your voices and hear your stories,” Morris said. “I thank you sincerely for being here and sharing what is on your heart and mind right now.”

Morris did not give a timeline for when to expect disciplinary action to be taken.

No members of the administration spoke at the event, but the university released the following statement Thursday regarding the incident:

“The Dean of Student Services and the Office of Student Involvement immediately began an investigation, and the national Farmhouse Fraternity organization has been notified. Troy University does not condone the actions and images depicted in the video. Troy University’s student population is one of the most diverse and international in the state of Alabama, and Troy is committed to the cultivation of a positive, inclusive environment.”

Chris Wiggins, CEO of the FarmHouse International Fraternity, also released a statement Thursday regarding the situation.

“FarmHouse International Fraternity received a report regarding inappropriate behavior by four undergraduate members of the chapter at Troy University,” Wiggins said in the statement. “We are disturbed by news that those members wore insensitive costumes and performed an offensive skit. This behavior is not consistent with FarmHouse principles, and we are coordinating with the University and chapter to further investigate these concerns.

“Farmhouse at Troy is a diverse organization, and the men pride themselves on bringing individuals together from all different backgrounds. We will not tolerate discrimination in any form and, once the investigation is complete, will ensure that members involved are held accountable through our conduct process.”