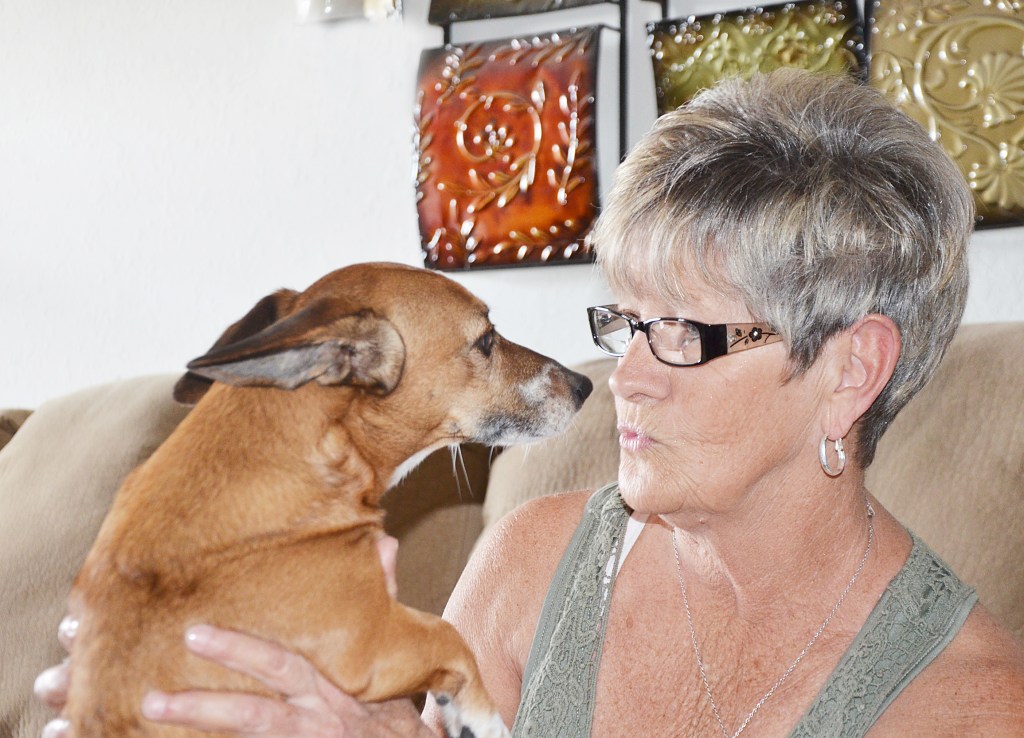 Dora Grissett gives her favorite pup Sugar some love at her home on Thursday. Sugar is the winner of the latest Pet Photo Contest, landing the front cover of the annual calendar while helping raise money for the Humane Society of Pike County.

Even though her photo is front and center on the Humane Society of Pike County’s 2018 Pet Photo Calendar, Sugar is not barking up any trees.

The dachshund corgi “daughter” of Dora Grissett of Troy won the pets-tigious photo contest with 1,723 votes in a down-to-the-wire finish.

“I had not had a dog in 45 years and had not thought about getting one,” Grissett said. “But on Christmas Day 2013, my granddaughter, Jaden Singleton, brought a puppy named Biscuit to me and said, ‘You need her.’ I didn’t know then, how much I did need that puppy.”

For Grissett, it was puppy love at first sight. But, she didn’t think the name Biscuit fit that sweet-faced sausage dog.

Their friendship grew closer and closer, almost like a mother and daughter, “if you can understand that.”

The idea of entering Sugar in the 2018 Pet Photo Contest was a passing thought for Grissett, then one day, she thought, ‘why not go for it?’ and she did.

“I didn’t enter Sugar with any thoughts of her winning,” Grissett said. “I just hoped she would get enough votes to be on one of the featured pages.”

Grissett became Sugar’s campaign manager and began asking family and friends to “Vote for Sugar!” Being on the campaign trail was fun and exciting and the positive response to Sugar’s “platform” was encouraging.”

Votes for Sugar began coming in and in large numbers. Grissett started to believe that her Sugar had a chance.

She got caught up in the campaign and really began to pound the pavement.

“It was fun for me but Sugar was happy at home playing ball and with all of her other toys,” Grissett said. “She didn’t know she had a chance to win the Pet Photo Contest.”

On the final day to vote in the 2018 Pet Photo Contest, Grissett gathered up the one-dollar votes she has been saving for that last minute push. When she counted the money, she was shock that she had squirreled away $808 for last minute voting.

“But, when I went to Troy Antiques to put the money in for Sugar, the shop was closed,” Grissett said. “I didn’t know what to do. Then, I remembered that votes could be cast at Hillside Antiques. It was getting near the 5 p.m. deadline and it seemed like I got every red light in Troy but I made it and cast those votes for Sugar.”

When the votes were tallied, Sugar was the winner in a photo finish with Allan and Kendra’s dog Lou.

“I was happy that Sugar won but I didn’t enter thinking she would win,” Grissett said. “I’m just proud that we are a part of the fundraising efforts to reduce the number of abandoned and abused dogs and cats in Pike County.”