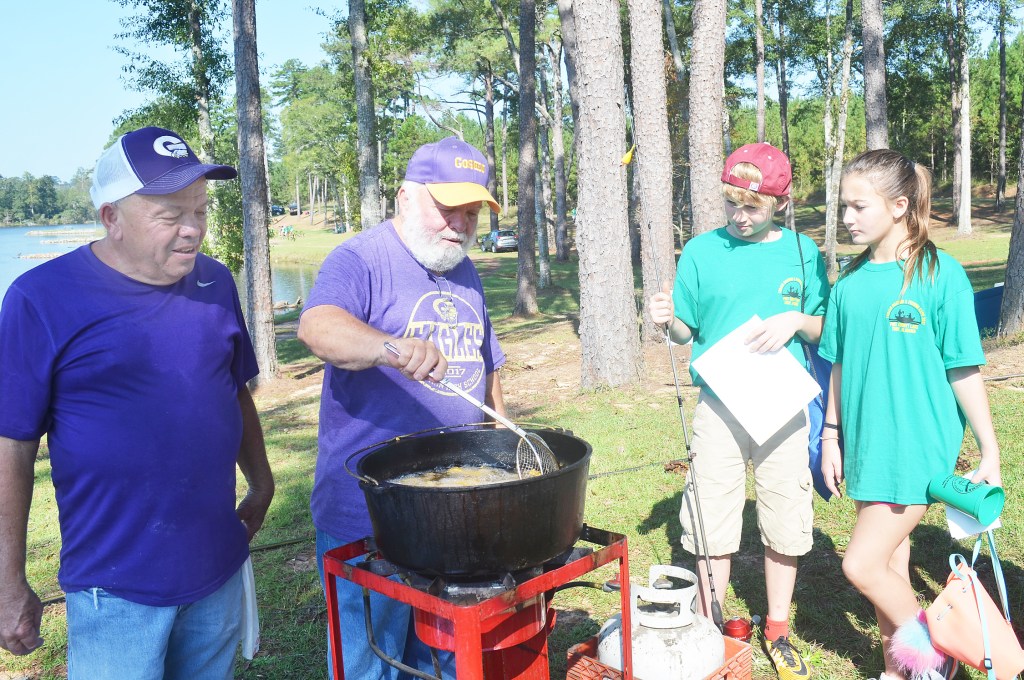 Brothers Danny and Carroll Rhodes bleed purple and gold and, if anything is going on in the Goshen community, they are right in the middle of it. And, they are just as willing to be involved in activities outside of the Goshen Town Limits. When they were asked to fry fish for Troy Elementary School Fishing Day, they said, How many?”

The names Danny Rhodes and Carroll Rhodes are synonymous with “Good Neighbors.”

When the Goshen brothers aren’t fishing and hunting, they are out in the community doing good things for their neighbors.

“Danny and Carroll help out any way they can,” said Keith Snyder who has been knowing the Rhodes brothers long enough to appreciate them – and tease them a bit.

The brothers cook hamburgers for the basketball and softball teams and “help out” with the cooking camp stew for the volleyball team.

“We tell them they are always in the way,” Snyder said, laughing. “And, that the food is good until they cook it. Danny and Carroll are always around doing good things for our community.”

And the Goshen community probably loves Danny and Carroll as much as the brothers love their neighbors.

“That’s just the way we were raised,” Danny Rhodes said as he and his brother were driving to Birmingham to see the Goshen volleyball team compete in the state championship game Thursday.

The brothers are graduates of Goshen High School and proudly admit they bleed purple and gold.

Around and beyond Goshen, the brothers are famous for their camp stew, which they make for friends and neighbors.

“We don’t take credit for how good the camp stew is,” Danny Rhodes said. “Roy Shaver and Earl Folmar showed us how they do it. There’s not a special recipe. You just have to go step-by-step. You have to stir it constantly to keep it from scorching. If you do, it will turn out good. If you don’t, it won’t.”

Randy Hale, Pike County Farm-City chairman, said the Rhodes brothers give unselfishly of themselves to individuals, to their community and to all Pike County.

“Danny and Carroll are true community servants,” he said. “The word ‘no’ is not in the their vocabulary.”

When they were asked to fry fish for the Troy Elementary School Fishing Day at Pike County Lake in October, they didn’t hesitate. They cooked and they had a good time doing it.

“Good” is a word that fits the Rhodes brothers to a tee.

“Our mama got a little Social Security and, like a lot of women back then, worked in the shirt factory,” Danny said. “She continued teaching us to always treat others the way we would like to be treated and to always do as good as we could. We were raised well by our parents and our sister. Annette still checks on us every night.”

The Rhodes brothers are retired from the Alabama Highway Department, Carroll after 36 years and Danny after 25.

“We’re slowing down a little,” he said. “We make a little time to go fishing and hunting and, if something’s going on in Goshen, we want to be in the middle of it.”