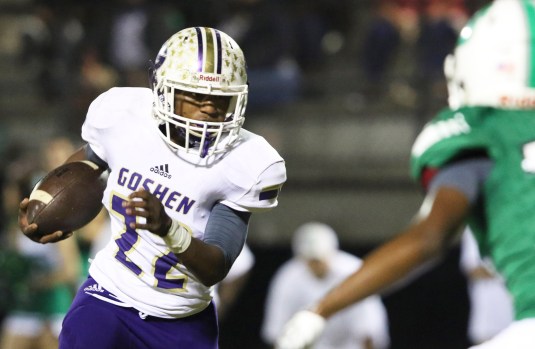 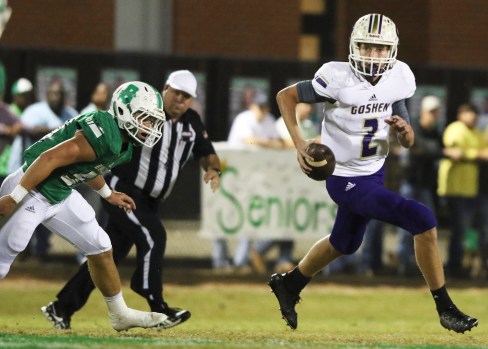 BRANTLEY – As “Don’t Stop Believing,” pulsated from the PA system at Brantley High Friday night, its sounds drifting over the field, over the Goshen Eagle players on one knee with their eyes fixed on head coach Bart Snyder for his postgame speech, over the remaining fans and over the scoreboard that read Goshen 28, Brantley 7, it became apparent that this could be a song that sums up the spirit of a very special Goshen High School football program.

With the win, Goshen, 9-1 and ranked No. 3 in Class 2A, wins the Region 3 championship over Luverne and Elba to break a three-way-tie, and the Eagles will host the first round of the AHSAA playoffs next Friday against Southern Choctaw.

“We won this season 9-1, now we start a whole new season,” said Snyder. “That’s what we have got to start working for. We cannot be content. The teams you play now, you’ve weeded out all the others, it’s these teams here now that are here to play, and they are good.”

Brantley, entering the game ranked No. 7 in Class 1A, scored on its first possession of the game when on the first offensive play Parker Driggers exploded off the right end for an 85-yard touchdown carry, Bruce Dunn kicked the extra point, and the Bulldogs led 7-0.

Goshen tied the game 7-7 late in the first quarter as running back Zack Alford broke a 37-yard run on fourth-and-two for a touchdown, with Dawson Hamlin kicking the extra point.

On the first play of the second quarter Caleb Dawson took a handoff from Alford, with Dawson churning 10 yards for the touchdown, Hamlin kicked, and Goshen led 14-7.

The Eagles went up 21-7 on an 8-yard touchdown carry by Alford, and Hamlin was good again, still in the first half.

Brantley worked their way down to the Goshen 13 yard line in the final seconds of the first half, and on a field goal attempt, the kick was blocked by Damion Passmore, Devin Bell recovered the ball at the 17 and raced 83 yards for a touchdown, and a 28-7 halftime lead.

Goshen’s defense was dominating throughout the contest, including the second half, securing the 28-7 win.

The Eagles were led in rushing by Alford with 74 yards on 11 carries, Snyder gained 56 yards on 12 carries, while Passmore picked up 29 yards on 12 attempts.

Snyder also completed three passes for 44 yards on the evening.

Coach Snyder was proud of his team finishing the season 9-1 and winning the region against a brutal schedule.

“It’s great, first of all to be able to come out and enjoy this,” said Snyder. “We’ve worked hard all season to get to this point. We took a loss to Elba, in a game we felt like we could have won. Most teams could have said, it’s done, we are going to miss our goal. But we kept putting and kept going, and finally things fall into place and we got it the old fashioned way. We won it on the field. We played great teams like Pike County and Brantley that were out of region games, Ariton out of region, those are three teams that had 24 wins. That says a lot. You’ve got Luverne, Elba and us ranked in the top ten. You’ve got Ariton and Pike County right up there too. I’m extremely excited about our guys and what they have done, and how they have stayed focused. They stayed poised to win this region championship since I don’t know when.”