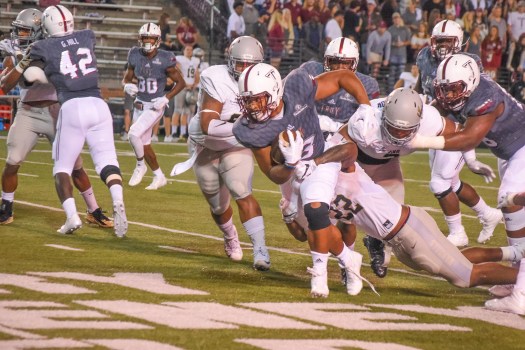 Photo/Jonah Enfinger Troy running back Josh Anderson (33) runs the ball for the Troy Trojans during their 24-21 win over the Idaho Vandals on Thursday evening. 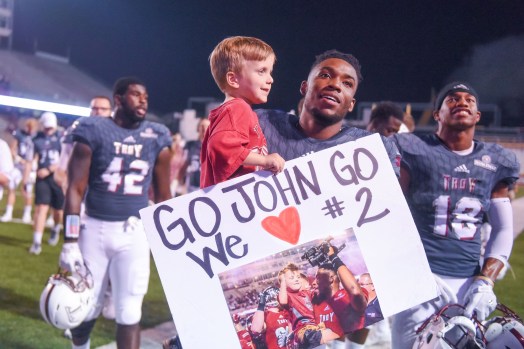 Fresh off earning bowl eligibility for the second consecutive season, the Troy Trojans hosted the Idaho Vandals in a late-night Thursday game in Veterans Memorial Stadium and took down the visitors 24-21 on national television.

The game also matched up the Sun Belt’s leading rusher in Idaho’s Aaron Duckworth and the nation’s 11th ranked rush defense in Troy.

The Trojan offense then took over for the first time and did so with running back Jordan Chunn. In his first action since the loss against South Alabama on October 11th, Chunn ran the ball three times on the opening drive for 13 yards. Troy was able to reach midfield but had to put the ball in the hands of punter Tyler Sumpter who pinned Idaho at the 15-yard line.

A slow start to the game quickly changed when Idaho lined up to punt from its own 22 yard line. The snap sailed over the head of Coffey who was able to recover and get the punt away.

Troy took over in Idaho territory but failed to take advantage. Idaho defensive lineman Aikeem Coleman sacked Silvers on the first play of the drive, forcing a fumble that was recovered by the Vandals.

Idaho wasted no time with the opportunity as Linehan hit wide receiver Alfonso Onunwor for a 29 yard gain. A few plays later and Linehan found Onunwor once again but this time in the end zone for a seven yard touchdown. Onunwor had three catches on the five play drive and five receptions in the first quarter ended.

Troy took over and quickly moved into Vandal territory as the second quarter began behind a pair of chunk runs by Chunn and running back Josh Anderson. Troy found its way into the red zone for the first time but a third down pass to the end zone landed in the hands of Idaho linebacker Ed Hall.

After moving up to the 35-yard line, Idaho was forced to punt. Once again, the snap went over the head of the punter but Coffey was able to recover and get the punt away yet again.

The Trojans set up shop at its own 41-yard line and embarked on its first scoring drive of the game. Troy reached the red zone when Silvers found wide receiver John Johnson for a 20 yard gain. Chunn then ripped off a 16 yard touchdown run to put Troy on the board and tie the game at seven with 6:01 remaining in the half.

The touchdown pulled Chunn to within four of tying the Sun Belt record for most career rushing touchdowns.

Troy forced Idaho into another punt and began its drive at its own 27. A long 14 play drive milked the remaining two and a half minutes of the half off the clock and ended with a 40 yard field goal by Tyler Sumpter to put Troy up 10-7 at the half.

Troy opened the second half with a long 65 yard drive that culminated in a 14 yard touchdown pass from Silvers to wide receiver Tevaris McCormick to put Troy up 17-7.

The Trojans lived on the ground during the drive with Chunn picking up 18 yards on three carries. Running back Jamarius Henderson also added a 26 yard run on the drive.

Idaho’s next drive stalled in Troy territory and the Vandals turned the ball over on downs. Troy took over but had to punt the ball away from midfield.

Idaho again drove across the 50-yard line but failed to pick up a first down on fourth and two, giving the ball back to Troy.

The third quarter came to end shortly after the Trojans retook possession. During the quarter, Chunn went over 100 rushing yards for the ninth time in his career.

Troy was forced to punt early in the fourth quarter and Idaho took over at its own nine yard line when a penalty on the punt return set it back.

The Vandals made up ground, however, with a 45 yard pass down the middle to tight end/linebacker Kaden Ellis. Shortly after, Linehan found wide receiver Jacob Sannon in the corner of the end zone for a touchdown to pull within three.

Troy needed a response after several fruitless drives and a 47 yard strike down the left side to wide receiver Damion Willis helped put the Trojans in the red zone.

Sumpter came onto the field to attempt the field goal but a penalty gave Troy five yards and set up a fourth and one. Troy head coach Neal Brown then elected to go for it and converted with a quarterback sneak.

Chunn then slashed the defense up the middle for seven yards and six points to put Troy up by two possessions with 4:12 remaining in the game.

Chunn had 113 rushing yards on 18 attempts. His two touchdowns puts him in a tie for the school record of 45 career touchdowns.

Silvers had 212 passing yards to nine different receivers on the night.

Idaho responded by marching down the field with a mixture of runs and passes and made its way into the red zone for the second time on the night.

Linehan then threw a 98 yard pick six but the play was reversed upon review. Linehan was injured on the play and Idaho head coach Paul Petrino’s son Mason Petrino stepped in.

Linehan’s play left a good impression on Brown who had praised his play following the game.

“That quarterback is a stud,” Brown said during the postgame press conference. “He is a man. He played well and competed. He threw some balls into tight windows.”

Linehan finished the game with 282 passing yards and two touchdowns. His top target Onunwor had 111 yards on nine catches.

On the first play with Petrino at the helm, he was hit by defensive lineman Seth Calloway after the pass. Calloway was called for roughing the passer and ejected for targeting.

Petrino then hit wide receiver David Ungerer from six yards out to cut the Troy lead down to three. The ensuing onside kick was recovered by Troy and the Trojans escaped the 24-21 victory.

“I appreciate our fans, I know these midweek games are a burden from a time perspective,” said Brown. “The national exposure that we get as a university you can’t put a dollar figure on.”

Troy will hit the road next Saturday and pay the Coastal Carolina Chanticleers a visit. The game is scheduled for a 3:30 kick off and will be broadcasted on ESPN3.