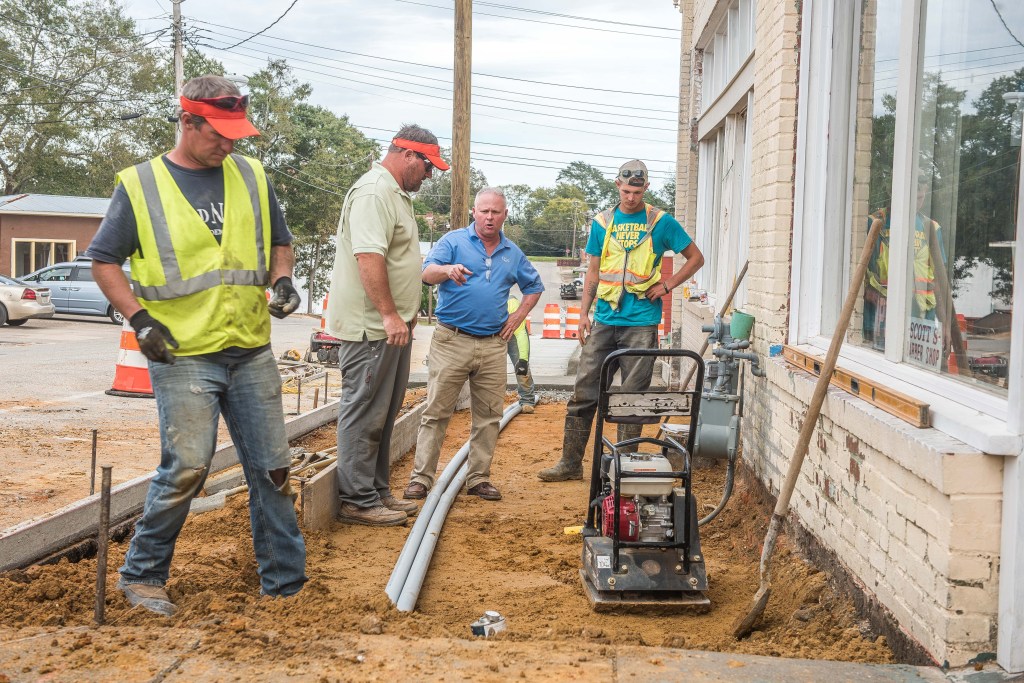 Construction workers work to replace a portion of sidewalk on Love Street Wednesday as part of a Transportation Alternatives Program (TAP) grant project to renovate several portions of sidewalks downtown. The project is one of three TAP grants currently in the works as part of the Downtown Plan to renovate the district for aesthetic and safety purposes.

The first in a series of projects to revitalize the downtown district is currently underway.

“Work has already been done on Church and Oak streets and they are currently working on Love Street,” said Melissa Sanders, planning administrator. “They will also be working on crosswalks at the intersection of Church and Oak and sidewalks on a block of Three Notch from Elm to Walnut and the first block of Walnut from Elm.”

Sanders said this particular project hits many portions of sidewalks one block out from the main square and extends similar pedestrian-level lighting outward.

“One of the reasons we’re using these types of lights is to connect this as a walkable area,” Sanders said.

The 2015 TAP grant isn’t going to downtown revitalization – it is being used to construct sidewalks along the new roads John H. Witherington Drive and Trojan Parkway. But the 2016 and 2017 grants are also incorporated into the downtown plan.

The 2016 grant will provide for a mutli-use path from Troy University to the Square to provide an easy way for bikers and other pedestrians to reach the district from the campus without having to get in a vehicle.

The 2017 grant will come back to sidewalk replacement in the areas surrounding the Square and “image corridors” into the area.

The 2016 grant is still in engineering and the 2017 grant has only just been awarded. Sanders said those projects are still a considerable time away from going into construction.