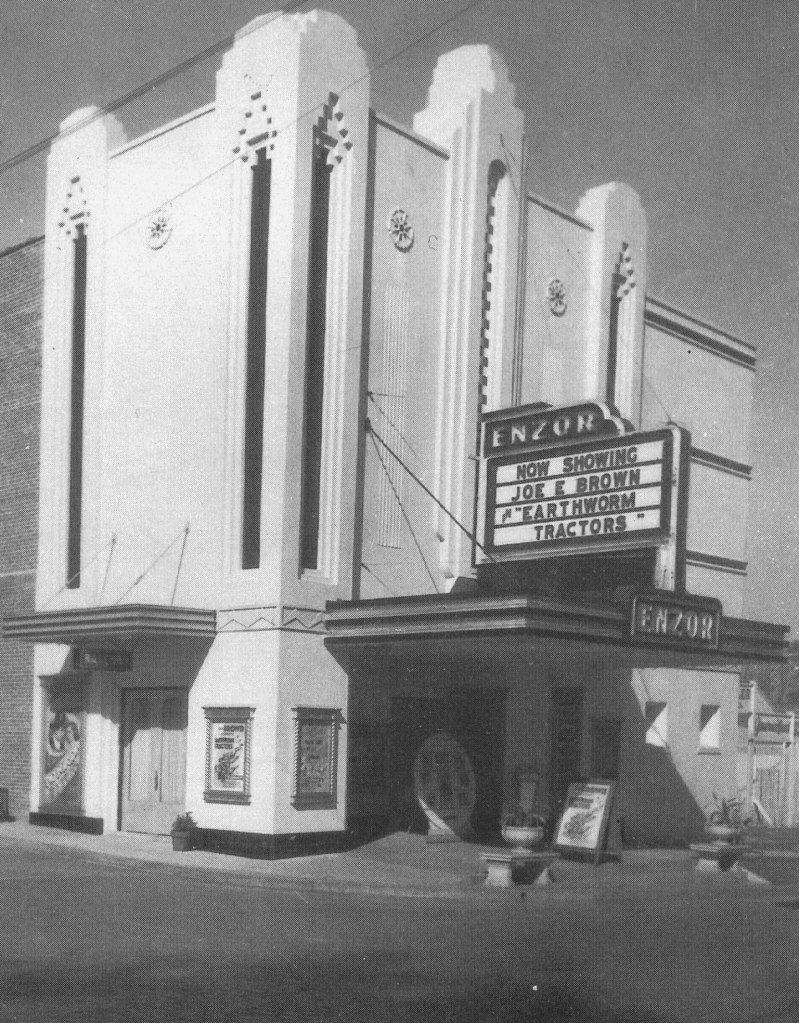 The Enzor Theater was once a prime location for children and adults alike to relax by seeing a “picture show.” The theater sat on Three Notch Street not far from the downtown square.

Ask Windley Wade Tatom about the best of times and would say, without a doubt, that those were the days of his childhood in Troy, Alabama.

Tatom is somewhat of a history buff, or perhaps it’s just that he has a bad case of nostalgia. He enjoys looking back and reminiscing about the “good ol’ days.”

Many of his favorite memories center around the “picture show.”

“Troy had two picture shows,” he said on his walk down memory lane. “The Princess Theater was Troy’s original theater. It was located in the building that is now Synco Drugs. It closed around 1941, so I never got to see it during its grandeur, but I wish I had.”

Tatom said the Princess Theater was a showplace, a castle-type theater with huge drapes hanging over the walls – “just fantastic.” Herman Moll, who later became the band director at the Troy high school, played violin for the silent movies at The Princess.

Just one block away, in the former Troy Public Library, was the Enzor Theater that was just as grand as the Princess, but in a different way.

“The Enzor was a fascinating place, with clouds painted on the high ceiling and there were little lights that twinkled like stars,” Tatom said. “And, I don’t know how it was done, but the clouds appeared to be moving. It was so amazing. If you got bored with the picture show, you could watch the ceiling.

Once inside the theater, a quarter was all a youngster needed for a ticket to the picture show and “refreshments.”
“A ticket to the picture show was 10 cents for kids under 12 and 37 cents for adults,” Tatom said. “Popcorn and everything else, except Gold Tip Chewing Gum and almond candy, was a nickel. One Saturday, my uncle was at the barbershop and he gave me 50 cents. That was more money than I’d ever had. I paid my way in to the picture show, got popcorn and ate the first Snicker candy bar I’d ever seen or had. It was so good that I spent every nickel I had on Snicker candy bars – ate seven Snickers and didn’t even get sick. Still love Snickers today.”

The first dispensing drink machine Tatom ever saw was at the Enzor Theater and it was dispensed in a Dixie cup.

Tatom said the Enzor was a great place and all school children looked forward to “movie day.”

“Everybody from the elementary school to the high school got to go to the movie day,” Tatom said. “One manager, Eddie Tomblin, had a little girl about nine years old. He would put her on stage to ballet dance. We would shoot her with our BB slingshots. We should have been put in jail.”

The Enzor had a coal chute in the basement and kids would crawl in the chute and come out in the theater like a snake.

“All during the picture show, you would see new heads pop up at the front of the theater and you’d know that some kid had come down the chute,” Tatom said. “The Enzor Theater was a fascinating place and I wouldn’t trade my Saturdays there for most anything.”