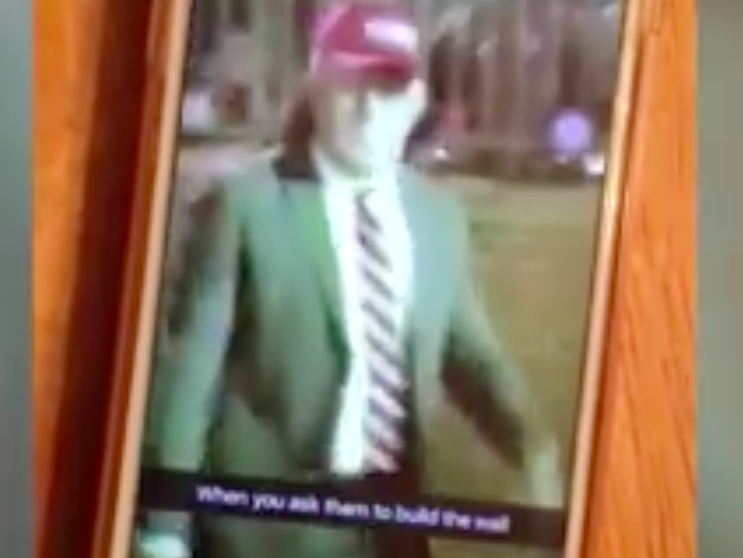 A Snapchat video recorded Tuesday at a Farmhouse Fraternity Halloween party shows a man dressed as Donald Trump and chasing an "immigrant."

The Troy University chapter of the Farmhouse fraternity is under investigation after a member reportedly donned a Donald Trump mask at a Halloween party and chased another student dressed as a Mexican immigrant.

University officials were made aware Wednesday of footage taken of the incident on Snapchat.

The video shows a man in a Trump mask and “Make America Great Again” hat and two other students dressed as border patrol agents chasing a student dressed in a sombrero and colorful poncho over a wall. The caption reads “When you ask them to build the wall.” Another video shows the “agents” returning with the “immigrant” in custody with the caption “Got him” as someone shouts out “pesos accepted, pesos accepted.”

“The Dean of Student Services and the Office of Student Involvement immediately began an investigation, and the national Farmhouse Fraternity organization has been notified,” Troy university released in a statement Thursday. “Troy University does not condone the actions and images depicted in the video. Troy University’s student population is one of the most diverse and international in the state of Alabama, and TROY is committed to the cultivation of a positive, inclusive environment.”

“We sincerely apologize for the actions that occurred during an event at the fraternity house on Oct. 31. These actions fall well short of the standards we expect of our members, and the individuals responsible will face appropriate disciplinary action.

“We deeply regret the hurt caused to members of our Troy community, and we are working closely with University officials to ensure something like this does not happen again. We will learn from this and take steps to regain the trust of the University and community.”

“Earlier today, FarmHouse International Fraternity received a report regarding inappropriate behavior by four undergraduate members of the chapter at Troy University,” Wiggins said in the statement. “We are disturbed by news that those members wore insensitive costumes and performed an offensive skit. This behavior is not consistent with FarmHouse principles, and we are coordinating with the University and chapter to further investigate these concerns.

“Farmhouse at Troy is a diverse organization, and the men pride themselves on bringing individuals together from all different backgrounds. We will not tolerate discrimination in any form and, once the investigation is complete, will ensure that members involved are held accountable through our conduct process.”