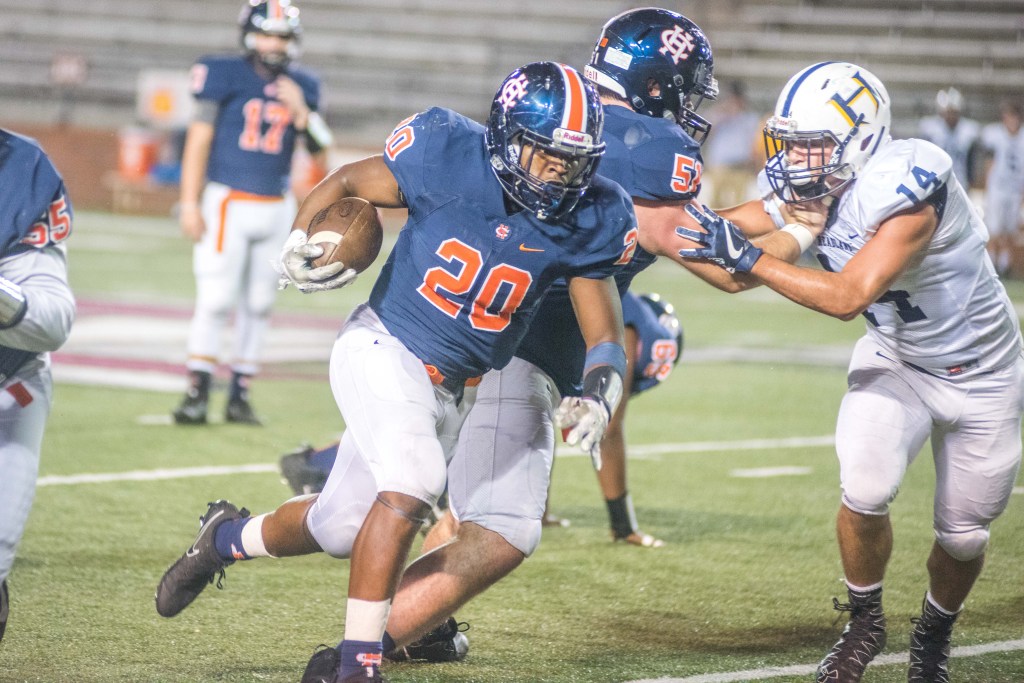 Charles Henderson High churned out 435 yards of total offense en route to a 45-12 win over Headland High Friday on Senior Night in Troy’s Veteran Memorial Stadium, improving to 5-4 overall and 4-2 in Class 5A, Region 2 standings.

The Trojans are at Northview of Dothan next Friday to close out the regular season, before hitting the road for the first round of the Class 5A, AHSAA state playoffs.

CHHS has 14 seniors on their roster, and for Head Coach Brad McCoy, he was happy for them to come away with a big win against a region opponent at home.

“For these seniors and these guys that have been in our program for four years, it was a nice win at home,” said McCoy. “This is also two wins in a row, that’s good, and we need this motivation going into next week and then certainly going into the first round of the playoffs.

“We have 14 seniors, and they have been a pleasure to be around. They are fun to coach, and they take the game of football serious.”

The Trojans took a 7-0 lead when senior quarterback Noah Lowery connected with junior tight end Kelshun Campbell for an 87-yard TD pass play, Cameron Bush added the extra point, and CHHS led 7-0 with 5:45 to go in the first quarter,

Headland’s K’Shun Stokes returned the ensuing kickoff 93-yards for a touchdown, the try for two points failed, and the score was 7-6 at the 5:37 mark.

Three plays later CHHS was on the board again as senior running back Jared Wilson broke a 39-yard run to the Headland 36, and one play later took it in from 35 yards out for the TD. Bush was good on the kick, and the Trojans led 14-6 at 4:31.

Lowery found Cobi Jones open for a 17-yard touchdown pass with 0:23 to go in the first half, Bush was good, and the score was 31-6 at the half.

The Trojans opened the third quarter with a 60-yard scoring drive, as Wilson took it in from one yard out and CHHS led 38-6. Lowery hit Campbell for a big 40-yard gain on that drive to set up the TD.

DQ Toney made a blazing run around right end in the Wildcat formation on the Trojans next possession, diving from the 5 and hitting the pylon with the ball outstretched for the TD, Bush was good again, and CHHS led 45-6 with 5:07 to go in the third quarter.

The Rams scored again to open the fourth quarter when Stokes took it in from 5 yards out, the try for two failed, and the score was 45-12 with 11:09 to go in the game, which held up for the final score.

In addition to Wilson’s 133 yards and three TD’s, Lowery was 9 of 14 for 191 yards and two touchdowns, Toney gained 31 yards and a TD, while Jamal Smith picked up 23 yards on the night.

In Class 5A, Region 2 play through games ending Friday night, Carroll of Ozark is in first with a 6-0 Region 2 record, Eufaula is 5-1, CHHS is in third at 4-2 and Greenville is 3-3. The Trojans will be on the road in two weeks for the first round of the state playoffs, potentially traveling to Lineville, Al., to face Central of Clay County.