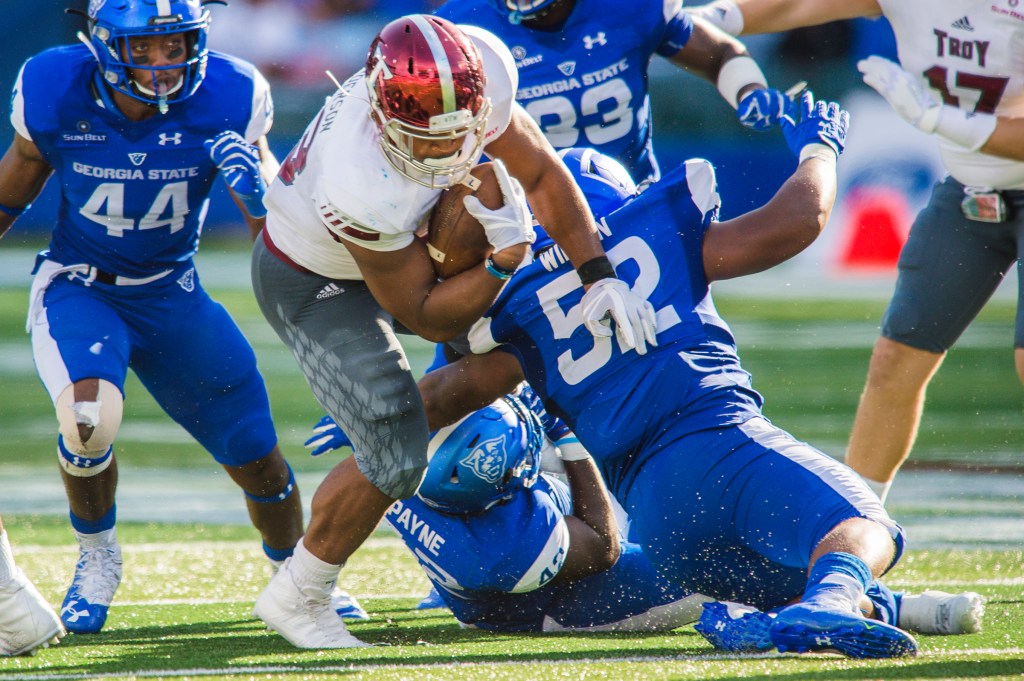 Troy running back Josh Anderson runs the ball for the Trojans during Troy's win over Georgia State on Saturday.

“We had a play that we thought would be a home run out the gate, and we really made an attempt to hit some balls down the field,” said head coach Neal Brown. “Some we hit, and some we didn’t, but I thought it set the tone. We wanted to be 1-0 this week. I wanted us to attack. We had a slow start, but it was important that the defense held them to three points and then, we were able to come back next drive and get it to seven points.”

Troy controlled the game from nearly start to finish to improve to 5-2 overall and 2-1 in league play. John Johnson gave the Trojans for good just over five minutes into the game as he showed some fancy footwork to cap a 49-yard reception from Silvers in what was the beginning of 34-unanswered points.

Silvers completed 25-of-35 passes and threw a pair of touchdowns with his lone miscue coming on an interception after his intended target slipped on the new turf at the old Turner Field. The senior signal caller doubled his touchdown total for the season as he connected with nine different teammates in the game.

Georgia State (3-3, 2-1) converted the interception into three points after taking over on the Troy 39-yard line. Those were the only points the Panthers would muster against the stingy Troy defense until 56 seconds remaining in the game. GSU ended the game with a 20-play, 82-yard drive after Troy emptied the bench; the Trojans had held the Panthers to just 225 yards heading into that drive.

Troy’s defense played behind the line of scrimmage for most of the afternoon as the Trojans finished with four sacks and 10 tackles for loss. Senior defensive end Seth Calloway had a career-best two sacks and Zo Bridges added a pair of tackles for loss.

The nation’s 12th ranked defense did not disappoint as the Trojans held Georgia State to just 1.6 yards per carry with only 33 yards on 52 carries. It marked the fifth time in seven games this season that Troy has held its opponent under 100 yards rushing.

Deondre Douglas found the end zone twice in the second quarter to push Troy’s advantage to 21-3 at the break. He capped an 11-play scoring drive with a 6-yard touchdown catch and then on fourth-and-2 later in the quarter took an end around 35 yards for his first career rushing touchdown.

Georgia State had a prime scoring opportunity at the end of the second quarter with a first-and-goal from the 5-yard line. However, Tron Folsom broke up a pair of passes and the Trojans stuffed the Panthers on two rushing attempts to turn the ball over on downs.

Troy head coach Neal Brown kept his foot on the pedal coming out of the break. After the defense forced a three-and-out on Georgia State’s opening drive of the half, Silvers completed passes of 42, 14 and 16 yards on Troy’s first three plays of the ensuing possession. Josh Anderson put a bow on the drive with a 2-yard score to put Troy up 28-3 just three minutes into the third quarter.

Anderson rushed for 57 yards on 13 carries in place of the injured Jordan Chunn. Jamarius Henderson caught five passes for 62 yards, while Damion Willis had four grabs for 43 yards.

Tyler Sumpter, who took over the place kicking duties this week, took care of the rest of the scoring for the Trojans with field goals of 27 and 21 yards.