Statement win: Goshen improves to 7-1 with 34-14 win over New Brockton 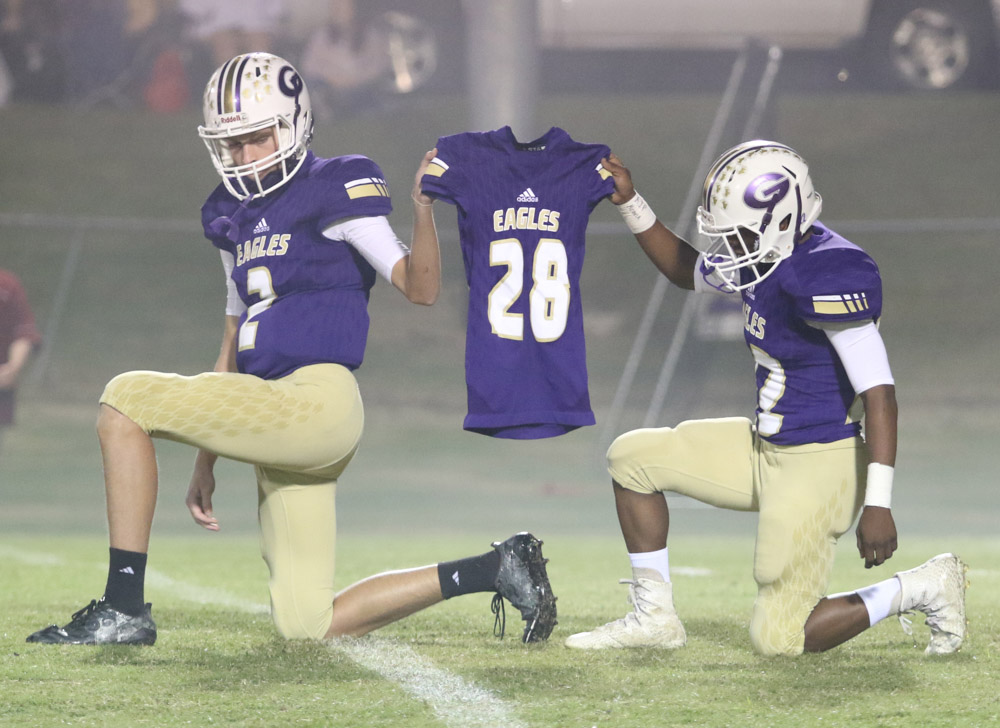 Goshen quarterback Brock Snyder, left, and Damion Passmore, right, pay tribute with all offensive and defensive players on the first play of the game Friday night for Goshen’s Christopher Chambers, who passed away this week.

GOSHEN – Nobody could remember for certain when the last time Goshen was 7-1 on the season, when they had this much talent, this much momentum, and this much promise, but for Head Coach Bart Snyder, who also is not exactly sure how many years he has been the head coach, it is all beside the point.

What matters to Snyder and the Eagles, who defeated New Brockton 34-14 Friday night in Goshen, is who is on the schedule next, and what will it take to beat that team, and the next, in their quest for a Class 2A state championship.

“To be honest I don’t even look at stuff like that,” said Snyder, who is believed to be in his 10th year as Goshen’s head coach. “We’ll celebrate this win and at two o’clock on Sunday, it’s in the past. Our focus is now Pike County. We don’t worry about the game behind us. We fix those mistakes and move on.

“I’m just proud of our guys, our fans, this is what they have worked hard to see and do. The season is not over, we have a long way to go, and a very good team coming up next week.”

With the win Goshen improved to 7-1 overall and 5-1 in Class 2A, Region 3, and with Luverne defeating Elba also Friday evening, there is a three-way tie for first place. The AHSAA will take into consideration a multitude of tie-breakers, and will notify the three teams as to who will be first, second and third between Goshen, Elba and Luverne.

Goshen received the opening kickoff and with the ball at their own 30, all 22 players on both offense and defense paid tribute to Goshen student Christopher Chambers, a 12-year-old 7th grader who passed away with cancer earlier this week.

Christopher led Goshen out on to the field Friday a week ago, and as all 22 players kneeled in tribute on the first play of the game, senior quarterback Brock Snyder and running back Damion Passmore held up a jersey, No. 28, the number dedicated to Chambers.

Senior placekicker Dawson Hamlin, who had five extra points, a field goal and five kickoffs not returned into the end zone on the evening, was good on his first PAT and Goshen led 7-0 with 10:11 to go in the first quarter.

The Eagles went up 14-0 to open the second quarter when Passmore scored from 10 yards out, and Hamlin put Goshen up 17-0 with 6:13 left in the first half on a 24-yard field goal.

New Brockton cut the lead to 17-7 on an 11-yard TD pass play from Caleb Griffin to Russell Weeks, with Griffin adding the extra point with 0:52 to play before halftime.

With less than a minute to play in the half Goshen marched 60 yards in two plays for a TD, when Snyder, who rushed for 76 yards and passed for 151 on the evening, broke a 40 yard run to the Gamecock’s 20, and then hitting Zach Alford on a 20-yard TD pass play for the 24-0 lead at the half.

Passmore, who rushed for 166 yards on 12 carries, scored again on a 15-yard touchdown carry, Hamlin kicked, and Goshen led 31-7 with 4:01 to go in the third quarter, but New Brockton added a TD on a 13-yard pass from Griffin to Jy’shan Nelson and the score was 31-14 with 0:12 remaining in the third.

Goshen will host 3A Pike County High of Brundidge next Friday and travel to Brantley to close out the regular season before the first round of the Class 2A playoffs.