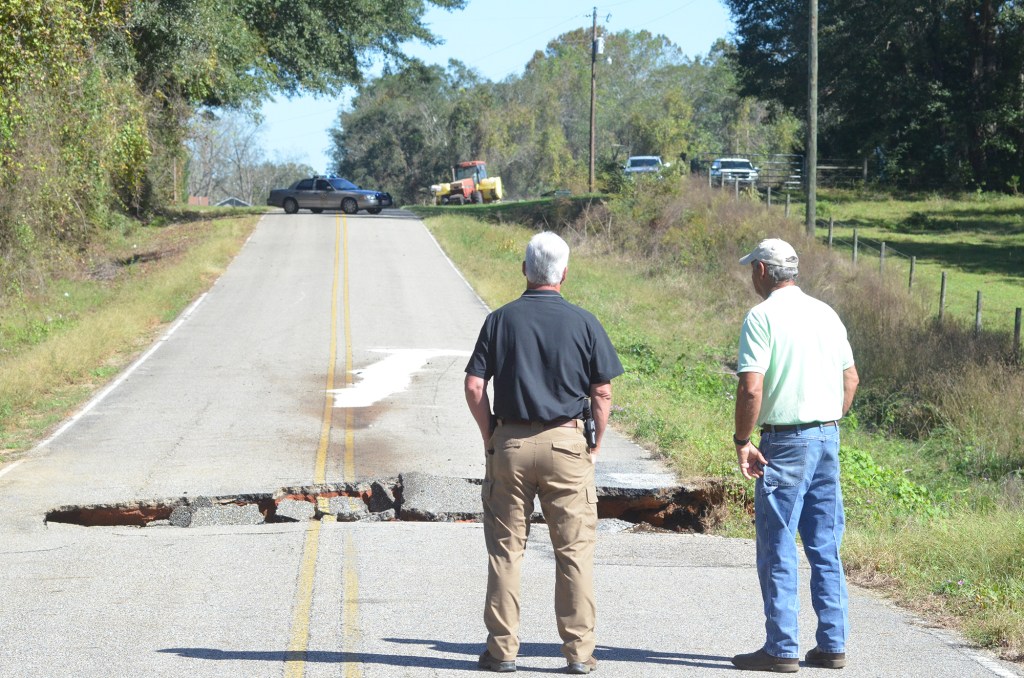 The Pike County Road Department is seeking emergency funding to expedite the repair of a road that collapsed Wednesday near Brundidge in the Tennille community.

“We think that the damage was mostly caused by the recent hurricane,” said Russell Oliver, county engineer. “We think this was caused by increased flows associated with those events. We’ve requested through the Alabama Department of Transportation (ALDOT) to get funding from the Federal Highway Administration (FHWA) emergency relief program.”

The county became aware of the road collapse at approximately 12:30 p.m. Wednesday when James Powell of Meeks Termite and Pest Control wrecked due to the collapse while servicing homes in the area. Powell was taken to Troy Regional Medical Center and released Wednesday afternoon.

The road, County Road 4430 (also known as Tennille Road) was immediately closed off once officials became aware of the problem.

The process the county is going through now to repair the road is the same process taken earlier this year to repair a collapsed bridge on County Road 2201, one of the main roads to Goshen.

If approved by the FHWA, Oliver said the Road Department will again come to the commission and seek to pre-approve actions for the road so that the situation is further prolonged waiting for regular commission meetings.

“This is definitely an emergency,” Oliver said. “We don’t know how the timing will compare with the Goshen bridge because they are two different types of structures.”

District 4 Commissioner Chad Copeland, who represents the district where the road failure occurred, said ALDOT visited the scene Wednesday and that the county was waiting for FHWA officials to come down and assess the scene on Thursday.

“The road had been inspected and was on a list for repairs, but it wasn’t for immediate action – it was for routine maintenance,” Copeland said. “This is an effect of not having proper funding to do maintenance – it’s a matter of what you put off to do what?”

Oliver said the county had some men working in that area earlier in the day and that the road had not collapsed at that point in time, but he could not say how long the road had collapsed before the crash.

The portion of the road that is collapsed is exactly i.5 miles east of the railroad tracks, Oliver said, in between county roads 4425 and 4442.

No detour signs are up at the failed portion, but Oliver said residents in the area can use those roads to bypass the area until the issue is resolved.