Back on track: Trojans pick up key region win over Rehobeth 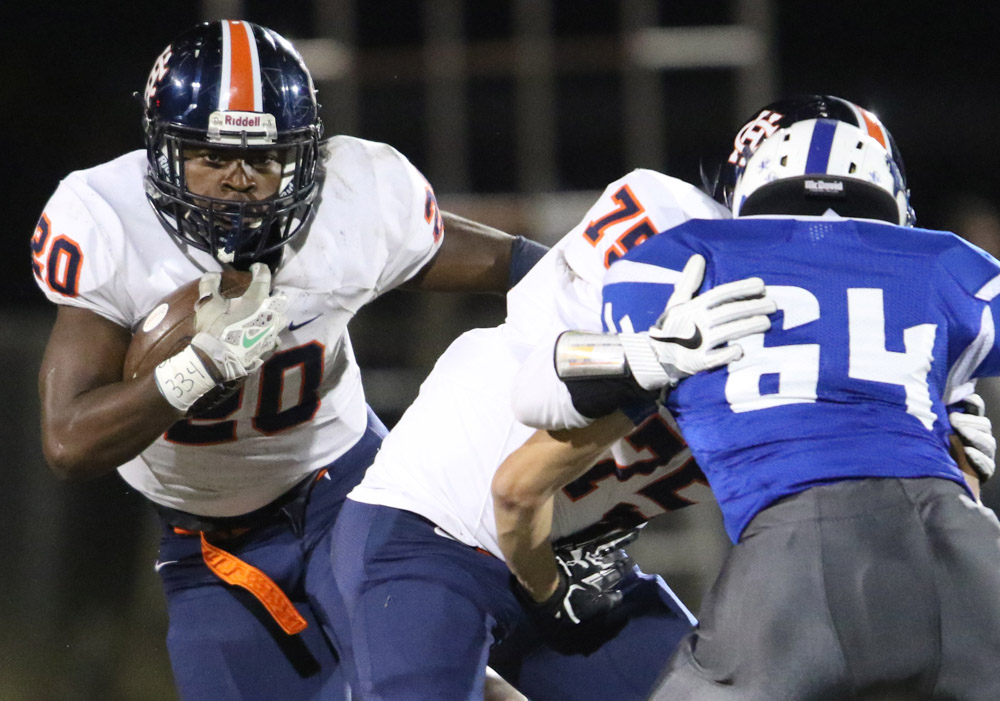 REHOBETH – Charles Henderson High senior running back Jared Wilson rushed for three touchdowns, gained 104 yards and broke the 1,000 yard barrier for the season in a 28-9 win over the Rehobeth High School Thursday night in Rehobeth.

The Trojans trailed the Rebels 9-7 at halftime, but rallied for three touchdowns while the defense was stellar in the Class 5A, Region 2 win.

With the victory, CHHS improves to 4-4 overall and 3-2 in Class 5A, Region 2, while Rehobeth slips to 3-6 overall and 2-3 in the region, with one remaining region game for CHHS against Headland in Troy next Friday night.

Entering Friday’s games, Carroll of Ozark leads Region 2 with a 5-0 record, Eufaula is second at 3-1, while CHHS is at 3-2 in region play. The top four teams of each region advance to the state playoffs in the AHSAA.

“Early on I thought we were going to be one of the biggest embarrassments we could be,” said CHHS Head Coach Brad McCoy. “But I let them know at halftime it was not going to happen on our watch. Sometimes you just got to wake young people up and let them realize their potential and their ability, and I think our guys realized that and woke up and started making plays, and understand that Rehobeth was not about to lay down. This was going to be their Super Bowl. Our guys work up and played hard, and I am certainly proud of them.”

Both teams were held scoreless after one full quarter of play, but Wilson capped off a 60-yard drive with an 8-yard touchdown to open the second quarter, Cameron Bush added the extra point, and CHHS led 7-0. A big 34-yard pass play from Noah Lowery to Kelshun Campbell gave the Trojans first-and-goal at the Rehobeth eight to set up Wilson’s run.

Rehobeth scored their only TD on a loose fumble which Rebel defender Jimmy Godwin picked up and carried 30 yards into the end zone, Keegan Dutton added the PAT, and the score was 7-7 with 7:20 to go in the first half.

The Trojans were forced to punt in the final minute of the first half, but the snap went high over the punter’s head and out of the end zone, giving a safety to Rehobeth, and a 9-7 lead with 0:13 to go in the first half.

CHHS wasted no time putting points on the board in the third quarter, as Lowery hit Cobi Jones on a 40-yard pass play to give the Trojans the ball at the Rehobeth 2, and two plays later Wilson bulled his way in for another TD, and a 14-9 score following the Bush extra point.

“I was very proud of Jared, the offensive line, our coaches, and everyone that made the trip over here on a Thursday night,” said Coach McCoy. “It means a lot to have them in the stands and cheering us on. We’ve just got to look forward to the next one.”