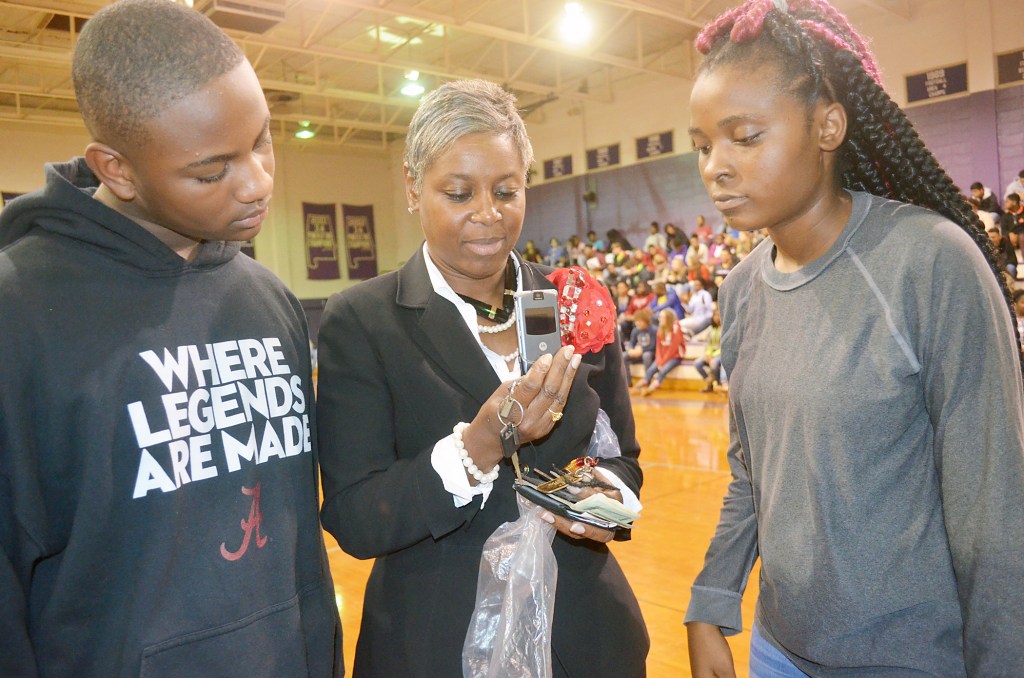 Carolyn Tyus, a volunteer with Mothers Against Drunk Driving, takes up personal items from Paxton Flowers and Cherokee Myhand as part of her presentation at Pike County High School on Tuesday. Tyus’ son was killed by a drunk driver in 2008.

Carolyn Tyus asked for three student volunteers from Charles Henderson Middle School to come up and help her with a demonstration Tuesday morning. Then she told them to hand over their wallets, keys, belts and other personal items, which she then placed in a plastic sandwich bag and told them to sit back down.

Then Tyus told the crowd of students in attendance her story of how she lost her son when a drunk driver wrecked his vehicle – she still has his wallet and keys in a small plastic bag she was given after the incident.

Tyus was just one of the many officials at CHMS that morning, representing Mothers Against Drunk Driving (MADD). She and officials form the Alabama Beverage Control (ABC) Board and various law enforcement agencies visited both CHMS and Pike County High School to spread the message about the dangers of drinking underage.

Superintendent Lee Hicks told the students about his own experience with underage drinking while principal at Prattville High School.

“One of my students – he wasn’t a bad student, either – went down to the Alabama River one day and had some of that ‘liquid courage’ as they call it and decided to show his friends he could swim all the way across,” Hicks told the students. “He made it about halfway and then he was gone.”

Dean Argo of the ABC Board was the main speaker at the program, warning students that alcohol can impair judgment at any age, but is especially harmful to young minds.

“I wish this program wasn’t necessary,” Argo said. “But unfortunately, it is. One in three students have had a drink of alcohol by the time they’re in the eighth grade and three out of four high school seniors in Alabama have already had alcohol.”

Argo encouraged students not to be followers, but to be a leader in their homes and schools and stand fast not to accept alcohol.

Marvin Williford of the State Bureau of Investigation with the Alabama Law Enforcement Agency warned that both the underage drinkers and those who supply them would both have to go to jail if caught.

When Argo asked the student crowd at CHMS whether they had a brother or sister that liked to drink and party, many hands shot up across the bleachers. When he followed up by asking how many of those siblings were underage, few hands went down.

“Don’t follow their path,” Argo said. “Tell them what we talked about today and make better choices. If they’re caught, they will go to jail.”

Argo also asked the students what they thought the most prevalently abused drug is.

“Weed,” one girl answered. “Cocaine,” said a boy on the other side of the gymnasium.

“Most people don’t think of alcohol as a drug,” Argo said. “But by definition, it’s a depressant.”

The students were given pledge cards that they could sign their name to promising not to drink until they’re at least 21.

“I hope that you never drink alcohol,” Argo said. “But we want you to at least wait until you’re of drinking age.”